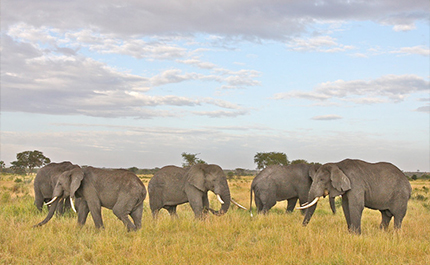 NAIROBI, Kenya, January 28, 2013 -- African Wildlife Foundation (AWF) commends the Tanzanian government's recent decision to withdraw its proposal to the Convention on International Trade in Endangered Species of Wild Fauna and Flora (CITES) to sell some of its ivory stockpile. CITES is the international agreement that regulates the trade of endangered plants and wildlife; more than 176 countries are signatories. Ahead of CITES' 16th Conference of Parties, Tanzania had submitted a proposal to downlist the status of the country's elephants and to allow a one--time sale of more than 100 tons of ivory to China and Japan. The government's decision to withdraw the proposal comes in the midst of an elephant--poaching crisis stemming from a growing demand for ivory primarily in Asia.

"By withdrawing this controversial proposal, Tanzania has reaffirmed its commitment to protect a species integral to natural ecosystems and one that the tourism industry depends on," said African Wildlife Foundation CEO Patrick Bergin. "The decision is an important step in the right direction to curb demand and stop the killing, but the issue of illegal ivory trafficking in Tanzania remains of great concern as elephants are still being killed at an alarming rate. African Wildlife Foundation continues to collaborate with wildlife authorities and local partners across the continent to maximize anti--poaching efforts that combat the illegal wildlife trade." Tanzania holds one of the largest elephant populations in Africa.

AWF has worked in Tanzania for more than two decades, not only building the capacity of wildlife authorities and game scouts, but also supporting the establishment of wildlife management areas and other projects that make conservation worthwhile for local communities. Manyara Ranch Conservancy, a 44,000--acre migration corridor connecting Tarangire and Lake Manyara National Parks, has become a model of conservation success in east Africa, one that includes eco-tourism enterprise that engages local people in protecting animals and their habitat. More recently, AWF has implemented an anti-poaching task force in partnership with Tanzania National Parks, the Ngorongoro Conservation Area Authority, the Tanzania Police Force, and the State Attorney's Office to improve the apprehension rates of suspected poachers and strengthen the sentences of those found guilty. Under the new initiative, the task force has already apprehended six individuals suspected of poaching crimes in northern Tanzania.

Upon withdrawal of its proposal, the Tanzanian government stated that it had planned to use the profits to fund elephant conservation projects. CITES allowed ivory sales by other African countries in 1997 and 2008 but rejected a similar proposal submitted by Tanzania in 2010. AWF representatives will be attending CITES' 16th Conference of the Parties, to be held March 3 -- March 14, in Bangkok, Thailand.

About African Wildlife Foundation
Founded in 1961, the African Wildlife Foundation (AWF) is a leading conservation organization focused solely on the African continent. AWF's programs and conservation strategies are based on sound science and designed to protect both the wild lands and wildlife of Africa and ensure a more sustainable future for Africa's people. Since its inception, AWF has protected endangered species and land, promoted conservation enterprises that benefit local African communities, and trained hundreds of African nationals in conservation--all to ensure the survival of Africa's unparalleled wildlife heritage. AWF is a nonprofit organization headquartered in Kenya and registered as a 501(c)(3) in the United States. For more information, www.awf.org.