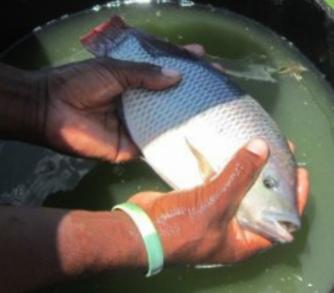 Overfishing threatens people and wildlife along the Zambezi River.

The Zambezi river is home to more than 200 different species of fish, all of which contribute to the health of the local ecosystem. Unfortunately, rapid human settlement, pollution, and overfishing have taken a toll on biodiversity, leaving the ecosystem unbalanced and locals without a source of food or income.

Protecting the environment and providing livelihoods through fishing.

African Wildlife Foundation, together with the local community and other partners, is simultaneously protecting the ecology of the Zambezi River and providing alternative livelihoods through the Mwandi Fish Farm, a sustainable aquaculture enterprise.

Fish native to the Zambezi River are bred in ponds, and some are farmed and sold while others are released into the river to replenish diminished fish populations. This will result in greater food security, economic opportunities, and biodiversity in this region.

As of September 2012, 13 fish ponds had been built. Water pumps have been installed and villagers can now access water from taps instead of from the river, which reduces injuries due to conflict with crocodiles. Other enterprises, such as chicken farming, have been incorporated into the overall project. For example, waste from the poultry is used as fertilizer to speed the growth of plankton and as feed for fish, while the poultry is sold for profit.

And, since Mwandi began operations, 50,000 fingerlings have already been released into the Zambezi. Additionally, AWF helped the fish farm sell an additional 50,000 for a state prison fish farm and is locating other interested customers.