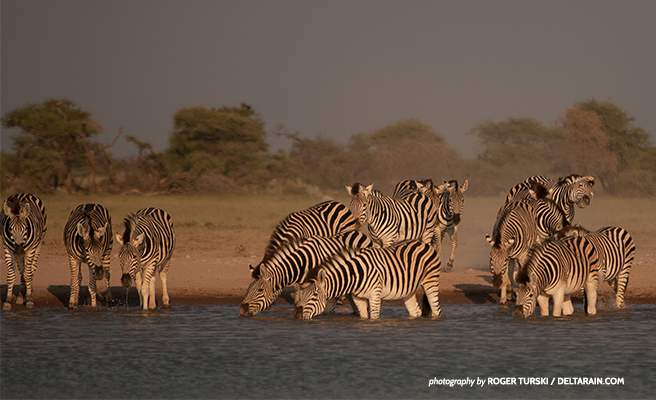 With the world currently experiencing many of its effects, it is a critical time for drawing attention to the threats of climate change. In Africa, prolonged droughts have been felt across the continent. Between 2007 and 2009, severe droughts in Kenya and Tanzania significantly reduced local communities’ crop yields and livestock productivity. But it also had a big effect on the region’s wildlife.

Results from an aerial census—conducted by participating wildlife authorities with support from AWF—indicated there was a dramatic decline in a number of large herbivore species from 2007 to 2010. Around Amboseli National Park, for example, wildebeest declined by about 83 percent (from 18,538 to 3,098 individuals) while zebra and buffalo declined by 71 percent and 63 percent (from 15,328 to 4,432 individuals and 588 to 231 individuals) respectively. This decline was attributed to the prolonged drought experienced in the landscape.

While some parts of the continent were experiencing prolonged drought, severe flooding was occurring in other regions. The flooding hurt food and livestock production and destroyed many homes and villages across Africa. As a result, international food aid was provisioned to some of the most badly hit countries.

Climate change has even led to increased conflict in some parts of Africa, including human–wildlife conflict and human–human conflict. Disputes are mainly over water resources, which are diminishing because of less rainfall. In places like northern Kenya, this has actually become a national security concern for the government, as pastoral communities engage in small arms proliferation to be able to guard water points. Some communities go further and invade protected areas for pasture, banditry and tribal attacks.

This is why AWF incorporates climate change adaptation and mitigation work into our conservation programming. We make sure every community we work with knows how to adapt to the challenges arising from climate change and understands the need to adopt these new techniques. In many of these communities, retaining livestock is a matter of prestige and tradition—yet many of these pastoralists don’t know how to withstand the adverse weather or what that means for their livelihoods. To address this, AWF has provided communities with livestock rearing support and greater market access, helping pastoralists earn a profit by selling some animals and keeping smaller herds of healthier livestock instead of large herds that struggle to survive drought conditions.

With climate change such a reality on the African continent, AWF was understandably very excited about being featured in an episode of this season’s Years of Living Dangerously. We want to raise awareness about the impacts of climate change worldwide, not just with rural communities in Africa. While filming the episode, I shocked Aasif Mandvi—the actor/comedian who was investigating climate change’s effects on species extinction—when I informed him that Africa is already losing around 30,000 elephants a year… and that climate change is making the problem worse.

A time for government action

It is not too late for us to reverse these trends—there is still hope that something can be done. However, everyone must play their part in this reversal. That includes governments: accepting climate change is real and therefore creating climate change resilience opportunities for their communities; putting new adaptation and mitigation measures in place; and helping communities find sustainable ways to protect and promote the conservation of natural resources like water and pasture.

AWF is making sure to incorporate climate change into our advocacy efforts. In countries where we operate, we work closely with governments to ensure the successful adaptation and mitigation measures we’ve piloted there are adopted by communities and scaled up.

Recently, AWF entered into a partnership with the African Union Commission to expand upon such collaborations. Through the partnership, AWF will be able to engage with governments across the continent at a high level, helping to ensure the right policies are put into place to create climate-change-resilient communities.

See how climate change is affecting Africa’s elephants with my interview on Years of Living Dangerously.