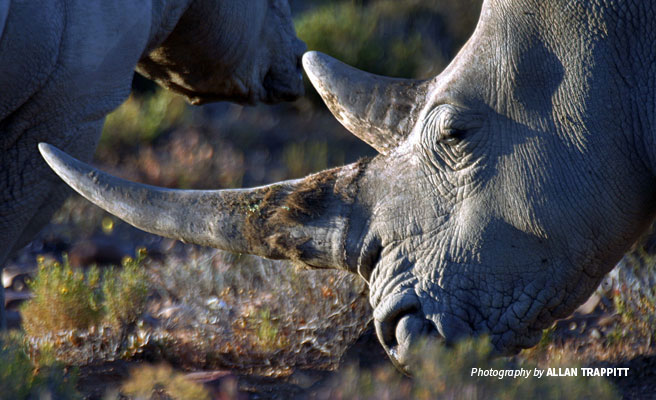 No scientific evidence proves rhino horn to be a magical cure-all for ailments ranging from cancer to hangovers, yet poachers decimate rhino populations. In demand centers across China and Southeast Asia, an upwardly mobile market continues to seek out rhino horn as a high-status multipurpose medicine.

This recent surge in demand has seen the number of slaughtered rhinos increase dramatically. In 2007 just 13 rhinos were killed in South Africa, and in 2014 this figure rose to 1,215 — the highest the country has ever recorded.

Experts have attributed these statistics to a combination of geopolitical and socioeconomic factors including consuming nations’ growing presence in Africa, the involvement of organized crime, and the emergence of Vietnam as a primary importer.

African Wildlife Foundation and WildAid partnered with local Vietnamese NGO CHANGE to expand the successful “Stop the Demand” campaign into Vietnam, raising awareness about rhinos and the horn trade. Available in English, Vietnamese and Mandarin, “The Sickening Truth” featured graphic footage of a rhino left for dead after poachers hacked her horn off (viewer discretion is advised). The public service announcement was released across television networks as well as social media sites.

To better understand the dynamics of Vietnam’s growing rhino horn market, the campaign partners and the Nielsen Corporation interviewed 400 residents in Hanoi and Ho Chi Minh. The same baseline survey was replicated in 2016 to assess changes in attitudes and beliefs and to measure the impact of the campaign.

In 2016 only 9.4% of respondents believed that rhino horn can cure cancer, compared to 34.5% in 2014. While this suggests that the campaign successfully eroded the idea of the horn’s medical efficacy, the realities pushing locals towards traditional forms of medicine to treat cancer persist. Over 150,000 new cases are diagnosed in Vietnam annually, and a shortage of radiotherapy machines in the country means many people die without this effective treatment.

More people understand that rhino horn is made of keratin

Only 31% of respondents in 2014 were aware that rhinos are killed for their horn. By 2016, the number of respondents who knew this fact had risen by 74%. That rhino horn is composed of substances found in hair and fingernails was only known to 19% of respondents in 2014. Thanks in part to the Nail Biters campaign, awareness about this increased by 258% in 2016. Based on the simple idea that “Rhino horn has nothing your own nails don’t have,” the posters showed international and Chinese celebrities biting their nails. People were encouraged to make a similar poster of themselves on a mobile site and share these on social media: 98,500 users generated similar nail biting posters and shared them 16 million times.

Another survey by World Wildlife Fund and TRAFFIC in 2013 found that horns are consumed by “educated, successful and powerful individuals” — a significant market that could be difficult to destabilize. To commemorate World Rhino Day this year, AWF and WildAid released a PSA with renowned Chinese collector Ma Weidu condemning China’s culture of rhino horn collectibles.

While awareness-building has significant benefits in stopping demand, it must be supported by global law enforcement. Although Vietnam is revising its penal code to strengthen penalties for wildlife crime offenses, South Africa’s proposal to permit domestic trade of horns may be hindering the progress.