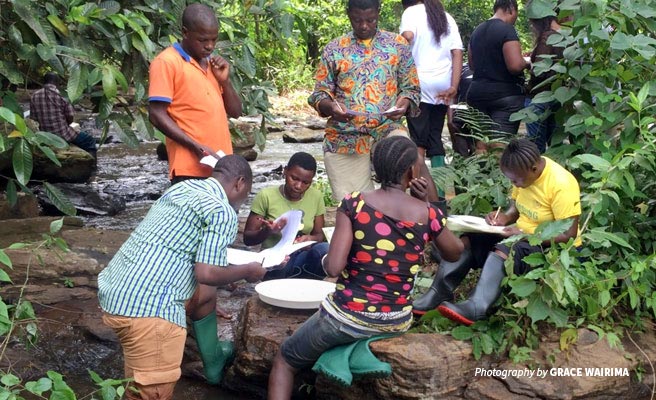 Down the slopes of the Udzungwa Mountains, Alvinus Linus Ngwale and his colleagues are enthusiastically wading through a river. Each wearing gumboots, they look focused as they fish out small aquatic invertebrates from Mchombe River in Kilombero District.These are men and women from Mngeta Village, Kilombero District in Tanzania's Morogoro Region. They belong to a local group known as Juwamange, comprising 30 water users on a single mission—saving Mchombe River using the Mini Stream Assessment Scoring System (miniSASS), a simple biomonitoring tool to measure river health.

“We are here to assess the level of pollution of the river. Few dishonest members of the community wash their clothes in the river, and others have decided to cultivate crops near the river banks, leaving our only source of water in peril," says Ngwale, who also serves as the chairperson of the group.

Even when the group has enacted laws to keep the unscrupulous villagers at bay—anyone found washing in the river is slapped a TS 50,000 penalty—the river is still fast becoming polluted.

However, engaging communities to implement a practical bottom-up community-led approach in water management is no simple task as community priorities vary.

In Kilombero and Kilolo District Councils, the African Wildlife Foundation, under the Sustainability and Inclusion Strategy for Growth Corridors in Africa (SUSTAIN-Africa) and in collaboration with the Rufiji Basin Water Office (RBWO), has formed two water user associations in Mngeta Sub-catchment. The program follows the legal and constitutional stipulations of Tanzania's National Water Policy of 2002 and the Water Resources Management Act, 2009. This joint venture between AWF and RBWO empowers the two communities, giving them control of the local water management through miniSASS and allowing them to monitor the health of their local river.

Reliable water quality and river health indicators are often challenging and expensive to derive. With miniSASS, one can achieve accurate results on the health of the river without complicated technology or the skills required to carry out a full assessment using the South African Scoring System (SASS), an aquatic biomonitoring tool used in South Africa for over 30 years

Dr. Lulu Tunu Kaaya, a lecturer in freshwater ecology from the University of Dar es Salaam, is instrumental in educating the two communities on miniSASS. She says the technology provides an easy and cheap method of ascertaining the disturbance on water systems.

“Once you have collected a sample you look for the different bug groups and score whether they have been found. The score then tells you the health class of the river, ranging across five categories from natural to very poor,” explains Dr. Kaaya. According to Ngwale, Mchombe River was placed in category E—clear evidence of the high level of pollution in the communities' only source of water.

Detailing how the miniSASS is conducted, Dr. Kaaya says the locals have to wade in through the river for at least 100 meters to establish its biotope. “You have to kick the rocks with a view of making the bugs emerge from the river bed. These would then be placed on trays to be checked on how they have been affected by assigning them into their ecological categories,” she explains.

According to Dr. Kaaya, reasons for the changes in river health over space and time can be explored based on the dominant land use of the area. She adds, "Other activities can be observed on the interactive satellite map, and supplemented by knowledge of their community."

Damas Patrick Mbaga, a hydrologist with AWF, says the collection of miniSASS data is a perfect illustration of citizen science, where a group of volunteers with no formal training in the aquatic sciences can undertake a source-to-sea assessment of a river's health.

>Learn more about other conservation projects run through the SUSTAIN-Africa program, an IUCN initiative led by AWF.

Grace Wairima Ndungu is a former Senior Communications and Advocacy Officer at African Wildlife Foundation. She supported the implementation of internal and external communications strategies and helped strategize on ways to promote AWF’s media and advocacy activities.