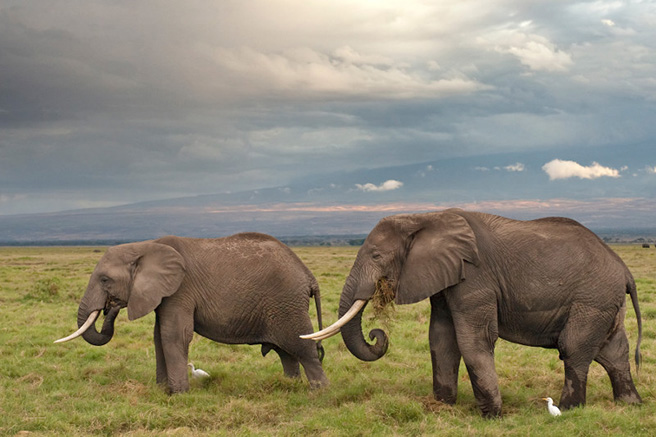 More than five years ago, African Wildlife Foundation (AWF) began our  Conservation Lease program, with the goal of protecting land for wildlife while also maintaining considering interest of the communities that own the land. Most recently, AWF signed more than 500 new leases with the local Maasai community to protect more than 5,000 acres of critical wildlife habitat.

With the new leases, today, AWF has protected more than 25,000 acres in the Amboseli ecosystem through this program.

The land lease program began in 2009 in response to land conversion as a result of growing populations, development, and changing lifestyles, land was increasingly being sold off to developers and non-conservation fragmented habitats. As a result, wildlife movement was being blocked and human-wildlife conflict was increasing.

With a desire to find mutually beneficial solutions, we worked with the communities in the Amboseli ecosystem to establish the land-lease program to give both elephants and people a new lease on life. This was the first time this was ever done in Amboseli and because of our long-relationship with the Kimana Community, they were willing to pilot this program, it has since expanded exponentially.

Amboseli National Park is home to about 1,400 elephants. But, elephants are migratory animals and they need large areas for their survival. As a result, they spend a significant amount of time out of the Park, on community land, in search of  food, water, and habitat. Through our lease program, AWF has been able to secure some of the key elephant dispersal areas while simultaneously providing benefits to communities. . The newest leases will protect the area—known as the Kitenden Corridor—which links Amboseli National Park to Tanzania. By securing this corridor, we can ensure safe movement for wildlife and communities living near them.

While wildlife gets more space, people are compensated monetarily. AWF literally pays for elephants to use this land (a payment for ecosystem service)—much like you and I would pay to rent a home.

> Read the release for more information