Eric Reson was African Wildlife Foundation's ecologist in the Samburu landscape. Prior to taking this position, he was a participant in AWF's Conservation Management Training Program. 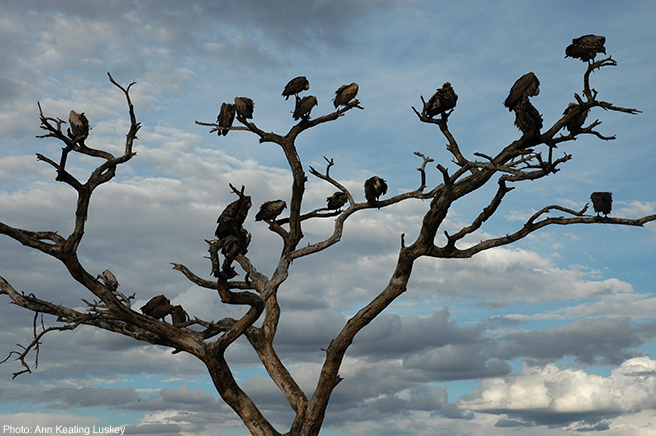 Research published last week in the journal, “Conservation Letters,” indicates the eight vulture species in Africa have experienced declines of more than 80 percent in their populations.

Africa is following an unfortunate precedent: In Asia, before any action was taken to reverse the decline of the Gyps species of vultures, more than 95 percent of the population had crashed. African countries are already on borrowed time—to mitigate any further losses of vultures, interventions should be quick and based on sound science. If substantial attention is not given by governments and other concerned entities, these creatures will likely vanish on our watch.

The decline of Africa’s vulture species is attributed mostly to anthropogenic activities, such as poisoning, persecution and habitat loss leading to lack of vulture forage. Boasting unique adaptations, vultures are considered to be among the most successful scavengers in the ecosystem. Soaring flight allows them to cover long distances, strong eyesight lets them spot potential food sources from far away and low pH levels in their stomachs enable quick digestion of the rotting meat they consume without issue. With the unresolved threats facing them, however, these adaptations have significantly accelerated vultures’ demise. Their powerful eyesight, for instance, often makes them the first victim of a poisoned carcass.

The decline of vultures will have serious implications on the environment, economy and ecological systems. Studies show that vultures clear up to 70 percent of the carcasses in the Mara–Serengeti ecosystem, for example. Considering the amount of carcasses that piles up during the famed wildebeest and ungulate migration from the Mara to the Serengeti, vultures clear a substantial amount of carrion that would otherwise rot and spread diseases to human and livestock. 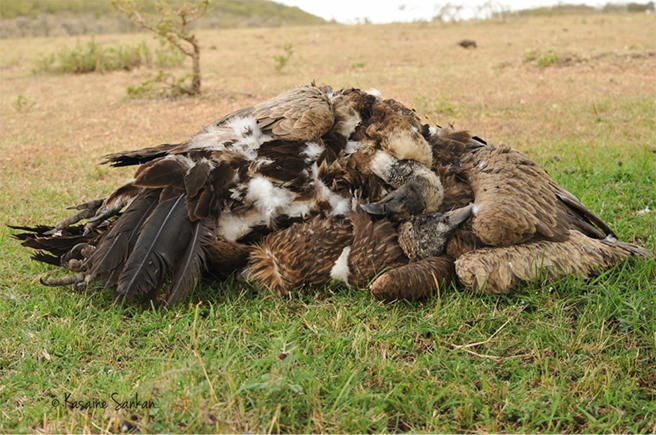 A group of vultures died as the result of poisoning after ingesting a highly toxic carbofuran.

It’s also been found that the tragic vulture decline in Asia has led to an increase in feral dogs and a high human risk of rabies. Similar studies recently conducted in Kenya’s Laikipia region indicated an increase in other scavenging species, particularly hyena, as a result of vulture decline. Such situations have implications both on the ecosystem and on community livelihoods. An increase of other scavenging species, for example, may increase human–carnivore conflict and hence may accelerate the occurrence of poisoning—creating a vicious cycle whereby more vultures continue to die at the hands of humans.

I developed a keen interest in vultures while working on my master’s at Clemson University and conducted research to determine the attitudes of the Maasai pastoralist toward these scavenging raptors. My research showed that, historically, communities had held generally positive attitudes toward vultures and favored their conservation. Vultures hold cultural significance to the Maasai: Their feathers were used to make headdresses and arrow ends, and some vulture species were associated with warriors because of their strength. Further, because vultures are not harmful to them like other species, such as carnivores who kill their livestock, their attitudes had typically been positive.

Unfortunately, vultures’ cultural importance is quickly disappearing due to community diversification and a change in lifestyle. These days, the younger Maasai are detached from vultures and the need for their conservation. Their activities also remain detrimental to vultures. For example, a Maasai pastoralist may poison carnivores in retaliation for livestock loss. As a result, vultures will die through secondary poisoning. 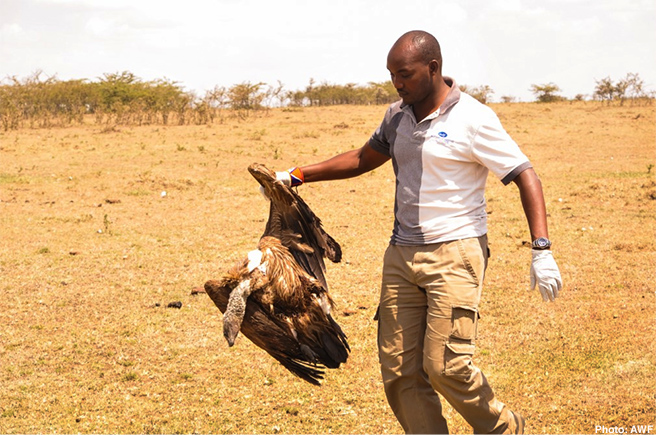 A vulture is collected for lab examination to determine the substance used as poison.

Increasingly, communities find no direct benefit related to vultures, either, which has led to persistent negative perceptions toward them. One will quickly notice this widespread negative perception when you talk about vultures. People’s first question is always: “Why? Why research or protect vultures and not another, important species?”

As the latest findings show, however, we are at an urgent point in terms of vulture conservation. People must move from asking, “Why?” to “What should be done?” Some suggestions on how African governments can work to turn this population decline around: