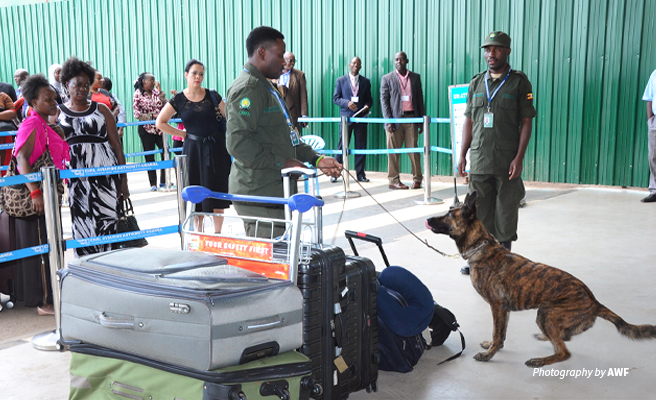 Uganda sits pretty as the pearl of Africa. It is beautiful, green, and fertile, and it is the region’s biggest producer of tropical fruits such as bananas, pineapples, and avocados. The country’s serene protected areas and iconic wildlife species add to its beauty and attract both local and international tourists. Tourism is a major driver of the country’s economy and makes a significant contribution to its GDP.Unfortunately, this is under threat with the proliferation of illegal wildlife trade in the region. Uganda is used by wildlife traffickers as a conduit, linking source countries with exporting countries such as Kenya and Tanzania. That is why African Wildlife Foundation has deployed its highly trained detection dogs to the Entebbe International Airport. The dogs have been successful in sniffing out illegal wildlife products with over 130 finds since they started working in December 2016.

To increase the impact of the canine detection units in reducing wildlife trafficking in the country, they must be supported by robust prosecution and deterrent penalties of persons arrested. Therefore, as a follow up to the Canine Evidence Conference held in March 2018 at the AWF headquarters in Nairobi, AWF, and the Uganda Wildlife Authority held a Canine Evidence Retreat focused on “Enhancing Prosecution of Persons Arrested by Use of Detection Dogs” in Entebbe, Uganda from June 13-14, 2018. The retreat was funded by the U.S. Bureau of International Narcotics and Law Enforcement Affairs and canine handlers, prosecutors, investigators, and intelligence officers dealing with wildlife crime in Uganda. 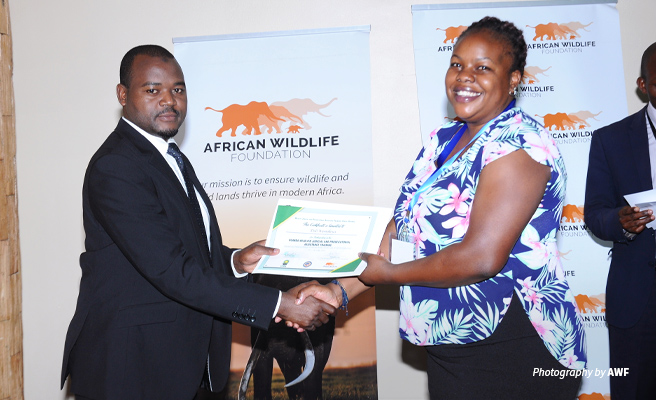 In addition to understanding the challenges faced by Uganda Wildlife Authority’s Canine Unit Operations and Prosecution Unit Operations, the retreat brought stakeholders together to come up with strategies that ensure successful prosecution of cases where canine evidence is involved. The Canine Unit grapples with a lack of resources in terms of manpower and the number of detection dogs, compounded by poor coordination between the Prosecution Unit. This in turn leads to lack of knowledge on court proceedings within the Canine Unit. Other challenges include limited species knowledge when identifying wildlife products by other security agencies and a lack of prosecutorial support when the finds involve small quantities of ivory such as beads and bracelets.

The wildlife authority’s Prosecution Unit lacks the skills in handling and appreciating canine evidence due to lack of experience. Insufficient expertise of the canine handlers as expert and eye witnesses as well as the judiciary’s laxity to rely on canine evidence also strain the impact of the law. Meanwhile, bureaucratic investigative procedures also lead to tampering with the canine evidence which in turn compromises cases.

To address these challenges, the Ugandan canine handlers, prosecutors, and investigators at the retreat agreed on a strategy that would lead to the successful use of canine evidence in court. To enhance prosecution, the participants devised action plans to streamline the use of detection dogs for the investigation of wildlife crime, enhance competence and professionalism of canine handlers, wildlife crime investigators, and prosecutors as well as enhance inter-agency collaboration and consolidate the collection, storage, and management of exhibits.

The participants also agreed on the next steps to ensure that the strategy is implemented. They suggested the improvement of collaboration and coordination both within the wildlife authority’s different departments and externally with other relevant security stakeholders. Additional measures for successful prosecutions include testing the use of canine evidence in courts to improve the skills of the prosecutors, training and empowering of dog handlers both as expert and eye witnesses, and establishing exhibit management systems in coordination with all security stakeholders involved in handling wildlife exhibits.

The key outcome of the retreat was to strengthen canine, investigation, and prosecution units in the handling of canine evidence wildlife crime cases. It also aimed to bring stakeholders together to ensure the successful use of detection dogs in wildlife law enforcement in Uganda. Following the retreat, the relevant agencies will work towards enhanced capacity and robust law enforcement to ensure effective investigations, prosecutions, and sentences that are deterrent enough to discourage criminals from trafficking illegal wildlife products in Uganda.