These dogs are taking on wildlife trafficking in Botswana 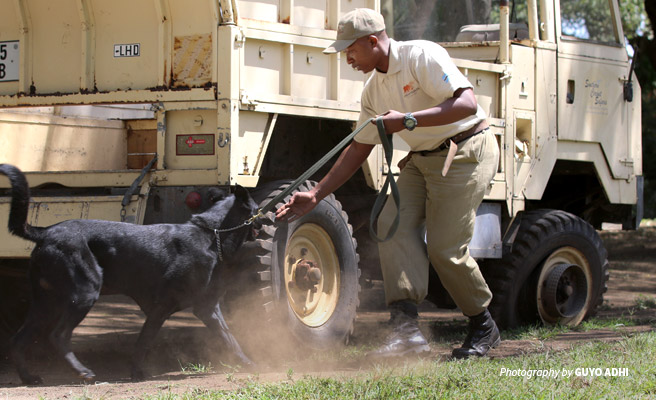 Up to 130,000 elephants roam the wild lands of Botswana – and that is not counting transient herds moving across country boundaries in the region. As a significant range state, Botswana was the only nation in southern Africa to support a total and permanent ban on the ivory trade at the 2016 CITES conference.

The country made another landmark contribution to the continent’s mission to protect keystone wildlife species in November, when 15 of Botswana’s Department of Wildlife and National Parks rangers graduated from African Wildlife Foundation’s Canines for Conservation program.

Following almost two-and-a-half months of intensive training led by the program’s director, Will Powell, the new canine handlers and 10 ivory detection dogs will supplement anti-poaching efforts on the ground. They will be deployed to strategic airports, roads, and border crossings to stop the trafficking of illegal wildlife products through Botswana.

Previously, the country had lobbied with its neighbors to reintroduce limited ivory sales from countries with sustainably managed herds. After the spike in poaching and smuggling after a one-off sale in 2008, Botswana is now addressing illegal and unsustainable wildlife trade through innovative collaborations with other range states.

AWF’s Vice President of Species Conservation, Dr. Philip Muruthi, commended Botswana’s wildlife protection authority for developing the capacity of their rangers and law enforcement officers. He explained that this development is critical in sealing previously existing loopholes that were exploited by criminal networks to traffic ivory from poaching hotspots like Mozambique. 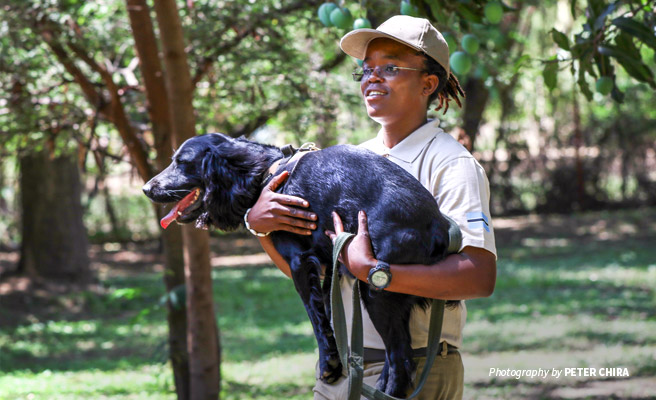 For Powell, who has trained robust handler-and-sniffer-dog teams that have intercepted millions of dollars’ worth of rhino horn, ivory, and pangolin scales, stopping the trafficking of wildlife products is not just a numbers game. The effectiveness of this conservation strategy depends on the bond between handler and sniffer dog.

Botswanan ranger and freshly qualified sniffer dog handler, Tebogo Mangombe, knows that anti-trafficking initiatives are needed urgently in her country. She reveals how the training has added an edge to her work as a custodian of Africa’s wildlife — and a special companion in her life.

Why is Canines for Conservation important to you?

We have a lot of wildlife and we must protect them for future generations. Saving wildlife means saving our lives too – our livelihoods depend on how we take care of our flora and fauna. The training on handling the detection dogs was enriching and I hope to apply the expertise gained after the course to fight poaching in my country more effectively.

How was it when you met your dog for the first time?

It was challenging because I did not know how to handle him initially but later I realized he could do a lot more. One of the best moments of training was after the first month when I was able to relate better with my dog. He is loving, energetic and happy. He is my best friend — I love him so much because I have a very special connection with him.

What is the best lesson you learned during training?

Just the overall experience of being a dog handler and using that skill to fight poaching is a big achievement for me. I was previously in the anti-poaching unit — now this canine unit is my life. I cannot imagine myself doing anything else at this point in time. We are going back home with the goal of ending this organized crime.

Guyo Adhi is AWF’s Social Media Officer. He is passionate about everything digital and social marketing. He loves to spread the message of conservation to audiences through digital platforms.