Why We Need Healthy Ecosystems 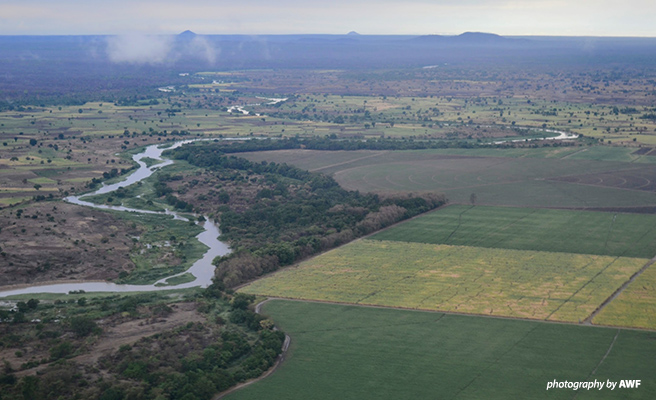 Habitat destruction is a particular threat for Africa’s forests. The words “deforestation” and “biodiversity loss” often appear in the same sentence, conjuring up images of felled logs and scorched earth where lush, green canopies have been sacrificed for palm oil plantations or oil drilling. The loss of these trees and other plants, of course, also means the loss of the animals who make forests their homes.

Great apes in particular face elevated risks from deforestation. Since 1900, great apes have lost more than 50 percent of their habitat globally, with deforestation rates accelerating significantly over the past 25 years.

The Congo Basin—Africa’s largest expanse of forest at 2 million sq. km, or four times the size of Spain—is home to four species of great ape: Western gorilla, Eastern gorilla, chimpanzee and bonobo. Here, up to 9 million cubic meters of timber are legally harvested annually. In some of the six countries with land in the rainforest, illegal timber harvesting is estimated to be higher than legal harvesting. Deforestation at the level of local communities also poses a threat.

With all four of Africa’s great ape species classified as endangered or critically endangered, all forms of deforestation and habitat destruction put these species in grave danger.

It’s important to point out, however, that animals aren’t the only ones who depend on their ecosystems for survival. People also require clean air, potable water, fertile soil and consistent climatic conditions—all things that ecosystems provide. With this week including both International Day of Forests on Mar. 21 and World Water Day on Mar. 22, it’s a good time to acknowledge the role that forests and water systems play in supporting all kinds of life on Earth. 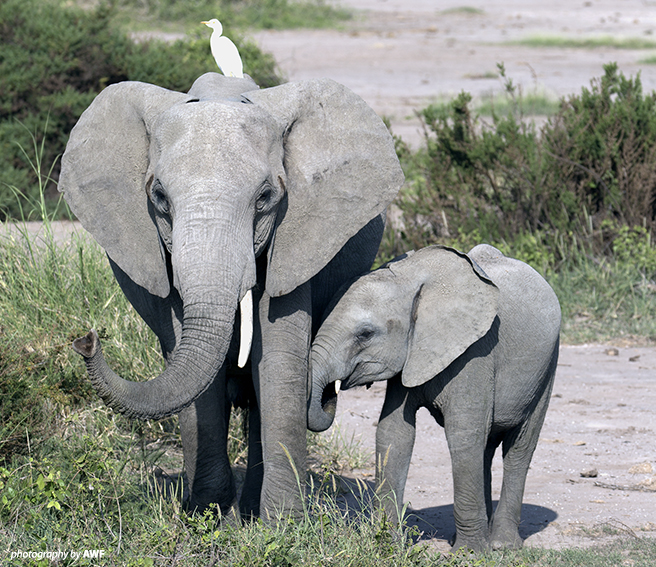 Rural communities typically find themselves on the front lines of ecosystem damage—and protection. Their activities can have direct, visible positive or negative impacts on their local ecosystems. The services that healthy wild lands provide, however, extend far and wide.

As the planet’s “lungs,” forests serve as carbon sinks, trapping carbon dioxide that would otherwise contribute to global warming and climate change. They also turn some of that carbon dioxide into oxygen, so we can breathe easy.

The Mau catchment also feeds more than a dozen rivers, which in turn drain into Lakes Victoria, Nakuru and Natron—ultimately supporting the energy, tourism, agricultural and other sectors in East Africa. Approximately 10 million people depend on the rivers drawing water from the forest complex.

In spite of its generous contributions to humans’ well-being, the Mau has lost significant portions of its tree cover to encroachment by local communities and industrial development alike. Like many rural people living on the outskirts of Africa’s forests, local communities depended heavily on the Mau. People needed firewood for cooking, land for livestock grazing and farming—and most importantly—water.

Appreciating what we’ve got before it’s gone

Too often, we fail to appreciate the importance of functional ecosystems until they become dysfunctional. This was all too true in the Enderit forest block, a section of the Mau that suffered from degradation as a result of pressures from charcoal burning, livestock overgrazing and unsustainable farming practices.

For years, the Mau forest has seen its edges recede, giving way to farms, livestock pasture and unsustainable logging and fuelwood collection. In the case of the Enderit forest block, an influx of manual laborers who worked on seasonal farms began felling trees and burning charcoal to supplement their income during the off seasons.

As more trees vanished, so did the health of the local soil and the reliability of the local water supply. Tree cover is a key factor in keeping ground temperatures low and soil moisture high enough to prevent rich earth from turning to barren dust. Protected from the sun’s heat, forest soils can trap and store water during wet seasons and release it during dry seasons, preventing both flash floods and droughts.

By exposing the soil to extreme heat in the dry season and nutrient runoff in heavy rains, a lack of tree cover also stunted the forest’s ability to regenerate itself. The soil lost some of its capacity to nourish young trees so they could grow. Livestock grazing also threatened smaller plants and trees as animals trampled them and sometimes pulled up their roots before they had the chance to mature.

Meanwhile, without adequate forest cover to regulate soil moisture and serve as a windbreak, heavy rains and winds meant soil erosion for farms and livestock pastures. This left farmers and herders no choice but to encroach further into the forest for land. Waning productivity for both groups and disruption of the ecosystem’s natural balance therefore reinforced each other in a vicious cycle.

During dry seasons, some rivers that previously flowed all year long no longer had any water to bring to their most downstream users. Clean water—needed for drinking, livestock, farming, cooking and cleaning—became scarcer in the area, giving rise to conflicts among communities.

To break the cycle, AWF worked with the Kenya Forest Service and other local partners to help communities change some of their practices—benefiting the ecosystem, and, ultimately, themselves. 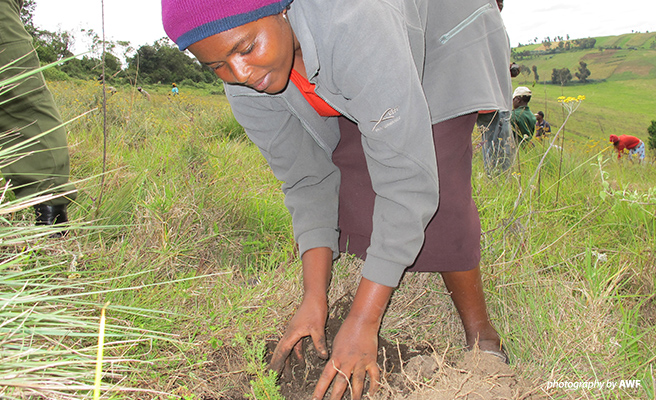 It was also necessary to improve declining water quality in the area and communities’ access to potable water. The Nderit River makes up part of the Mau Forest water catchment and flows into Lake Nakuru, a destination for tourists around the world who come to see its infamous flamingoes.

In 2014, the Nderit River suffered from high levels of turbidity (read: tiny particles of pollutants in the water that make it look cloudy to the naked eye). Fertilizers and silt were running off into the river from local farms.

With local partners, AWF provided training on sustainable farming practices in the riparian zone along part of the Nderit River. Farmers learned to avoid planting crops within 6 meters of the riverbanks and instead planted trees in those areas. The networks of tree roots along the river help prevent soil erosion and runoff from farms.

By 2016, the water’s turbidity had dropped significantly, thanks in no small part to AWF’s collaboration with farmers.

Elsewhere in the Mau landscape, AWF worked with communities to popularize the use of fuel-efficient cookstoves and biogas digesters, both of which limit the need to encroach on the forest for firewood. What is a biogas digester, you ask? Basically, this apparatus harvests methane from livestock waste. The gas burns cleanly and without odor, providing a sustainable alternative to charcoal for cooking.

For those who previously burned charcoal as a form of income generation, AWF provided training and start-up capital for micro-enterprises such as beekeeping. We also partnered with the local farmer’s cooperative to provide a milk processing plant for dairy farmers, and training in agricultural intensification and business management—allowing them to earn adequate incomes without encroaching on the forest.

Through these and other activities, local communities in the Mau and elsewhere are beginning to see the connection between their practices and the health of the ecosystem—and the services the ecosystem provides for them. 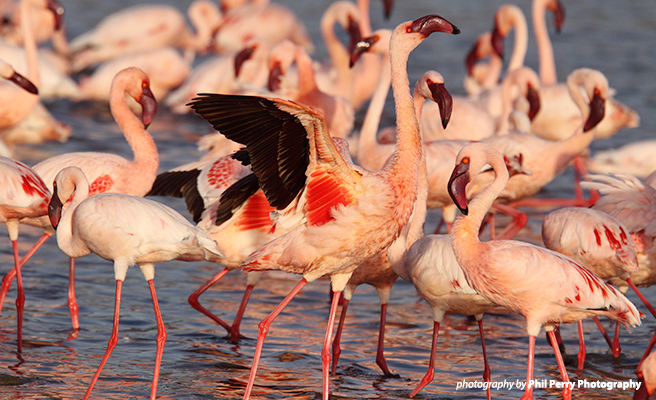 Happily, the importance of ecosystem services for human prosperity has gained some traction in recent years. In southern Tanzania, AWF is facilitating partnerships with companies and government agencies to develop models for conserving ecosystems that benefit communities while improving businesses’ bottom lines at the same time. Such partnerships represent a crucial tenet of the IUCN Sustainable Inclusion Strategy for Growth Corridors in Africa (or SUSTAIN) program, which AWF is implementing in the Southern Agricultural Growth Corridor of Tanzania (SAGCOT) with support from the Netherlands Development Organisation.

In November, for example, AWF signed an agreement with Kilombero Valley Teak Co. (KVTC) and the Belgian Technical Cooperation. As part of the agreement, KVTC will pay communities living upstream of its teak farms to restore their local ecosystem—which happens to be the watershed that supplies water for KVTC’s operations and to the surrounding area.

While contributing to the conservation of a vital watershed, KVTC is also looking out for its own future. Surrounding the company’s land are commercial rice farms and local communities—not to mention wildlife such as elephants. All draw from the same water resources as KVTC’s teak farms.

With such significant demands on local water resources, KVTC is proactively ensuring that all parties’ water needs will be met well into the future. KVTC serves as an example of a company that mitigates risks to its own operations by securing ecosystem services, which has the happy result of conserving key wildlife habitat as well.

Throughout Africa, ecosystems deliver the natural resources and critical services that people and wildlife need to survive, and that economies need to grow. As the continent pursues an agenda of long-term prosperity, AWF will continue to work for the conservation of Africa’s natural heritage—which provides priceless benefits to its people.