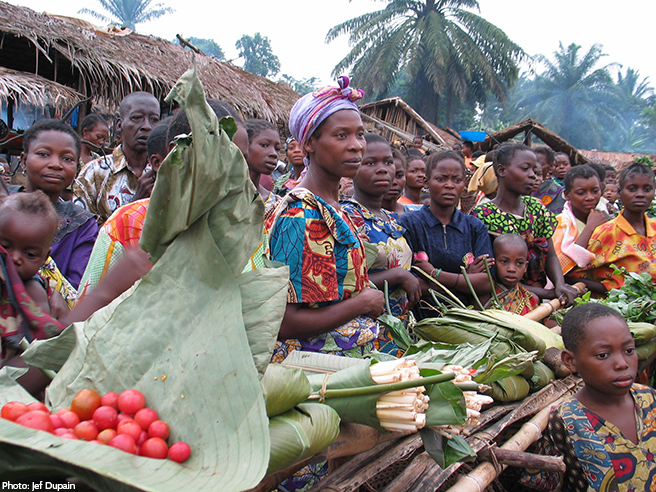 In some countries around the world, women are still not equal to men in law. Yet, within these same countries, the very building blocks of society are driven by the immense amount of work done by women.

Struggling families are ensured a minimum livelihood thanks to the gathering of firewood, the tending of fields, and the trading of bush-meat carried out by mothers, sisters, and daughters, young and old alike. If African communities are surviving the times, it is largely due to the ingenuity of women who are still fulfilling their traditional gender roles and more, while men are nowhere to be found.

Often described as a trap—it is a curbing, undesirable circumstance from which escape is difficult—poverty in sub-Saharan Africa is the main underlying threat to development. Take the Democratic Republic of Congo (DRC), which presents one of the most striking paradoxes of today. A whopping 80 percent of the DRC population lives on less than $1.25 per day (1,125 Congolese Francs), and the majority of pupils at the end of their Primary education actually do not have a basic knowledge of French or mathematics, partly because the average length of schooling in the country is 3.07 years. Yet the DRC features extraordinary and unique natural beauty; it is home to the Congo Basin—the second-largest tropical forest in the world—as well as the endangered bonobo, giant pangolin, forest elephant and other species!

Women in rural DRC do whatever possible to meet the needs of their family, sadly even if it’s illegal. Pauline Ekofi is a Congolese mother of five children, who left school at twelve years old. Pauline was a meat trader at the central market of Mbandaka, the province’s major town, up until September 2014 when, just as she was setting up her stall and balancing accounts with her fellow retailers, the police confiscated her significant purchase from an out-of-town weekly market specializing in forest products: 550,000 Congolese francs’ (US$580) worth of bush-meat. The seize was not only because endangered species were among her items, but also because of the Ebola outbreak notified to the World Health Organization in late August by the DRC Ministry of Health. It left her devastated—the income from her bush-meat trade was providing money for her children’s schooling and healthcare.

Around the same time as Pauline’s misfortune, African Wildlife Foundation (AWF) hosted a workshop in Mbandaka on the results of their survey monitoring the bush-meat trade in the Maringa Lopori Wamba landscape, managed under the USAID Central Africa Regional Program for the Environment. Pauline attended, and her outlook on livelihoods changed; on their own, participants put forward several recommendations to decrease communities’ overdependence on the forest.

AWF believes that protecting species and habitats, and increasing the percentage of protected areas are as important contributions to development work as economic prosperity and social wellbeing. The three are inextricable for sustainable development.

Development projects must be funded to high enough levels and for long enough periods to have an impact worthy of the name. Projects that implement alternative livelihood activities in the DRC achieve success through the help of various local, national and international organizations, and include activities like agriculture, fish-pig-poultry farming, livestock rearing of goats and cows, protein producing crops, microcredit, professional training in sewing and tailoring and even park employment. Despite researchers being critical of projects in the area for lacking monitoring and evaluation, they also recommend the same level of commitment in terms of funding and time, because behavior change is a process, not an overnight change of heart resulting from an eye-opening dream.

There is no question that women are on the frontline of positive transformation around the world. Today, instead of selling bush-meat at Mbandaka’s central market, Pauline now sells fish in the hope of taking part in an alternative livelihood project. Her income is lower, but her natural gift at selling is something she cannot overlook for her own empowerment. So, we can encourage discussion, or we can encourage discussion and also action. The science upon which we base our analyses of the human condition still shows that, if alternative incomes are low, local people are most likely to return to the forest to fulfill their basic needs. Thus, the number one threat to Pauline, Mbandaka, and the entire region—poverty—still lurks at her doorstep in spite of her goodwill. Is this the Africa we want?

The 25th African Union Summit is taking place this week in Johannesburg, South Africa, with the theme, "Year of Women’s Empowerment and Development Towards Africa’s Agenda 2063." Since the 1980’s, women's empowerment has been integrated in every aspect of African development strategies including but not limited to education, business and employment. However, conservation and environment management is the critical area that has not been given the necessary attention for women involvement.

The above blog post is one of a series that underscores the important role of women in conservation matters, and how women every day across Africa are already empowered to make decisions that have critical impact on their own future, the future of their families and the future of Africa’s natural resources.