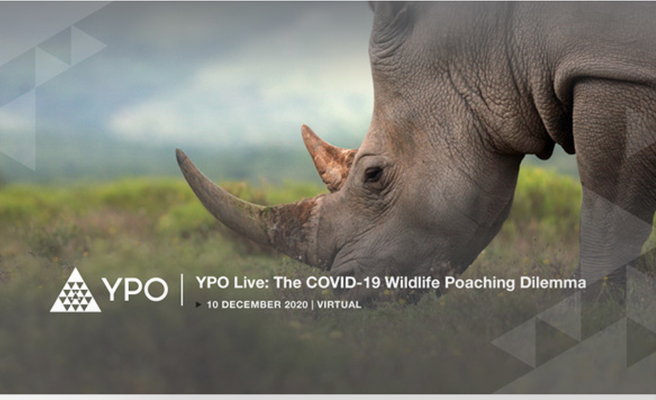 NAIROBI, KENYA AND WASHINGTON, D.C. (December 10, 2020) – African Wildlife Foundation today joined Young Presidents Organization (YPO) during a virtual meeting of CEOs from around the globe to brief their network of entrepreneurs and business leaders about the growing threat of illegal wildlife trade (IWT) in African landscapes, currently impacted by COVID-19 travel restrictions and government shutdowns.

AWF briefed YPO members on the poaching crisis and other issues emanating from the growing unhealthy interface between humans and wildlife.  Prior to the event, YPO members were shown the film “Sides of a Horn” by executive producer Sir Richard Branson, to gain a better understanding of illegal rhino poaching and the demand for animals overall.

AWF External Affairs Director Edwin Tambara explained what types of conservation programs are most effective to address poaching and illegal trade of wildlife products such as elephant ivory and pangolin scales: “We employ holistic strategies to curb the illegal wildlife trade out of Africa that work in multiple ways to stop the killing, stop the trafficking and, in the long run, to stop the demand. One effective deterrent is AWF Canines for Conservation, which trains sniffer dogs to interdict IWT traffickers at major hubs, such as airports and border crossings. As the dog teams experience an uptick in arrests of IWT traffickers, foreign authorities and governments, including the Chinese and others in Southeast Asia, have increased their cooperation in law enforcement efforts to break up trafficking syndicates. Unfortunately, COVID-19 has created a landscape in Africa where conservation enforcement is more difficult, which has resulted in an uptick of poaching in countries like Uganda.”

The YPO event was organized to tap into perspectives of its network of CEOs overseas and on the ground in Africa, along with outside experts, to examine just how poaching is expanding, shifting, and changing to adapt during the pandemic, to become a more serious problem. YPO is concerned that poaching, driven by demand for endangered animal parts, is tearing local communities apart and driving species to the verge of extinction.

Asked by a YPO member what his one wish would be if he had a magic wand to change the deteriorating reality of human interface with wildlife and nature at large, Tambara said: “Repositioning conservation as an economic growth opportunity for young Africans. My wish is grounded in our reality that, Africa the world's youngest continent. In less than a decade, Africa will have the largest labor force in the world.  This exploding youth sector must be much more focused on conservation, and so it must be positioned and incentivized so that personal connections are strengthened and behaviors modified over the horizon towards a green goal. Inevitably, African youth will need to prioritize the continent’s vast natural landscapes, capitalize on opportunities, and work harder at the local level to protect threatened and engendered wildlife.”

MEDIA CONTACT:  For more information and interviews about AWF counter-IWT programs and the spread of poaching during COVID-19, contact Patrick Mitchell of AWF in Washington, D.C. at PMitchell@awf.org or (202) 991-7508 or Nashipae Orumoy of AWF in Nairobi, Kenya at NOrumoy@awf.org or +254 701864021.