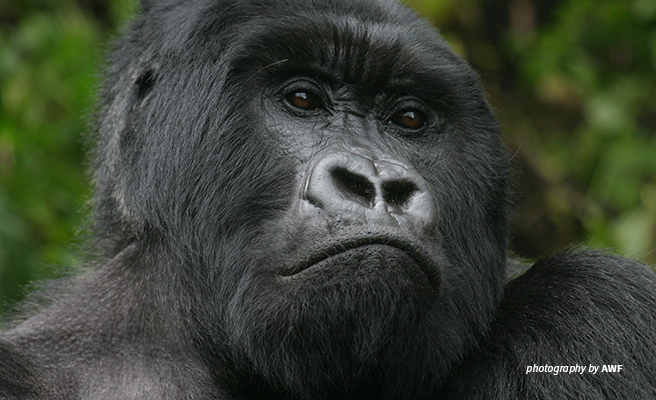 NAIROBI, KENYA and WASHINGTON, D.C. (September 24, 2020) – The African Wildlife Foundation (AWF) is taking time out on World Gorilla Day to remember the slain beloved silverback in Uganda, who tragically fell victim to human-wildlife conflict in Uganda over the summer. AWF announced the release of a new documentary film, “Rafiki” – honoring the famed leader of the Nkuringo gorilla group in Bwindi Impenetrable Forest.

AWF is marking World Gorilla Day with the launch of its film and using the opportunity to refocus attention on both the plight of gorillas in the wild, and the organization’s work with mountain gorillas, which has been restructured in recent months to help address the growing economic challenges impacting many conservation communities in wild landscapes wildlife — in particular communities that have been effectively cut off from tourist dollars by sweeping government lockdowns in many countries where AWF works on the ground.

Speaking during the webinar, AWF Senior Vice President Craig Sholley said: “It’s difficult to talk about wildlife conservation to a starving family. That’s why AWF is working in a purposeful way right now to ensure that the economic challenges stemming from lost revenue streams during the pandemic don’t result in more increased human-wildlife conflict. AWF works on the ground to ensure that wild lands thrive in modern Africa. We want to erase poaching from mountain gorilla habitats. To achieve our goal and to prevent another incident like the one that took Rafiki from us in Uganda, we must build an Africa where nature exists in harmony with sustainable development.”

Rafiki was killed on or around May 30, 2020, during an incident where he surprised poachers in Bwindi Impenetrable National Park in south-western Uganda in the Kanungu District. His body was discovered by park rangers on June 2.  Investigations showed that he was killed by a sharp object that penetrated his internal organs. This majestic silverback was believed to be around 25 years old when he died. His loss was felt by both the neighboring community and the group of 17 mountain gorillas that he led.

AWF’s Uganda Country Director Sudi Bamulesewa — who is also featured in the film — said: “World Gorilla Day has always been a celebratory occasion, but this year, the tragic cloud of Rafiki’s death lingers over the gorilla conservation society. As we all know, communities will not understand wildlife conservation if they do not see its benefits. That is why AWF’s critical partnership with Uganda Wildlife Authority has been very intentional. Now more than ever, we are committed to ensure we protect the remaining gorilla species – because we owe it to our dear friend, Rafiki.”

In his condemnation of the tragic death, AWF Senior Vice President Craig Sholley added that: “Rafiki was the epitome of a ‘gentle giant’ and this senseless act will reverberate across conservation networks and protected areas. During the COVID -19 pandemic, the loss of gorilla tourism revenue and the daily protection that goes with it has created challenges for wildlife authorities and the communities who regularly benefit from gorilla tourism revenue.  Conservation in Uganda and throughout Africa is facing unprecedented challenges as impoverished families are struggling with food security and more so during this pandemic. As the pandemic continues, I am frightened that we will see more incidents like this one - incidents that target Africa's most iconic species.”

The documentary film “Rafiki” released by AWF today is available for viewing at: http://awf.org/watch-rafiki

Craig's experiences with wildlife and conservation began in 1973 as a Peace Corps volunteer in Zaire. As an L.S.B. Leakey grant researcher in the late 1970s, Craig studied mountain gorillas with Dian Fossey and, in 1987, became director of Rwanda's Mountain Gorilla Project, of which African Wildlife Foundation was a sponsor. Craig has acted as Scientific Advisor for the award-winning IMAX film, "Mountain Gorilla," and with National Geographic, he surveyed the conservation status of mountain gorillas in the aftermath of Rwanda's civil war. Craig’s direct involvement with AWF began as a Senior Associate and member of AWF’s Board of Trustees. He became a full-time employee of AWF in 2001 and now serves as Senior Vice President.

The African Wildlife Foundation is the primary advocate for the protection of wildlife and wild lands as an essential part of a modern and prosperous Africa. Founded in 1961 to focus on Africa’s conservation needs, we articulate a uniquely African vision, bridge science and public policy, and demonstrate the benefits of conservation to ensure the survival of the continent’s wildlife and wild lands. Editor’s Note:  Photographs of Rafiki are available upon request.  AWF Vice President Craig Sholley is available for telephone interview by request.

MEDIA CONTACT: For interviews about the Rafiki documentary and in connection with World Gorilla Day, contact Patrick Mitchell of AWF at PMitchell@awf.org or (202) 991-7508 or or Nashipae Orumoy of AWF in Nairobi, Kenya at NOrumoy@awf.org , +254 701 864021.