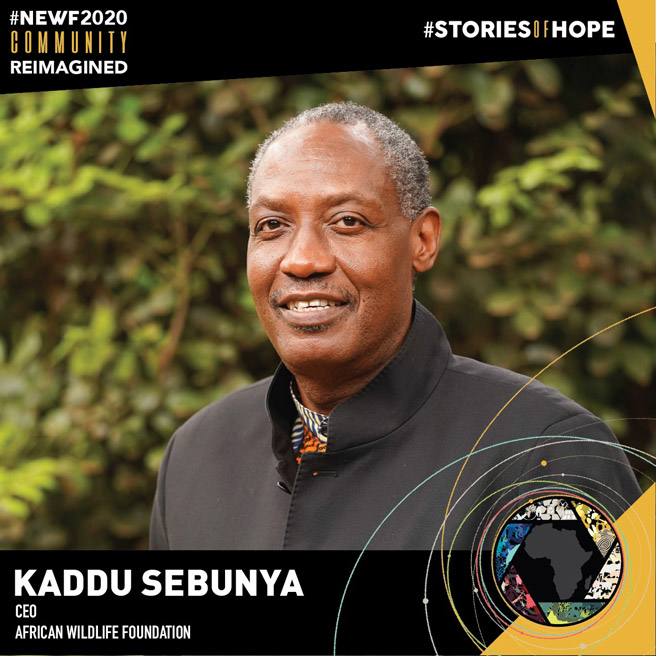 NAIROBI, KENYA (October 25, 2020) – African Wildlife Foundation (AWF) yesterday participated in the fourth edition of the Nature Environment and Wildlife Filmmakers (NEWF) Congress themed 'Stories of Hope – inspiring a call to action.' Established in 2017 as a response to Black African documentary filmmakers in the nature, wildlife, and conservation space being rarer than some of the endangered species on our continent, one of the congress’ key objectives is the transformation of nature, environment and wildlife, film and television industry, uncovering and supporting Africa’s next generation of storytellers, impacting conservation.

The Congress is usually held in Durban, South Africa, but due to COVID-19 the organizers were forced to re-imagine the setup of the congress, whilst trying to maintain the impact and sense of community amongst Africa’s next generation of storytellers. In response, they decided to host NEWF Congress 2020 in a virtual venue, created in a VR headset and on computer desktops, coming together as a community re-imagined to celebrate “stories of hope” that inspire a call to action.

Delivering the State of the Continent address last night at the opening ceremony, AWF CEO Kaddu Sebunya urged the filmmakers to reimagine their storytelling skills through shifting the narrative of African conservation. “For so long, the conservation story has been told, but not within an African perspective. But even then, mostly through the lens of science and animals. With less of the African people, cultures, heritage, use, knowledge, aspirations – all as part of conservation. And this is a role we need to reclaim. You, my friends, wield the power to shift the narrative for ensuring wildlife thrives in modern Africa. Through your cameras, lenses, and GoPros, you set the agenda. If Africans begin to see more content on nature and wildlife, the conversation will definitely begin to change immensely. Especially if they see Africans telling Africans why conservation is important,” Sebunya said.

“The world consumes so much of Africa’s nature and wildlife, yet for so long, the nature and wildlife filmmaking genre has literally been an extractive industry with the majority of Africans unable to see the content that is produced on this continent,” says Noel Kok, Founder and Programme Director of NEWF. “We cannot save what we cannot see, and therefore it is critically important that catalytic partnerships like these create additional platforms for the next generation of African nature, environment, and wildlife storytellers to impact conservation through their films.”

The week-long congress will bring together nature, environment, and wildlife filmmakers, scientists, conservationists, and broadcast media to connect in a series of seminars and discussions and networking sessions as well as to enjoy the screening of topical and relevant films from African filmmakers.

AWF’s participation at the congress this year aims to set the stage for a longer sustainable partnership to cultivate our vision of nurturing the youthful talent into conservation leaders of tomorrow.

The African Wildlife Foundation is the primary advocate for the protection of wildlife and wildlands as an essential part of a modern and prosperous Africa. Founded in 1961 to focus on Africa’s conservation needs, we articulate a uniquely African vision, bridge science and public policy, and demonstrate the benefits of conservation to ensure the survival of the continent’s wildlife and wildlands.