Changing the face of African conservation in US environmental policies

Changing the face of African conservation in US environmental policies

When the demand for elephant ivory and rhino horn escalated in the early 2010s, African Wildlife Foundation quickly pivoted its existing anti-poaching programs to stop threatened populations from being decimated. Apart from boosting security in protected areas, the urgent response improved wildlife law enforcement and blocked the transit of illegal wildlife products with the deployment of canine detection units at notorious trafficking hubs in Eastern and Central Africa. Outside of the continent, AWF worked with partners in demand countries to educate consumers about the cruelty of the wildlife criminal industry while supporting legislation to ban the sale of critically endangered and vulnerable species and their products.

Though elephant and rhino killings have slowed down in the last few years, AWF’s anti-poaching and anti-trafficking programs continue. In the U.S., we supported the bipartisan Eliminate, Neutralize, and Disrupt (END) Wildlife Trafficking Act passed in 2016. The legislation provided much-needed backing to protect wildlife from illegal trade, improving law enforcement, governance, and community-based conservation in Africa and other parts of the world — including our Canines for Conservation program which has deployed sniffer dogs and handlers across Africa.

With provisions of the END Wildlife Trafficking Act of 2016 set to expire in October 2021, U.S. Senators Chris Coons (DE) and Rob Portman (OH) are leading bipartisan efforts aiming to continue the whole-of-government approach to ending global wildlife poaching and trafficking by reauthorizing the activities of the Presidential Task Force on Wildlife Trafficking. It is imperative to protect and build on the gains achieved so far in combating wildlife trafficking in Africa. AWF supports their efforts by providing insights from our programs, identifying areas for improvement, and considering emerging issues in combating wildlife trafficking, including cybercrime and public health.

Why is the African perspective important in U.S. policy?

“This is the basis of everything that we do,” says Tambara. He joined AWF in 2013, passing up a scholarship for doctorate studies so that he could instead attend AWF’s rigorous, two-year Conservation & Leadership Management Program in Nairobi. Having earned bachelor’s and master’s degrees in ecology and conservation at the University of Zimbabwe, Tambara proved his chops by focusing on the often-ignored small taxa of wildlife. “For a couple of years, I would be known as the Butterfly Man in the mid-Zambezi Valley,” he laughs, “as my research focused on using butterfly species as indicators of ecological disturbance along a gradient of agricultural expansion.” He also initiated projects on amphibian conservation in the Eastern Highlands of Zimbabwe, rediscovering frog species that had not been seen in over four decades.

Tambara traces his love of nature to his childhood in Zimbabwe, where he helped herd his father’s cattle. He and his friends in Domboshava spent their days in the hills, swimming in the rivers, enjoying forest fruits, and observing the wildlife all around them. “Nature provided much of the basic necessities we needed including clean water, wood fuel, medicinal plants,” Tambara recollects.

But those joys would not last forever. When Edwin returned home from boarding school, he found that people relocating from the nearby city of Harare had transformed his village. Cutting trees and clearing vegetation for sprawling new settlements was commonplace. “We received a lot of people who really didn’t have a good connection with and respect for the environment,” Tambara says. Today, little is left of those childhood treasures. 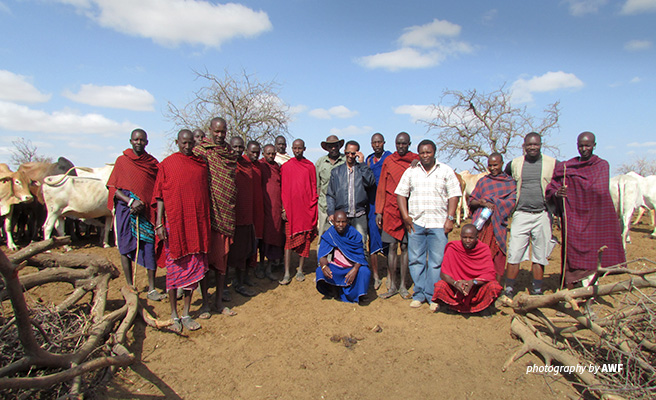 “Adventure has always been a part of me,” says Tambara. At 28, he moved to Kenya and quickly found himself at the front lines of conservation as one of AWF’s Conservation Management Associates. Following the program, he joined the staff as a Conservation Planner, helping shape land-use, tourism, and business plans for protected areas and critical biodiversity hotspots across the continent. He was put in charge of developing the first management plan for any national park in South Sudan. He also helped develop management plans for Hwange National Park in Zimbabwe and tourism plans for Campo Ma’an and Mt. Cameroon parks.

After two years in conservation planning, he ventured into a new role setting up and driving processes to determine the strategic direction for the breadth of AWF’s programs. As Manager for Strategy and Impact, Tambara pushed for high-impact and high-quality conservation projects, working with landscape and country teams in Southern, Eastern, Central and West Africa. Not afraid of asking hard questions, Tambara’s tenacity set the foundation for context-specific strategies that also aligned with the organization’s vision and goals on the global front.

In his various capacities at AWF, Edwin found communities and other stakeholders tended to be skeptical of an outsider. He learned that building relationships with patience allowed people to trust the process. “Sharing my personal story and where I come from and what has happened there helped me to connect with partners across Africa,” he says, adding that people were reassured once they experienced AWF’s approach, which was always empowering and promoted participation. Now, more than seven years later, he leans on these essential lessons to engage audiences in the Americas.

Based in the U.S., as Director, External Affairs, Tambara is making inroads in changing the narrative of African conservation in U.S. policy circles. Whether he is working with legislators, development leaders, conservation partners, private sector players, or the general public, he wants to help elevate the African conservation agenda in international discussions and decisions. “I want to help policymakers understand the difficult realities that Africa faces around conservation and development,” he explains.

“Our unique position and point of pride is that we are African, but we are global,” Tambara says. “We know the reality of what it takes to do conservation in Africa, the reality of who stands to lose when certain [U.S.] policies and measures are passed.” Additionally, AWF knows what it will take to implement these measures on the ground. U.S. support is critical in ensuring Africa sustainably conserves its wild lands and wildlife while optimizing economic growth. “My goal is to ensure the U.S. and other multilateral institutions are not prescriptive in their approaches and policy positions but consider Africa’s perspectives,” says Tambara.

He points to AWF’s long-standing partnerships with African governments, conservation partners, and communities as key in his engagements with U.S. audiences. Sharing stories, challenges, success, and insights from the ground with policymakers on the Hill ensures African voices and perspectives are heard. “Learning fast and building relationships are the chief currencies for engaging and influencing for better policy outcomes,” Tambara reveals. He uses every opportunity to connect and work closely with U.S. legislators keen on international conservation and those who believe in espousing sustainable use of natural resources across the continent.

Apart from having first-hand experience working in different countries in Africa, AWF has also fostered partnerships with other conservation players on the continent. AWF recently formed the first-ever continent-wide coalition of national and grassroots civil society organizations working on Africa’s conservation issues. “The coalition has broadened our appreciation of what’s happening across the continent. It has given us access to conservation practitioners working closely and attuned to the needs, challenges, and aspirations of indigenous peoples and local communities living with wildlife,” says Tambara. “For me, this coalition has been a great sounding board for insights and feedback to inform emerging U.S. policies that affect African conservation.”

In November 2020, a panel of conservation and legal experts — including AWF’s wildlife law enforcement lead — shared their insights at a special briefing organized by the International Conservation Caucus Foundation and the U.S. Senate Conservation Caucus. “Support for the END Wildlife Trafficking Reauthorization and Improvement Act of 2020 is imperative to securing gains achieved so far in combating wildlife trafficking across the world,” explains Tambara. 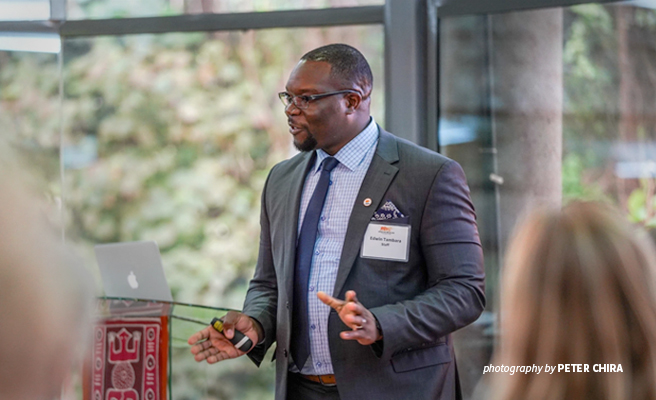 For years, Tambara says, there has been disenfranchisement, which has led many Africans to view and know conservation as a cause for people from the West. “Africans, particularly the young, are realizing that conservation is and has been part of our lives, traditions, and beliefs. I wholeheartedly believe our challenge and success with conservation rest in making it part of young Africans’ economic aspirations,” he says.

As the largest demographic on the continent, the youth’s priorities and behaviors are beginning to shape the way Africa develops. At about 600 million, in just over 5000 days, Africa is set to have the largest labor force globally and a population of over 1.8 billion to feed. The figures triggered a greater sense of urgency for Tambara to realize his vision than when he started his conservation career.

The highest priority for youth in a rapidly changing Africa is employment, securing a source of income, and making a meaningful contribution to the continent’s development. Investment in the conservation sector can address these aspirations — a view Tambara has embodied since days as a student conservation scientist overcoming the barriers that many of peers continue to face.

In 2018, he pursued a Conservation MBA with the African Leadership University in Kigali, Rwanda, inspired by his belief that conservation is a critical growth sector for the continent. The first of its kind in the world, the course is upskilling homegrown African leaders to pioneer innovative approaches in the business of conservation. “The knowledge and skills acquired from this program are helping me to influence policies that position the conservation as a viable economic and development avenue for African youth,” he says.

Tambara looks back at his early days. “It fascinates me how a few years ago, I was in a small corner of Zimbabwe looking for frogs and chasing butterflies, but today I contribute to and influence policies that have implications for conservation and development in Africa.” Humbled by his trajectory in the last seven years at AWF, he says, “I am incredibly privileged to be where I am and to have worked in some of Africa’s unique and iconic landscapes. My story is not commonplace, and this is what makes AWF unique in promoting emerging African leaders.”