One fine morning in 2019, Chenjerai Chimukoro woke up to a herd of nearly 70 elephants in his farm working their way through his sorghum, cotton, and maize plants. He knew that he had to act fast to save what was left of the crop and ensure that his family would have something to eat come harvest time. Luckily, he was prepared.

He quickly fetched chili pepper blocks from his house and burned them on a charcoal brazier until they produced pungent smoke. The acrid fumes irritated the elephants without harming them and they soon gave up on Chimukoro’s farm and moved on. The farmer sighed with relief and made his way back to his house. He would live to fight another day.

“I volunteered to become a chili farmer last year both as a way to repel elephants and to earn extra income. I planted chilis at the periphery of my farm where the elephant paths are and I have found that since then, elephants have only attempted to enter my farm four times in the past one year. Even on those occasions, they only ventured in a few meters before they were overcome by the smell of chilis and left. So I did not suffer the kind of losses that I have suffered in the past,” he says.

Elephants have taken on an iconic status in conservation. A thriving elephant population is seen as indicative of a healthy natural ecosystem. Scientists consider them a keystone wildlife species and tourists do not count a safari trip complete until they see vast herds of elephants.

However, these beloved pachyderms have become a menace in many parts of rural Africa. In Mbire district, northern Zimbabwe where Chimukoro lives with his four wives and 25 children, government officials say that violent interactions between elephants and humans happen almost daily. Encounters range in severity from crop raids to injuries and deaths, with casualties reported on both sides. Zimbabwe’s National Parks and Wildlife Management Authority reports that 20 people had been killed by elephants between January and October of 2019. Often, in turn, community members retaliate by trapping and killing the animals. It is a no-win situation.

According to Chimukoro, who is also an elected political representative in Mbire, the community’s perspective of wildlife has been double-sided. People have realized the economic benefits of wildlife through wildlife tourism. The community has used these funds to build schools and health care facilities. However, they have also seen wild animals destroy crops and kill or injure people. This has built resentment and stoked feelings of ill will toward wildlife.

“One of the biggest challenges exacerbating human-wildlife conflict in this area is the settlement pattern. People are scattered all over with no thought to wildlife areas. So even when we try to deal with the elephants and successfully repel them from one place, they go on to affect the next household. As council members, we are trying to fix this by organizing settlement areas to ensure that wildlife corridors are opened up to prevent wildlife from straying into farms,” says Chimukoro. 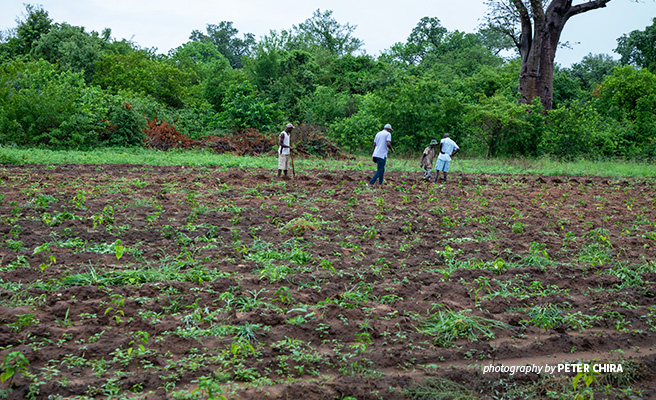 As Nero Mtupaunga, a 48-year-old farmer who also lives in Mbire district has learned, elephants can decimate a whole season’s worth of crops in a single night.

“I have woken up to half of my crops gone after a night of elephants rampaging among the sorghum, cotton, and groundnuts,” he says. “Couple that with other challenges including water shortages and pests and it means that there are times I only manage to harvest a quarter of what I planted, which is barely enough to feed my family, let alone sell for profit.”

Elephants are on the move between dusk and dawn when the farmers have already retired to their houses for the night. The presence of human beings is usually enough to ward off elephants but in a place as wildlife-rich as Mbire, it is safer for darkness to find you indoors to avoid encountering elephants and other wild animals when they come out to eat at night. Mtupaunga is now growing chili in the hope that it will stand guard over his farm during the night when he cannot.

“We have been using guns to shoot in the air to scare elephants off, but we are now learning that chili might be a better alternative in terms of efficiency and safety,” he says. 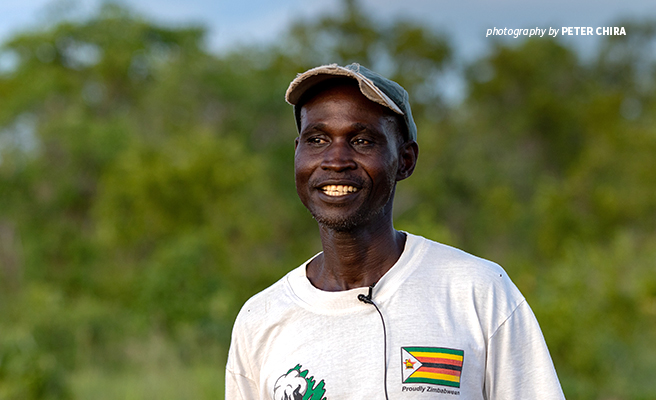 This innovative use of chili plants and peppers, a non-lethal method of repelling elephants, not only reduces human-wildlife conflict, but it also creates goodwill for conservation efforts in the region. African Wildlife Foundation, with the support of the European Union, has so far supported 48 chili growers in Mbire district, helping them to access seedlings, farm inputs, and markets for their crops. Buoyed by their neighbors’ success during the pilot phase of the program, other farmers in the area have invested their own resources into chili growing in the hope that it will serve as a new source of income and keep elephants at bay.

Collen Matema is AWF’s Community-based Natural Resources Management Officer in Mbire and has lived in the area for over 15 years. He knows that the biggest challenge in implementing conservation activities in the district has been demonstrating to the community that peaceful co-existence between wildlife and people is possible if they put in place a few effective measures.

“This is an area with high levels of poverty and high levels of human-wildlife conflict which means that the efforts that the people put into productivity are half the time destroyed by wild animals. So, for us to come in and promote wildlife conservation can be a big challenge, unless we prove that the interventions that we preach can yield results,” he says.

AWF interventions in the area have so far been geared toward training community scouts to respond to human-wildlife conflict incidents and to train farmers to grow and use chili as a mechanism to deter herds from crossing into plantations and minimize losses by crop-eating elephants.

“Both these efforts are working well so far. The use of chili especially has proven to be sustainable, cost-effective, and easily adopted by households. Other than chili blocks, farmers can also dip string in a mixture of oil and chili powder and use it to fence off their farms. Testimonials from farmers show that this has also been quite successful in driving elephants away,” says Matema.

He hopes that a marked reduction in human-wildlife conflict will see the local community embrace wildlife and conservation as a legitimate form of land use.