As African heads of state prepare to join Chinese President Xi Jinping in South Africa for the 6th Ministerial Conference of the Forum on China–Africa Cooperation, a group of respected Chinese and African business and policy leaders is appealing for wildlife and environmental issues to be included on the diplomatic agenda of the upcoming summit.

“Both African governments and the Chinese government want better lives for their people and believe strong trade, not aid, is the way to achieve this,” said Philip Idro, former Ugandan Ambassador to China. “At the same time, we must remember that economic growth relies on healthy, resilient ecosystems and wildlife. For many African countries, wildlife and wildlands conservation can help to alleviate poverty and provide economic benefits. The Chinese have made great strides in panda conservation and in protecting their forests. I am sure we can come together to find acceptable ways of solving this dilemma in Africa.”

The group is participating in a China–Africa Dialogue Series facilitated by the African Wildlife Foundation (AWF) and the Aspen Institute. The effort aims to move leaders in government, civil society and private industry toward actively promoting investments and operations in Africa that are sustainable and include protection of Africa’s wildlife and wild lands.

The Dialogue Series first brought together African thought leaders in Nairobi and Kigali in 2014 to address Africa’s natural resource crisis in the wake of rapid economic development. A parallel group of Chinese private and public sector leaders was convened in Beijing and Tianjin in 2014, followed by an official dialogue in Beijing in 2015, to help establish a set of recommendations for African–Chinese cooperation around challenges of wildlife and wild lands protection.

Key outcomes of the Dialogue Series have included:

“The Dialogue participants have worked hard to ensure Africa’s wildlife and wild lands are not left behind as the continent acts on its development agenda,” said African Wildlife Foundation CEO, Dr. Patrick Bergin. “Because the role that China plays in that agenda is significant and by all accounts game-changing, it has a responsibility as well as an opportunity to help ensure Africa’s elephants, rhinos and other wildlife have a future in the modern Africa rising up before us.”

The format of the Dialogue Series followed the Aspen method of moderating dialogue in a small group setting where participants from various backgrounds and perspectives learn from each other through an interactive discussion of specific readings.

As a closing stage of the China-Africa Dialogue Series, the Aspen Institute and AWF will host a final roundtable dialogue and safari from November 30 to December 3 at Kruger National Park, which has become a hotspot for rhino and elephant poaching. In addition to public and private sector leaders from China and Africa, participants will include African wildlife experts and VIP cultural envoys. A press conference will be organized on December 3 in Johannesburg to share the group’s experience and findings. 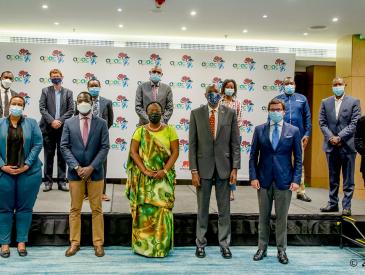