Club of Rome Youth Summit on ‘Our Joint Future’ Kicks Off 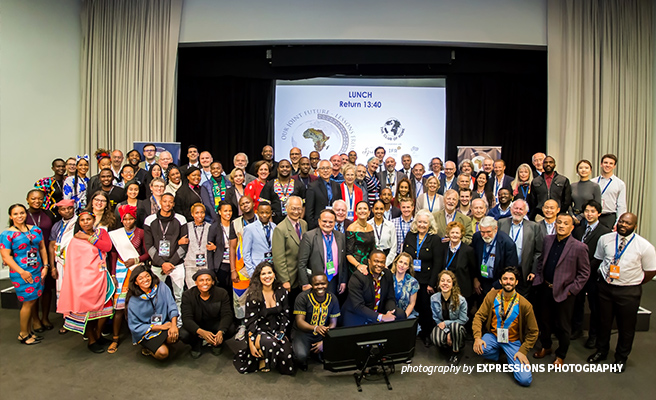 Young people from all over Africa gathered in Cape Town on November 5, 2019 to participate in discussions that will shape the continent’s economic, development, and political future.

The conference, dubbed 'Our Joint Future - Lessons From Africa,' is a one-of-a-kind youth summit running in parallel to the Club of Rome's Annual Summit. Organized in collaboration with the African Wildlife Foundation (AWF) and other stakeholders, the Youth Summit brings together members of the Club of Rome, young leaders, policymakers, and corporations to bridge the gap between the two generations when it comes to addressing urgent issues in Africa and beyond.

“What is becoming clear to everybody is that young people can no longer be sidelined if Africa is to move forward in its conservation and development agenda. Young people have proved to be more conscious of their effect on the natural environment,” said AWF CEO Kaddu Sebunya, who is also a panelist at the two-day summit.

Africa as a continent is young, and its vibrant young leaders have proven to step up and create opportunities that will enable their voices to be heard amid the ongoing political and economic noise. The Club of Rome, working closely with AWF, recognizes the need to have the youth at the table to discuss their future as they are the ones who will be impacted directly by the decisions made today.

“Here in South Africa, we have an opportunity to shape a bold agenda and to encourage global public discourse on issues of profound importance to ourselves, our future, and our humanity,” said Dr. Mamphela Ramphele, Co-President of the Club of Rome.

The summit understands that in a society in which younger generations are increasingly mobilized and engaged, young leaders are pushing for the same systems shifts as members of the Club of Rome.

In the past, the Club of Rome has been known to sound the alarm on advancing conceptual frameworks and implementing key actions to ensure we can emerge from the many crises confronting humanity and the planet. However, as the international think-tank transitions to a new vision, mission, and strategy, the members agreed that it is critical to start intergenerational dialogues on its four guiding pillars: Climate Emergency, Reframing and Reclaiming Economics, Rethinking Finance, and Emerging New Civilization(s).

“Youth have been convened in several forums over the years. It is vital to note that as great as it is to have both generations in the same room discussing these issues, we need to act and act now," emphasized Hilma Angula, Namibia Youth Representative. She added, "I am hopeful that this conference will put much-needed pressure on our governments to do something immediately."

The young leaders converging at the Youth Summit come from across the globe – with a particular focus on African youth – to deliberate on systemic challenges and explore near- and long-term solutions.