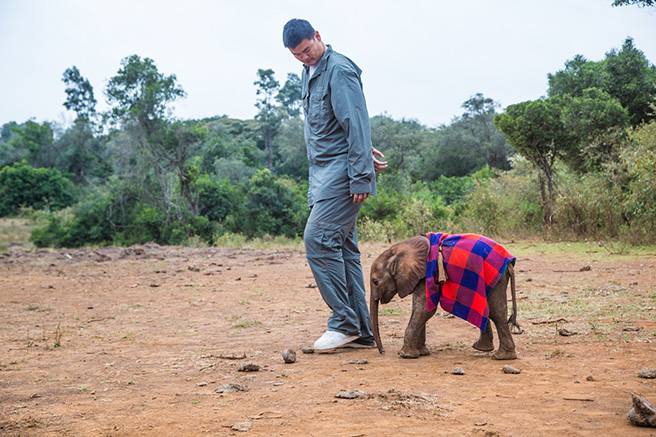 China’s rapid economic development continues to create a burgeoning middle class that can afford endangered wildlife products such as ivory. The current demand for ivory claims the lives of as many as 25,000 African elephants annually.

"To protect these endangered animals, we must reduce the market demand," said Yao Ming. “When people in China know what’s happening with the illegal ivory trade, they will say no to these products.”

The conservation groups also introduced a "Do not buy ivory" web page where the public can upload photos, pledge not to buy ivory, and show their support for wildlife conservation.

“Africa’s elephants can no longer support the world’s addiction to ivory,” said African Wildlife Foundation CEO Patrick Bergin. “As the number one market for ivory in the world, China has a critical role to play in helping reduce demand for ivory. Owning ivory is simply not worth the bloody cost to elephants.”

“China holds the future of Africa’s elephants in her hands. With Chinese leadership, elephants have a chance of a harmonious future with the modern world. But if the buying continues, the outlook for this magnificent species is bleak,” said Iain Douglas-Hamilton, CEO of Save the Elephants.

Founded in 1961, the African Wildlife Foundation (AWF) is a leading conservation organization focused solely on the African continent. AWF’s programs and conservation strategies are based on sound science and designed to protect both the wild lands and wildlife of Africa and ensure a more sustainable future for Africa’s people. Since its inception, AWF has protected endangered species and land, promoted conservation enterprises that benefit local African communities, and trained hundreds of African nationals in conservation—all to ensure the survival of Africa’s unparalleled wildlife heritage. AWF is a nonprofit organization headquartered in Kenya and registered as a 501(c)(3) in the United States. For more information, visit www.awf.org, follow us on Twitter @AWF_Official and find us on Facebook at facebook.com/AfricanWildlifeFoundation.

WildAid is the only organization to solely focus on reducing the demand for wildlife products. Working with hundreds of Asian and Western celebrities and business leaders, including Jackie Chan, Leonardo DiCaprio, and Sir Richard Branson. WildAid’s public service messages and educational initiatives reach hundreds of millions of people a week in China alone through donated media space. For more information: www.wildaid.org.

About Save the Elephants

Save the Elephants (STE) aims to secure a future for elephants in a rapidly changing world. Pioneers in cutting-edge science, their research provides vital insights into elephant behavior, intelligence, and long-distance movement. Given the current crisis, STE has now marshalled its resources to combat elephant poaching, prevent ivory trafficking at all levels, and bring to the attention of ivory consumers the catastrophic impact of their purchases. For more information: www.savetheelephants.org.