Philip, who has worked with African Wildlife Foundation for more than 20 years, faces conservation challenges from a broad perspective. His role is to deliver strong and appropriate conservation science inputs to AWF's integrated conservation strategies that take into account landscape-level approaches, social issues, and economic issues. He is responsible for issues as varied as the kind of endangerment classification a species should receive, or how resources should be allocated and oversees AWF's species program. In addition, Philip represents AWF in the international conservation dialogue, such as at the Convention on International Trade in Endangered Species (CITES) and the International Union for Conservation of Nature (IUCN) World Conservation Congress. He is also a member of the Task Force on Kenya’s Migratory Corridors and Dispersal Areas as well as Kenya's National Giraffe Conservation Task Force. Philip’s educational qualifications are extensive, including both an M.S. and Ph.D. in ecology and evolutionary biology from Princeton University, and numerous publications. 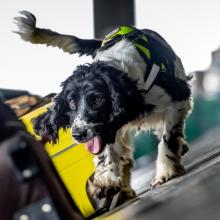 Sponsor a Sniffer Dog to Save Elephants

Your monthly gift of $25+ sniffs out wildlife crime