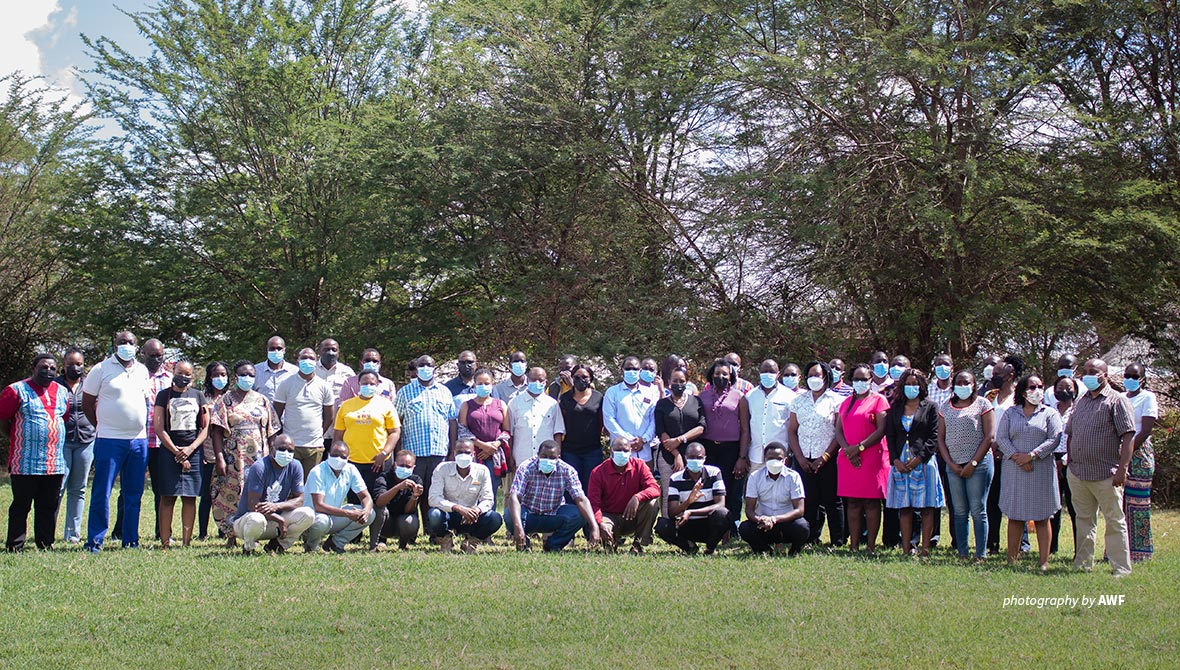 As part of the organization’s court monitoring program in the Tsavo landscape, African Wildlife Foundation (AWF) facilitated a meeting between the Kenya Magistrates and Judges Association (KMJA) and the Kenya Wildlife Service (KWS) on November 27, 2021. Forty-four judicial officers joined KWS prosecution and investigation experts at the day-long discussions held at Voi Wildlife Lodge, adjacent to the Tsavo East National Park.

With magistrates and judges representing courts from in Kenya’s lower eastern region, the session aimed to sensitize the senior judicial officers on wildlife conservation challenges and underscore the importance of delivering informed judgements on wildlife crime. AWF’s senior ecologist in Tsavo, Kenneth Kimitei, welcomed KMJA members to the landscape, providing a background on prevalent threats facing wildlife conservation in Tsavo, including illegal wildlife killing and trafficking, bushmeat trade, illegal grazing, and land conversion, among others. He emphasized the far-reaching ecological impact of species loss and habitat degradation, noting that the valuable ecosystem services provided by a tree far surpasses the commercial price of the charcoal it may produce.

Outgoing KMJA Chair Justice Oscar Angote appreciated the learning opportunities presented by workshops with KWS, allowing magistrates and judges to address emerging issues in wildlife crime thanks to exposure from conservation practitioners. He acknowledged the role of partner organizations such as AWF in facilitating sessions with with the wildlife management authority to share experiences and build capacity of judicial officers. Referring to a previous KMJA-KWS workshop at Kapiti Plains, he added, “The few trainings I have attended have been very enriching in terms of [understanding] wildlife prosecution and investigations. Additionally, when the prosecutors present their cases to us, they are able to know what is expected of them.”

Acting Director of the Tsavo Conservation Area (TCA), Captain Kenneth Ochieng acknowledged the benefit of fostering harmonious working relationships with professionals from diverse backgrounds and government agencies at such workshops. “These kind of meetings allow us to engage in depth and reach out to various entities,” he said. Capt. Ochieng commended the judiciary for their important role in combating wildlife and environmental crimes. “KWS foresees increased collaboration with more members of the judiciary because you play a part in protecting our heritage,” he said, “We must do what it is entrusted to us by the law.”

KMJA members at the learning session represented courts from the lower eastern region, an administrative area which covers key wildlife landscapes including Amboseli National Park and protected areas and community conservancies in the TCA, which is the largest conservation area in Kenya spanning six counties and reaches the country’s border with Tanzania. KWS Officer-in-Charge, Investigation, Tsavo East, John Were provided an overview of the breadth of conservation priorities in the Tsavo landscape, noting that in addition to illegal grazing and bushmeat hunting, emerging wildlife crimes in the landscape involve possession and trade of the critically endangered pangolin and the endangered East African sandalwood shrub. KWS Prosecution lead Kiplagat Talam presented on recent legislative amendments to the Wildlife Conservation and Management Act (2013) and how the revised regulations and stronger penalties pertaining to critically endangered species may help deter offenders.

With continuous and thorough analysis of various aspects in Kenya’s criminal justice system, AWF’s court monitoring program has identified the importance of engaging with judicial officers and court user committees (CUCs) on wildlife issues as a key strategy in combating wildlife crime. In June 2021 and September 2021, AWF hosted the Mutomo and Taveta CUCs, respectively, in Tsavo East National Park for a multi-agency sensitization workshop. In August 2021, AWF facilitated learning sessions and excursions for 21 judicial officers and prosecutors at the KWS Law Enforcement Academy, where they interacted with junior officers and other key KWS personnel .

Reflecting on the impact of the KMJA workshop, Kasyoki commented, “Judicial officers now appreciate the need to conserve the environment. Synergies have been built by virtue of their desire to be incorporated in other programs and how they deal with wildlife offenders more firmly than before.”

After an overview of AWF’s Wildlife Cybercrime program, the workshop closed with remarks from incoming Chair Honorable Ireri, who was elected at the association’s Annual General Meeting at Voi Wildlife Lodge the day before. Thereafter, the judicial officers toured the Tsavo East National Park and attended a special gala dinner.