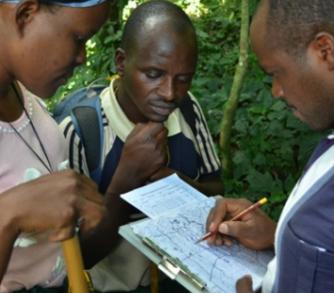 The Bwindi Impenetrable National Park in Uganda is home to approximately half of the world’s remaining mountain gorillas. Poaching, habitat loss, civil unrest, and disease all remain as major threats to gorilla populations, and as a result, accurate population numbers are critical to protect this species.

Gorilla populations have increased since 2006.

In 2011, African Wildlife Foundation, through the International Gorilla Conservation Programme (IGCP, a coalition of AWF, Fauna and Flora International, and WWF), provided assistance on a new mountain gorilla census in Bwindi to gauge population trends and develop conservation strategies. In this latest census, teams systematically moved through the forest in two sweeps, documenting gorilla nests and evidence of movement, and collecting fecal samples for genetic analysis.

The results of this census show that the number of gorillas has increased from 302 in 2006 to 400 in 2011. This increase in numbers is attributed to improved censusing techniques—the genetic analysis helps eliminate the accidental double-counting of mountain gorillas—as well as actual population growth. More importantly, it raises the global population estimate to 880 mountain gorillas.