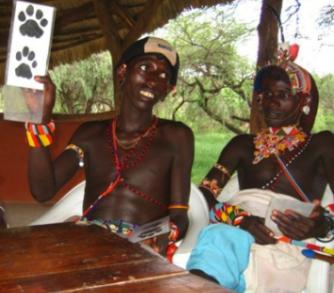 Kenya’s lions could be extinct in the next two decades.

Habitat loss and conflict with humans are the prime culprits of the drastic reduction in lion populations across Africa. Kenya’s lion population is now fewer than 2,000 individuals. The Ewaso Nyiro ecosystem of northern Kenya provides a critical habitat for these cats, but lions in this region are highly vulnerable to their pastoralist neighbors and conflict regularly occurs when lions attack livestock.

The Ewaso Lions Project was founded in 2007 to address the issues facing lions through scientific research and community outreach programs to promote human-carnivore coexistence.

With support from African Wildlife Foundation, the Ewaso Lions Project has trained a surprising group of local people—morans, or Samburu warriors—to protect endangered predators. In exchange for a food stipend and weekly lessons in reading, writing, and arithmetic, these warriors monitor wildlife using a Global Positioning System (GPS) and collect data. The warriors report animal sightings, incidents of human-wildlife conflict, and illegal activities like poaching. As wildlife ambassadors, they also discourage people in their communities from killing predators in retaliation for hunting their livestock.

The program is seeing a great deal of success. When the project first began in early 2010, only five morans participated in the project. As of July 2012, 16 warriors keep watch on the lions. To learn more, visit Ewaso Lions here.