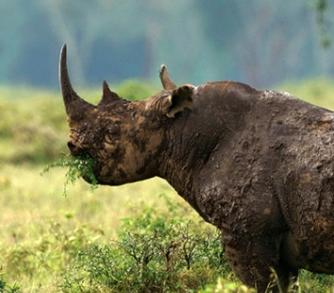 More than 75% of the world’s rhino population lives in South Africa.

Black rhinos are classified as critically endangered by the International Union for Conservation of Nature (IUCN) Red List, with the western black rhinoceros declared officially extinct by the IUCN in 2011. Habitat loss and human encroachment only account for a fraction of the decline in rhino population. Instead, poaching remains the biggest threat to the continued survival of this charismatic species.

Guards are needed to protect rhinos.

To combat the threat of poaching, African Wildlife Foundation has begun support of the Great Fish River Nature Reserve in South Africa. This reserve is home to critically endangered black rhino. This funding will be directed toward buying vital equipment and supplies and upgrading communications within the nature reserve. By improving park rangers’ field capacity, AWF will also improve their ability to track rhino populations, document poaching threats, and use information to adjust strategies and tactics.