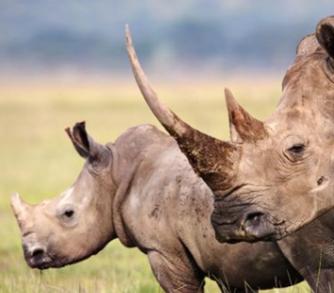 Even protected areas are not completely safe from poaching.

Hluhluwe iMfolozi Park, in South Africa, is one of the flagship protected areas of the Ezemvelo KwaZulu–Natal Wildlife, the provincial nature conservation authority for the KwaZulu–Natal Province. The park was founded specifically to protect the world’s remaining populations of white rhino. It had a remarkable conservation success story—the South African National Parks’ efforts helped increase the white rhino population and rhino were even farmed out to repopulate other parts of Africa. The park also cares for those youngest victims of poaching—orphaned rhino calves.

Unfortunately, even closely protected areas are not always safe from determined poachers. In 2012 the park lost 30 rhinos, compared to seven in 2011, and staff needed help to prevent further losses.

Equipping scouts with the tools to protect rhinos from sophisticated poachers.

The modern poacher is not a lone operator looking to make a quick buck from illegal wildlife products. Today’s poachers are militarized and savvy. They employ advanced technology, like helicopters and AK-47s to kill rhinos for their highly valued horns. In fact, the illegal wildlife trade is the third most lucrative black market trade in the world. Rangers must be able to compete with poachers, and to do so they need the right technology.

African Wildlife Foundation, through a grant from the Flora Family Foundation, was able to equip the rangers at Hluhluwe iMflozi with the tools to help them track and catch poachers. We provided rangers with all-terrain vehicles, metal detectors, digital cameras, tents, Maglite torches, and camera traps. In the past year rangers arrested 12 poachers, resulting in six successful convictions. With the proper tools, they were able to use DNA technology to link carcasses to confiscated horns.