Mankind is the biggest threat to land and wildlife.

Africa is a huge continent that is rapidly changing and growing. Unfortunately, people are threatening Africa’s natural habitats and biodiversity—many without fully realizing the consequences. Through smart planning and active community involvement, African Wildlife Foundation can help Africans develop a modern Africa that also protects its natural treasures.

Africa is one of the poorest regions in the world. Individuals seeking opportunities to better livelihoods, coupled with a surge in prices for resources such as aluminum, copper, and forest products, has led to a large increase in resource extraction, both at the individual and industrial levels.

And, the picture is equally worrying when it comes to deforestation. In Africa, 90% of the population use wood as fuel for heating and cooking. With other pressures in the form of land clearance for agriculture, heavy livestock grazing, and industrialization, Africa’s lush forests are rapidly being cut down. Already, almost 90% of West Africa’s original forests have been wiped out.

The human-wildlife conflict is based on a competition for resources.

The relationship between humans and wildlife is a challenging one. While people place boundaries around their homes, communities, and countries, wildlife doesn’t recognize it. It often roams outside park boundaries and onto land owned by communities.

When this happens, wildlife causes substantial damage to fields as well as eating the communities’ crops. This naturally can create tension, which can quickly turn into human or wildlife injuries, even death. As people and wildlife increasingly find themselves living alongside one another, there continues to be a struggle for resources and human-wildlife conflict.

Illegal wildlife trafficking is believed to be the world’s fourth most valuable illicit commerce. This US$10 billion per year trade spans borders and continents. The illegal wildlife trade is an environmental crime that rips species from their habitat, harms the environment, and endangers the future survival of both wildlife and ecosystems—but it also threatens national security and global economies.

The poaching of wildlife—such as gorillas for meat, elephants for ivory, and rhinos for their horn—is on the rise and threatening the very survival of these species. In 2011, 23 metric tons of ivory representing 2,500 elephants—and countless billions of dollars—was seized.

A rise in consumer demand isn’t the only reason wildlife is stalked. Many Africans hunt wildlife for bushmeat to eat or to sell to earn money for their survival.

There are fewer and fewer places to call home.

As Africa’s forests, rivers, and land continue to disappear, it is clear that habitat loss is the greatest threat to wildlife. Ecosystems can change drastically from human activities like natural resource exploration, agriculture, and industrial developments such as pipelines, housing, and roads. When the land can no longer support wildlife, it leads to the displacement of wildlife or worse: extinction.

Often, human activities or natural geological processes break up critical habitat into disjointed fragments. When this occurs, species find themselves in areas too small to support them, making it difficult to find food and mate. Habitat fragmentation can also disrupt vital migratory routes. This endangers species, which in turn threatens the land that may have depended on them.

By working with governments and communities, AWF has successfully developed community conservation reserves that not only set aside habitat and protect wildlife from poachers, but also provide jobs for locals to protect those areas and create opportunities for enterprises that can bring in additional money, such as from tourism.

Many Africans enter forests and cut down wood to use for cooking over open fires. To reduce deforestation, AWF is promoting Reducing Emissions from Deforestation and Forest Degradation (REDD+) programs that let communities “sell” the financial value of carbon stored in nearby forests to potential buyers looking to offset their carbon emissions. In addition, AWF has provided fuel-efficient energy options for communities, such as by opening a shop that sells fuel-efficient cook stoves in a rapidly growing Kenyan community.

AWF works with communities directly to prevent these kinds of conflicts. Take the mountain gorilla for example. There are only an estimated 800 left in the world, found in lush national parks. People who live nearby trespass into these parks in search of free water, which can lead to violent human-gorilla conflicts and expose the critically endangered mountain gorilla to human diseases.

Through a collaborative effort among AWF, Fauna & Flora International, and World Wildlife Fund (WWF), AWF is providing communities with communal and household tanks that catch rainwater so they don’t need to trespass into parks.

AWF provides funding to recruit and train locals as rangers and scouts. As the first line of defense when animals roam outside of national parks, scouts use Global Positioning System (GPS) units to record wildlife sightings, mitigate human-wildlife conflict incidents, and prevent poaching and vegetation destruction.

Explore some of our related projects: 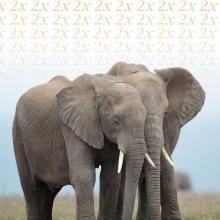 Give 2x for wildlife this holiday season