African Wildlife Foundation began its landscape conservation work by supporting national parks. But, wildlife is not confined to parks—so AWF took the next logical step, working with local communities near parks and other wildlife areas to help them manage their lands for conservation across broad landscapes.

Ultimately, AWF works to unite villages, parks, and reserves in a vast, cohesive landscape—training, and compensating, local communities to work together to conserve wildlife and migration routes while protecting and advancing their own economic interests.

Wildlife does not understand borders.

For much of the year, wildlife travels from park to park, and even country to country, following migration routes, searching for food, and seeking calving grounds. These lands that wildlife use to travel, we call wildlife corridors. While in a park, wildlife is protected and has sufficient resources for survival, but once it travels outside of those boundaries, there is no assurance of security.

Africa’s people are trying to improve their livelihoods and economies.

The once-pristine land in Africa is quickly being converted into grazing grounds for livestock, tilled for agriculture, or degraded by activity such as timber harvesting. The biodiverse, open ecosystems wildlife was once able to travel through is now fragmented by agricultural plots and fences—and, oftentimes, dangerous due to illegal hunting.

In Tanzania, wildlife was traveling 40 km between Lake Manyara National Park and Tarangire National Park; however, migration routes began to disappear as agriculture and settlements cropped up. AWF helped establish Manyara Ranch Conservancy, a government-owned ranch that is now a mixed-use conservation area where wildlife can roam between the two parks.

In other cases, AWF pays landowners to set aside their land for wildlife. This type of arrangement allows people to benefit from leaving their land open while also conserving key wildlife spaces.

AWF also works with individuals who own large areas of land and wish to designate their lands as protected spaces. In Kenya, John Keen and his family signed an environmental easement agreement to AWF and Kenya Wildlife Service whereby they voluntarily restricted use of their land in order to keep it open for wildlife. Keen’s land, which is adjacent to Nairobi National Park, essentially added another 107 hectares to the park and is helping to counter the decline of wildlife due to development and land fragmentation. The Keen Easement ensures that the land stays pristine for wildlife in the future.

Sometimes, we get a little help from Disney and the public. AWF partnered with Disney in 2011 to cross-promote the Disneynature feature film, “African Cats.” A portion of opening-week ticket sales was donated to AWF. We then used the funds to provide lease payments in the Amboseli Wildlife Corridor, a passage between Amboseli, Tsavo West, and Chyulu Hills National Parks that is frequented by a variety of wildlife.

Explore some of our related projects: 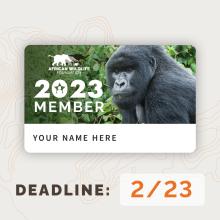