Defying Stereotypes about Women in Conservation

Defying Stereotypes about Women in Conservation 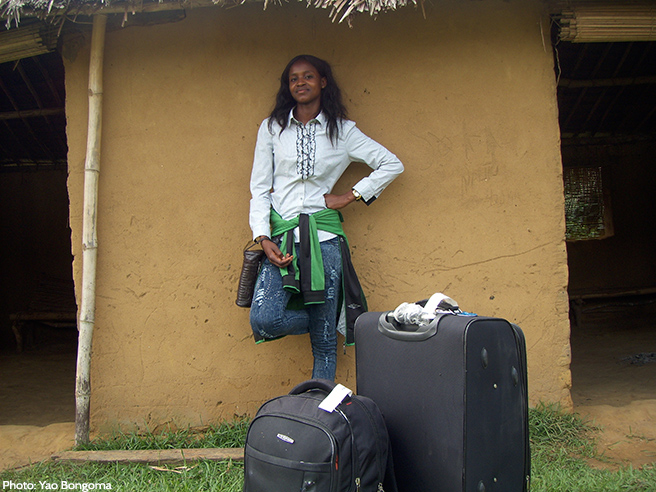 You might know that Iyondji Community Bonobo Reserve had 24 new eco-guards trained last October as part of AWF’s support to the reserve’s management structure. However, you probably know less about Pacha Lotango, the young female eco-guard who graduated top of that class.

In November, whilst leading a 9-man patrol on a 6-day mission in the north block of the reserve, Pacha was ambushed by an entire village responding to a cry for help by one of its members under custody for illegally hunting in the area.

Pacha's patrol was setting up camp for the night, and were again combing the surrounding to make sure there wasn't another human presence.  When the villagers attacked, the unit was a bit spread out.

Pacha immediately ordered her unit not to retaliate (eco-guards have mandate to arrest, make use of their firearms, and even pursue offenders as far as 50 kilometers outside of a protected area) and was at the front of it all, ready to try to communicate and engage with the villagers, yet unfortunately suffered a blow to the head during the clash and was rendered unconscious for half a day.

“My right eye received a shock and I lost consciousness,” she told me in French, with a faraway stare as we stood in Djolu several months later, beside a reddish-brown outer office wall made of adobe.  Stones, branches, machetes, bows-and-arrows, and the odd gun were used against her patrol by the villagers that day.  “I awoke at our base.”

As a result of her injury, Pacha was first evacuated to Djolu town, a half-day’s ride away, and then to Kinshasa for appropriate treatment.

The amazing part of this story is that, following her own request to the Head Warden, Pacha returned to the field in late June! I had the opportunity to talk to her for a while at AWF’s Djolu office shortly before she left for the reserve on a motorcycle loaded with her two dark suitcases. Indeed, it was a privilege—Pacha is, without a doubt, a perfect example of the strong women in conservation whom AWF highlighted in connection with the recent 25th AU Summit in South Africa!

You see, Pacha Lotango could easily feature in a glossy magazine, the kind that lobbies and waiting rooms lavish on customers and clients in fancy hotels and high-rise office buildings; or she could valiantly head up a sales department in a male-dominated Congo service industry, positively conveying naturally expected corporate values, such as integrity, caring, teamwork, commitment, and responsibility to a T.

And yet, for reasons that no doubt elude many of us, the path she chose—not long after receiving her Bachelor's Degree in commerce from a business institute in Kisangani—takes her to the often unwelcoming, unpredictable outdoors, dressed in green kakis, heavy army boots and carrying a 20-30 pounds rucksack on her back for hours at a time.

Pacha is exceptional; a pioneer humbly enacting positive change and demonstrating incredible courage. Can you imagine facing a strange man with a 12-gauge hunting rifle (their favorite weapon) deep in a dark forest?

In the meantime, it’s worth remembering that women in the DRC have not yet gained gender parity.  Women (and girls) in the country face multiple disadvantages such as access to education (especially secondary and above).  DRC figures from the United Nations Human Development Reports show that only 10 percent of women aged 25-and-above have at least some secondary education, and that 13 percent of women typically give birth to a first child between ages 15 and 19.

Ensuring women have access to a variety of jobs and can become self-reliant is a hallmark of AWF’s community work. See how we’re working with women in the DRC to establish new sources of income.