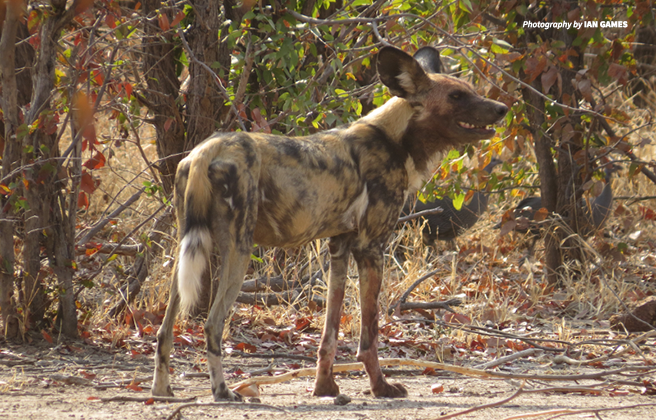 Famous for its sizeable populations of elephants and large carnivores, Hwange National Park in Zimbabwe is also home to one of the most elusive predators on the continent: the endangered African wild dog. About 160 wild dogs—also known as “painted dogs” for their colorful, patchy coats — live in Hwange and its environs. As more people settle around Hwange, the African wild dog population faces increasing pressure in the form of habitat fragmentation and human-wildlife conflict. The most pressing threat to the wild dogs’ survival, however, is poaching.

With limited employment opportunities and sporadic rainfall that negatively impacts farming yields, bush meat hunting has gained popularity over the past several years as a means to make a living.

Poachers commonly use wire snares, which kill large animals indiscriminately. Wild dogs are particularly vulnerable to injury or death by snares because they cover a lot of ground while hunting. (Wild dogs travel more than 12 miles per day on average.) In addition to snares, poachers sometimes poison water sources with cyanide. They are normally targeting elephants for their ivory but kill a variety of other species in the process.

Stemming the tide of poaching within Hwange National Park has proven challenging for the resource-strapped Zimbabwe Parks and Wildlife Management Authority — not to mention the fact that protecting the park itself is not sufficient. Wild dogs and other species frequently travel beyond the park’s borders into its buffer zones, where the risk of encountering poachers and snares is higher.

As Peter Blinston, Executive Director of Painted Dog Conservation, explains, “Anti-poaching patrols provide the most effective blanket of protection across the landscape. All species, from painted dogs to lions to elephants, benefit. Support from AWF has enabled us to increase this protection.”

According to Blinston, Painted Dog Conservation supplements ranger patrols with community outreach for the simple reason that poachers often come from local communities. “The Zero Tolerance campaign aims to leverage support from the surrounding communities…We have posters placed in many locations from the post offices to beer halls and local shops. Anyone can phone in, free of charge, and report illegal activities.”

These intensified efforts have achieved impressive results since AWF provided support in 2014. In the subsequent three years, the anti-poaching unit — comprising Painted Dog Conservation rangers and local volunteers — has increased its patrols in the national park's buffer zones. On average, these patrols remove more than 100 snares per month while apprehending poachers and destroying poaching camps. Rangers also detect and dispose of cyanide while on patrol, preventing the deaths of any animals that would have quenched their thirst with contaminated water. In the nine-month period from April through December 2016, patrol efforts led to the arrests of eight poachers.

In areas with regular ground patrol presence, a reduction in poaching activity has been reported. Local communities’ attitudes toward wild dogs, meanwhile, are generally more positive. The wild dog population in the Hwange landscape is stable — a testament to the success of these efforts. The hotline for reporting poaching has even helped species other than wild dogs, with some tip-offs about planned elephant poaching activities.