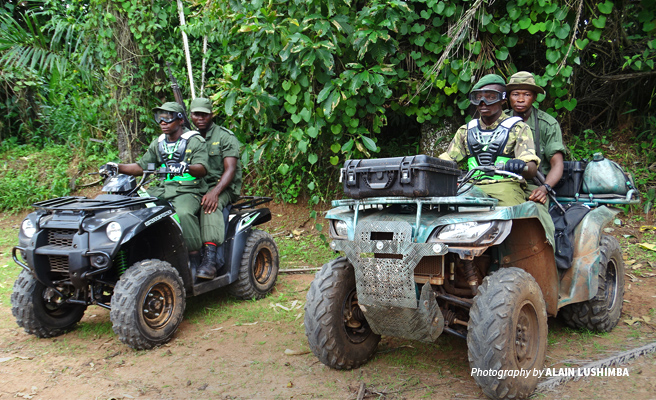 Alain Lushimba spent more than eight years at African Wildlife Foundation as Technical Advisor — initially overseeing the organization's acitivities in the Bili-Uele Protected Area Complex in the Democratic Republic of Congo before taking up a similar position at the Dja Faunal Reserve in ... More

The Bili-Uele Protected Area Complex in northeastern Democratic Republic of the Congo comprises a region anchored by four protected areas totaling more than 40,000 sq. kilometers. The landscape boasts the largest population of the endangered eastern chimpanzee subspecies and one of the DRC’s last populations of the vulnerable forest elephant.In spite of the ecological importance of Bili-Uele, until recently, the DRC’s protected area authority lacked the resources necessary to manage the area effectively. African Wildlife Foundation, with support from the European Union, is working closely with the Institut Congolais pour la Conservation de la Nature (or ICCN) to establish a base with a team of 30 rangers in the Bili-Mbomu core area. Since 2015, the focus has been on recruiting, equipping, and training rangers in ecological monitoring and anti-poaching using CyberTracker and the Spatial Monitoring and Reporting Tool (SMART). Within the first year, anti-poaching patrols covered about 5,000 sq. kilometers and more than 2,000 kilometers – even though every step in the forest carries the risk of crossing paths with armed bandits.

Being a poor and isolated part of DRC, local livelihoods within the landscape’s river systems and savannah mosaic are built on hunting, agriculture, pastoralism, and artisanal mining. To mitigate these threats to biodiversity, AWF and ICCN have established five community conservation committees and has already educated more than 300 men and women on the country’s conservation laws. 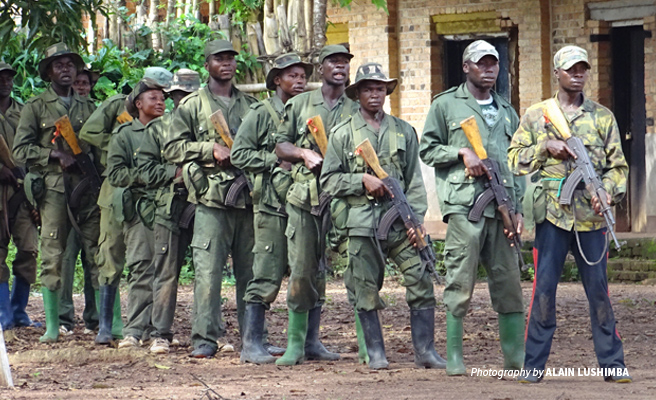 Conservation in Bili-Uele requires defending wildlife not only from threats common in other landscapes such as poaching and habitat loss, but also from small armed groups of the Lord’s Resistance Army. The bandits have repeatedly attacked villages near the town of Bili, kidnapping villagers, looting their homes, and assaulting village leaders in some cases.

With initial support from the U.S. Fish and Wildlife Service, AWF and ICCN worked in partnership with the Armed Forces of the Democratic Republic of Congo and security firm Maïsha Consulting to establish a management presence in the landscape. To keep rangers safe while enhancing the effectiveness of patrols, AWF provided two all-terrain quad bikes to ICCN to serve as mobile anti-poaching bases. The units are equipped with radios, first aid supplies, camping gear, and a system for transmitting data remotely. The mobile units help rangers cover ground more quickly, avoid ambushes by poachers, communicate in real time with their base station and, when necessary, transport injured rangers back to the base station rapidly.

The new mobile bases, along with increased patrols in key sectors of the landscape, are making the wildlife authority’s presence felt. About a year into implementing an intensive anti-poaching strategy, patrols have begun to see a decline in direct human encounters, snares, and ammunition cartridges in the landscape. 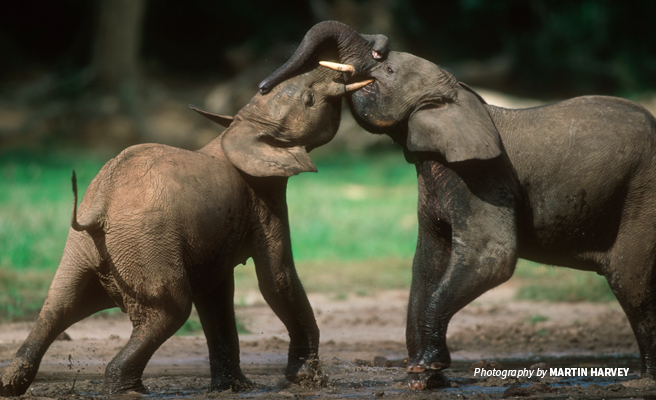 To inform patrol deployment strategies, AWF and ICCN conducted the first census of large mammals in the area. AWF’s Technical Advisor led the development of a baseline survey for a forested area of 5,800 sq. kilometers in the Bili complex, based on a mammal survey protocol used in DRC’s Congo landscape.

The survey found fewer indications of elephant presence than a 2004-2007 survey conducted by Cleve Hicks, evincing that poaching remains a threat to the elephant population. Along with chimpanzees and elephants, the latest survey confirms evidence of more than 20 large mammal species, including the lion, bongo, giant pangolin, hyena, and golden cat. The presence of chimpanzees and elephants — whose once-strong population in this region had very nearly become nonexistent — affirms the area’s importance as a priority conservation landscape.

To ensure that the participative and sustainable strategy for long-term conservation meets the needs of community stakeholders, five community conservation committees have been set up to educate locals on the country’s conservation laws. In recognition of the Bili-Uele landscape’s high biodiversity value and the success of AWF and its partners to date, ICCN signed a Memorandum of Understanding with AWF in September 2016 to co-manage critical parts of the landscape for the next five years. The agreement represents a major step toward securing Bili-Uele and its wildlife well into the future.

> Learn more about AWF's chimpanzee survey in the Bili-Uele landscape