William H. Funk is a freelance writer and documentary filmmaker with a passionate concern for the wildlife of Africa. With a background in environmental law and policy, he works whenever possible to promulgate stories and ideas th ... More 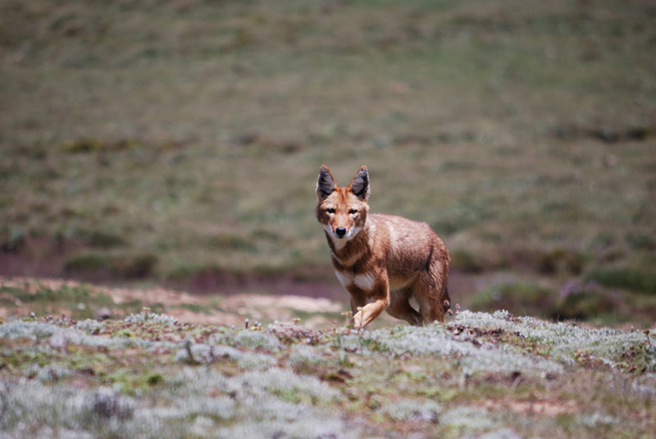 When we reflect upon our natal continent, our thoughts tend to coalesce around those megafaunal giants that have forever haunted the human imagination.

Elephants, rhinos, lions and leopards are what we’re accustomed to viewing as “African wildlife,” but the animal I’d call your attention to today might seem as exotic to Africa as a grizzly would be to Antarctica. Allow me to introduce the Ethiopian wolf, a member of the same genus as our familiar gray wolf whose native range formerly extended across most of the Northern Hemisphere. With their long legs and rusty coats topping a shining white undercarriage, the Ethiopian wolf resembles a large jackal or perhaps a dingo more than what we think of as a “wolf,” but the species has had its lupine lineage proven by recent mitochondrial DNA testing.

The Ethiopian wolf is the only wolf species known to inhabit Africa, presently. Like coyotes, the Ethiopian wolf will sometimes form loose packs to hunt smaller antelope like duiker and mountain reedbuck, but for the most part this is a solitary hunter of the numerous rodent species to be found across its limited range amid the Afroalpine highlands, the delectable giant mole rat being a favorite.

The Ethiopian wolf is the rarest and most endangered canid in the world. Habitat loss from gnawing human encroachment; rabies, distemper and parvovirus spread from domestic dogs; increasing genetic isolation as the remaining wolves resort to breeding with dogs in the absence of potential intraspecific mates; all of these threats are chipping away at the wolves in their final montane refuges. Like squeezing a tube of toothpaste, the Ethiopian wolf’s tiny subpopulations are being constricted by human activity to higher and higher altitudes, uncertain redoubts where they are forced to adapt their ecological behaviors in impossibly brief periods of time.

As part of AWF's Urgent Response Fund, the organization is working with communities to undertake vaccinations for local dogs, preventing possible disease outbreak among the wolf population. AWF is also creating income opportunities through cultural tourism in order to reduce community dependence on subsistence farming and incentivize conservation / protection of the wolves' habitat—Simien Mountains National Park.

There are no Ethiopian wolves in captivity; if these few fragmented populations remaining in the wild today are allowed to blink out, one by one, in the drowning pool of human hegemony, we will have lost yet another irreplaceable wonder of our world. Ethiopia meanwhile has the fastest-growing human population in Africa.