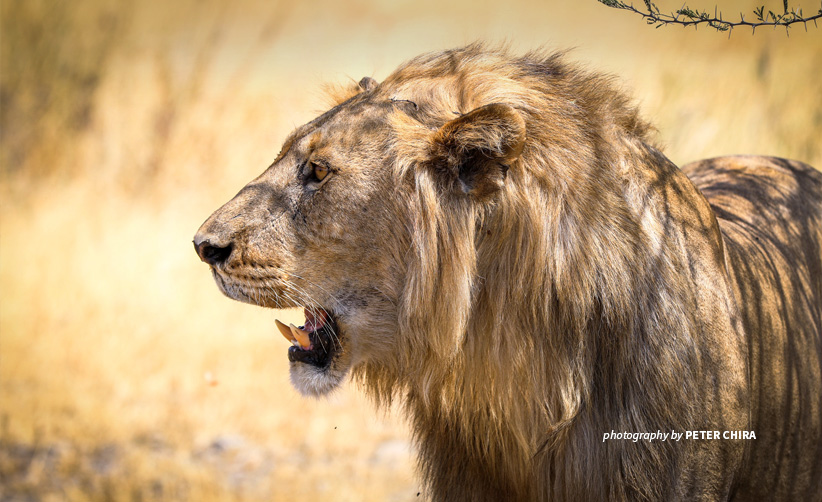 Bomas are traditional wooden or thorn-bush/wire mesh enclosures designed to keep cattle in and predators out. With help from African Wildlife Foundation, Tanzanian Maasai pastoralists living around Manyara Ranch have benefited from an upgrade: mobile, predator-proof, metal bomas.

Herders move with these enclosures and their cattle periodically, following water and grass growth. In this way they can help restore degraded habitat — rotating the livestock strategically, the herders help overgrazed areas to regenerate healthy grasses.

AWF supports the construction of bomas for families around Manyara through a cost-sharing program, reducing the financial burden. Even still, when Manyara Ranch’s manager Fidelis Olekashe introduced the metal bomas to community members, they were not interested. They essentially said, “Why do we need this? We have our own bomas.” But the old-style wood bomas are not nearly as good at keeping out lions. The metal bomas, which can be dismantled and reassembled in 15 minutes, offer an unprecedented level of livestock protection. “After a while, they see the lion can come around the boma, but he cannot even touch the cow,” said Olekashe. “So now everybody says, ‘We want that.’” AWF is proud to be the first NGO in Tanzania to introduce the mobile bomas.

In Amboseli National Park in Kenya, a boma project across multiple group ranches led to a sharp decline in livestock killings. Said resident Mzee Sakimba: “I have lived here for over 40 years with lions and hyenas taking away my livestock. ...I have lost 27 goats, 15 sheep and 60 cows to predation over the years. Recently, I decided enough is enough, no more loss. I took a positive action by improving my boma. Unlike before, I sleep well and I have not lost any of my goats and sheep again.”

In one study in the Amboseli ecosystem, predator-proof bomas were shown to reduce livestock predation by more than 90 percent. AWF field staff members’ own experiences support this finding. 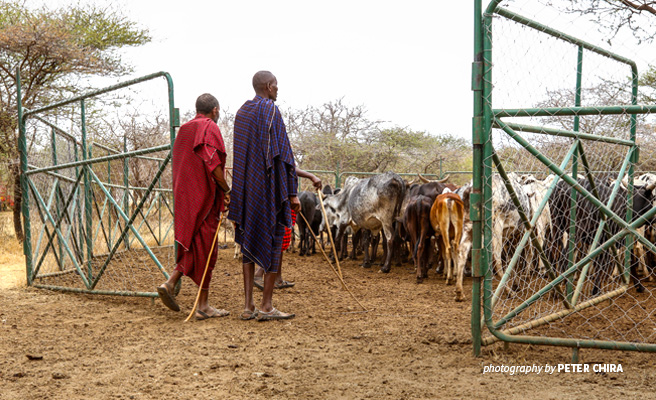 Around Murchison Falls and Kidepo Valley National Parks, AWF and the Uganda Wildlife Authority introduced chilies as an effective elephant deterrent. Chilies can be used in various ways. Bricks made from chili powder and cow dung produce acrid smoke when burned, while ropes soaked with chili oil and strung up between agricultural plots keep wildlife away with their harsh vapors. Intercropping with chilies is another method. Chilies not only repel elephants, but they are also a lucrative cash crop for farmers.

The continued success of our programs has enabled farmers to purchase additional livestock, make home improvements, and, in some cases, provide school fees for their children.

Research has shown that African elephants respond to the buzzing of bees. They shake their heads, emit low, rumbling alarm calls, and flee. Beehive fences — typically hanging hives spaced out every 10 meters or so — exploit this aversion to bees (or probably more accurately, to being stung). AWF has supported farmer-led beehive fence projects outside of Udzungwa Mountains National Park, Selous Game Reserve, and Magombera Forest in southern Tanzania. The fences not only deter elephants from raiding crops, they also provide a new revenue source, as the bee farmers can market eco-friendly honey and beeswax. 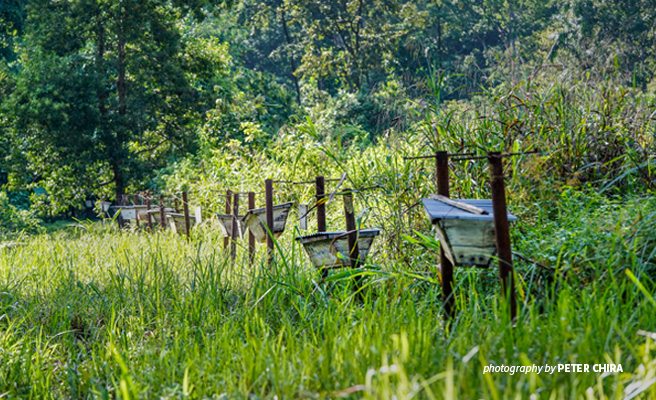 The Tsavo-Mkomazi landscape in Kenya and Tanzania is home to more than 12,860 elephants, close to half of Kenya’s total population. As unplanned farms and settlements increasingly obstruct the paths of foraging elephants and other wildlife, more farms, people, and elephants are at risk. To help safeguard wildlife and improve crop yields, AWF is working with the Kenya Wildlife Service staff (who respond to villagers when elephants are unwelcome visitors).

In summer 2018, we and Kenya Wildlife Service led a series of training workshops in farming villages throughout the landscape. Lessons focused on how to prevent conflict with wildlife, using proven deterrents such as noisemakers, fences, trenches, and lights. Trainers also discussed when it might be necessary to use simple avoidance — working around the known schedules and patterns of wild animals — when it is time to gather water or walk somewhere.

Addressing conflict requires solutions that benefit wildlife and people. Then, communities are in a position to recognize the value of living in harmony with their iconic wildlife neighbors.