Kenneth Kimitei is African Wildlife Foundation’s Landscape Ecologist in the Tsavo-Mkomazi Landscape. He works with government agencies, community-based conservation organizations, and the private sector to streamline sustainable development, ecological monitoring, and conservation of natural re ... More

At its southern reach, Kenya’s Tsavo Conservation Area crosses into Tanzania, encompassing Mkomazi National Park and critical dispersal areas for the region’s iconic wildlife. The area, covering more than 47,000 sq. kilometers, is home to more than a third of Kenya’s elephant population and 18 percent of its black rhinos.

Comprising three national parks and reserves, as well as community conservancies and ranches, Tsavo is the biggest contiguous wildlife area in Kenya. Although communities in Kenya and Tanzania have neighbored protected areas for many years, many community members are under increasing pressure to overexploit natural resources to make ends meet. Some even turn to poaching while others contend with wildlife incursions and are forced to retaliate in defense of their families, crops, or homesteads.

Fostering community engagement in wildlife conservation in a dynamic transboundary biodiversity area is vital for long-term ecosystem management. However, because it stretches across two countries, the Tsavo-Mkomazi Transfrontier Area requires an adaptive, integrated approach to overcome various challenges — from streamlining cross-border anti-poaching operations and wildlife law enforcement to improving standards of living for all of the people depending on the landscape.

African Wildlife Foundation’s strategy in Tsavo-Mkomazi brings together government institutions, including the Kenya Wildlife Service, Tanzania Wildlife Authority, Tanzania National Parks Authority, as well as County, District and Village Councils. For the last three decades, AWF has supported rhino conservation in Tsavo West National Park. In 2016, we scaled up our conservation programs to target elephant, rhino, lion, wild dog, and other transboundary wildlife species with support from AWF’s Species Protection Grants, the Donald Daniels family, and the D. N. Batten and Nancy-Carroll Draper Foundations. Thanks to a generous grant from Daniel Maltz, we added giraffe conservation activities to the landscape in 2018. AWF helps bring local communities into the fold while building wildlife law enforcement and intelligence frameworks to combat poaching and human-wildlife conflict. We are extending this approach across the Kenya-Tanzania border with support from the European Union and German development agency GIZ. 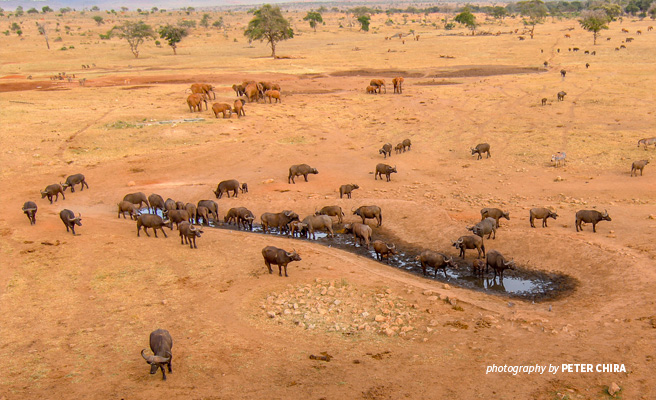 Responsible for anti-poaching operations, handling human-wildlife conflicts, and collecting ecological data, community scouts are at the frontline of wildlife conservation. They provide an important linkage between their communities and wildlife management authorities. Since early 2017, we have facilitated 12 sessions with County, District and Village Councils on both sides of the border to guide the identification, selection, and vetting of community scouts. In the LUMO Community Wildlife Sanctuary in Tsavo, we bolstered the 14-strong unit with refresher training courses — a critical step in the U.S. Agency for International Development-funded program that helped overturn years of habitat degradation through improved enforcement of grazing plans in the group conservancy. Further south in Tanzania, 14 scouts have been recruited and trained for the unit in Toloha — a critical area between Tsavo West National Park and Mkomazi. We also established a unit of 19 community scouts in Same District in March 2019. Before these squads are deployed to the field, our outreach teams meet community members to sensitize them on the need for scouts and explain how they will handle human-wildlife conflicts and poaching cases. The scout selection process is also shared during these meetings. 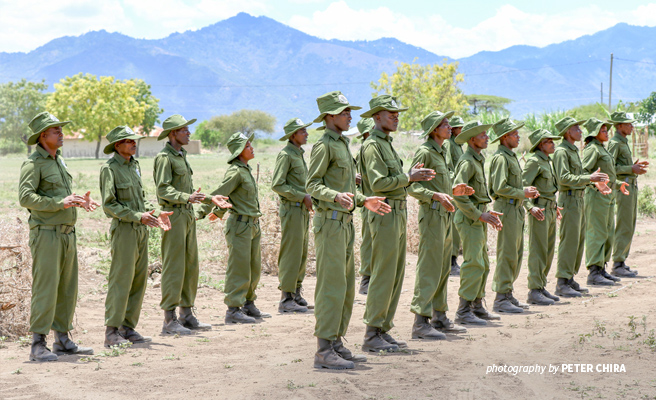 Teams from Tsavo West National Park and Mkomazi National Park conduct quarterly joint and concurrent patrols along the border guided by intelligence information in the database that will be useful for subsequent operations. With better integrated information-sharing mechanisms, patrolling rangers and scouts are more effective.

A special joint and concurrent patrol is organized at the end of every year to target illegal activity over the festive season. Expecting low law enforcement over this period, wildlife criminals tend to ramp up and also take advantage of the holiday market. Ten rangers from both Kenya Wildlife Service and Tanzania National Parks participate in the exercise alongside community scouts in areas covering the villages. The last patrol from December 22, 2018 to January 2, 2019 saw seven poachers arrested for bushmeat trade related offenses; 38 snares were lifted, and illegal grazers were penalized. Since the start of cross-border patrol operations in July 2016, elephant poaching has declined substantially in Tsavo-Mkomazi. Notably, in 2018 there were no elephant poaching incidents in the Toloha area compared to three poached elephants reported in the previous year.

A secretariat comprising five members from Kenya and Tanzania each represents the stakeholders across the border and facilitates community-level awareness campaigns, wildlife conservation programs, and cross-border meetings. Three clusters in the priority area — Rombo, Jipe, and Mkinga — recently agreed on land-use planning and bylaws in villages to curb poaching and habitat degradation.

To improve our understanding of the prevalence of human-wildlife conflict in the Tsavo-Mkomazi area, we developed hotspot maps based on reported cases. Using data from districts, the real-time threat assessment model informed rapid response teams and highlighted where community wildlife scouts should be deployed, or where farmers need mitigation training and simple tools. As first responders to wildlife conflicts, community members — particularly in cultivated areas — and community scouts play an important role.  AWF has provided eight motorbikes for Toloha, Rombo, and Same scouts to respond to distress calls. Across 13 hotspot sites identified in Kenya and 33 villages in Tanzania, we have trained 2,760 farmers and distributed 320 torches and 640 pressure horns that scare off elephants and other destructive animals from their farms. In addition, 500 fireworks were provided to wildlife authorities to help bolster communities’ human-wildlife conflict mitigation efforts. 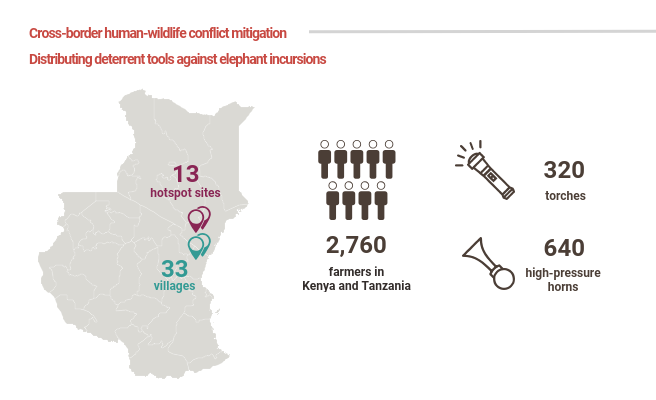 In the two years since AWF started working in LUMO Community Wildlife Sanctuary, training community members in key areas of concern such grazing, benefit sharing, governance, and improving interpersonal relationships has eased the land restoration process. By the end of 2018, only 10 incidences of illegal grazing and two poaching incidences were recorded in LUMO, signifying a 95 percent reduction of both illegal grazing and poaching. Under improved management, wildlife species on the 48,000-acre conservancy were able to establish resident populations. Transect data from 2018 shows significant growth of giraffe and zebra populations, rising from 3 percent and 6 percent respectively to 29 percent and 84 percent. The oryx population has also been increasing steadily from zero herds observed to eight of 18-30 individuals. The conservancy’s total revenues have more than doubled since the program started in 2017.