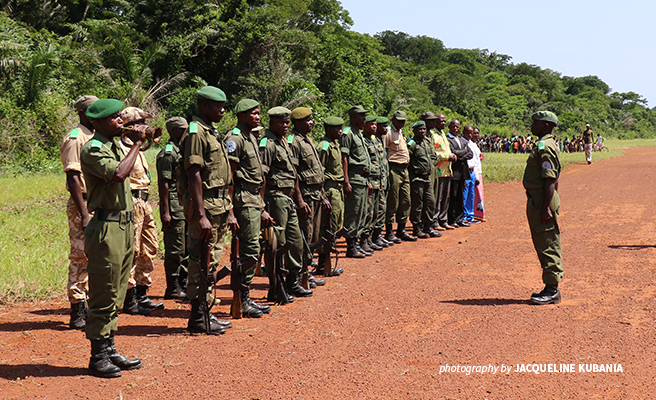 Jean Niwiya has known both sides of the illegal wildlife trade. Before 2015, the 39-year-old father of eight made his living snaring small wildlife in the expansive Bili forest in the Bas-Uele Province of the Democratic Republic of Congo and selling it as bushmeat. He would mostly hunt antelopes and chimpanzees. Sometimes, he would go for bigger game, killing elephants primarily for their ivory, which he would sell for approximately US $100 per kilogram. With a tusk weighing 3 kilograms, he could feed his family for months. Niwiya did not know any other way of life. In 2015, the Institut Congolais pour la Conservation de la Nature (or ICCN), the government body mandated to protect and conserve DRC’s wildlife, set up a new base in Bili-Uele with support from the African Wildlife Foundation. ICCN, in collaboration with AWF, was looking for eco-guards to fight the poaching crisis. With funding from the European Union and United States Agency for International Development, rangers were recruited, trained, and equipped with modern tracking equipment designed to make patrols more efficient. They were also provided with radios, first aid supplies, camping gear, and a system for transmitting data remotely.

Niwiya thought it would be the perfect new job. He had been looking for an exit plan from poaching because he was constantly wary of getting arrested if he continued trading ivory and bushmeat.

“There aren’t many jobs in Bili-Uele, most people are small-scale farmers or traders and they do not make much, which is why I turned to poaching. When ICCN came calling, I decided to become a ranger as a way of making a decent and honest living doing something that I knew I could be good at,” he said.

His experience in the forest makes him particularly well-suited to the work given his knowledge of the terrain and endurance for long patrols. He enjoys being an eco-guard, saying that it has given him a good understanding of the environment and why it is important to keep animals alive rather than killing them for money.

“I now appreciate why a living elephant is worth so much more than a dead one. I want my children and grandchildren to see elephants and other wildlife for themselves. I want them to take pride in this heritage because it is unique to Africa,” he said. From killing wild animals, Niwiya has now turned into one of their fiercest protectors. 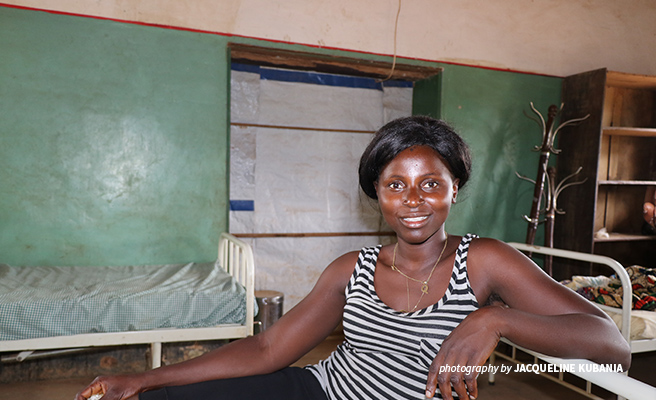 ICCN eco-guard in Bili-Ule Marie Kubate at her daughter's hospital bed. She worries about childcare when out on patrol

For 26-year-old Marie Kubate, working as an eco-guard was one of the few paths she could see that would allow her to provide for her family. She was unable to continue her education after finishing secondary school in 2013. Like Niwiya, she too heeded the 2015 recruitment call by ICCN and trained as an eco-guard.

While she likes the job, she expresses concerns about childcare — she has four children — especially during periodic patrols in the forest that can last up to three weeks.

“I usually leave the children with my younger sister who is only able to look after them in the mornings and evenings because she is still in school. During the day, the neighbors have to keep an eye out for them, which I know is not adequate, so I am constantly worried about them,” she says.

Her children are young and have not yet started school. On the day she speaks to AWF, she is admitted in hospital with her youngest daughter whose fever spiked in the middle of the night, requiring urgent medical care. “It is lucky that this child fell ill while I was at home. Had it happened when I was on patrol, I don’t know who would have brought her to hospital and stayed with her to ensure that she eats and she takes her medicine,” said Kubate.

These challenges make it difficult for her to give her all to the job. In an ideal setting, she would like flexible working hours and the chance to get a higher education to improve her chances in life. 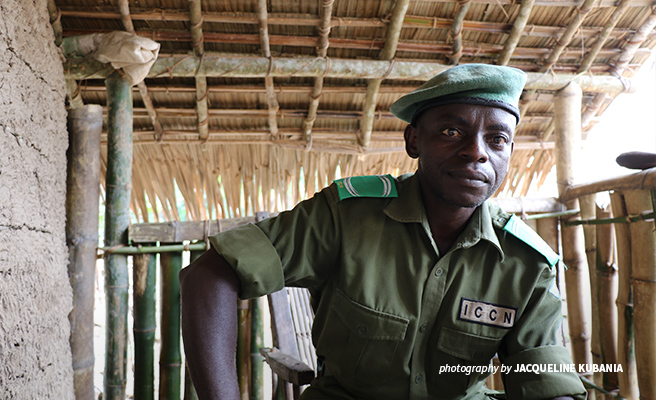 Being an eco-guard in a place like Bili-Uele is not an easy job. The work is hard, the hours long, and the landscape fraught with danger. Last year, for example, a small cohort on patrol was attacked by Lord’s Resistance Army soldiers, and one ranger was shot multiple times. He fortunately survived, but the team lost two motorbikes to the attackers. There are only 25 eco-guards currently in active duty — regular leave days are rare and most have to work overtime. Still, they take pride in the job, as Jean Pierre, who also joined the group at the same time as Kubate and Niwiya, is quick to say.

“We know how important our work is. There is a kind of prestige that is attached to wearing this uniform, picking up a gun, and marching to patrol. We know we are protecting these animals for the sake of our children and that we are improving security so that our families can thrive,” he said. Despite the challenges, both Pierre and Kubate say that they would be happy if their children grew up to become eco-guards.

The presence of eco-guards in the area has helped to not only improve conservation outcomes for the local wildlife, but has also brought much-needed security and the rule of law in this remote part of the DRC, which borders the Central African Republic, and where the nearest town, Buta, is 260 kilometers away. It takes a day of hard riding on a motorbike to get there.

The threats to biodiversity in Bili-Uele are compounded by the dire security situation that has seen Lord's Resistance Army soldiers attack villages and kidnap residents, on top of looting their belongings. In 2016, just 32 kilometers away in Kamusele Village, the soldiers kidnapped 12 children who have since not been found. If security is compromised, the local communities are forced to retreat to the forest for sustenance and abandon their homes and sources of livelihood, therefore putting more pressure on natural resources.

“The eco-guards are great workers. The biggest problem currently is that they are too few to adequately patrol the 11,000 kilometer sq. core conservation area where AWF and ICCN have focused their attention. It would take a minimum of 110 rangers to cover it,” said Julien Nkono, AWF's Landscape Manager at Bili-Uele.

To meet this challenge, the protected area management authority has started to send teams of 15-20 eco-guards on joint patrols with soldiers from the Armed Forces of the Democratic Republic of Congo to areas that have not been patrolled for a long time. This is a stop-gap measure as the ICCN works to increase the number of eco-guards.

In addition, plans are in the pipeline to equip them with more patrol vehicles, better uniforms, health insurance, and housing. “We also plan to regularly pay them bonuses and to improve technical training on ecological monitoring and data collection of human and animal activities,” said Nkono. With this kind of investment, future generations are set to enjoy Bili-Uele’s biodiversity for a long time to come. Poacher-turned-eco-guard Niwiya certainly picked the winning team.