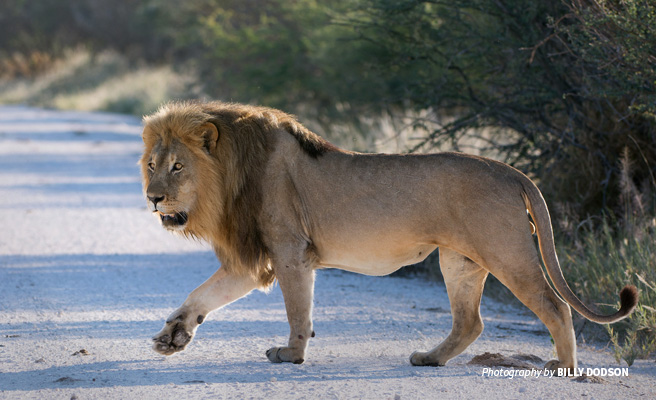 Almost 200,000 lions roamed Africa one century ago, but recent studies show that the species is extinct in 26 countries across the continent and occupies a fraction of its historical rangeland. With lion populations plummeting by a staggering 43 percent in just the last two decades, the King of the Jungle is now a vulnerable species on the IUCN Red List.Approximately 23,000 of this iconic big cat remain in the wild, although researchers warn that the estimate is optimistic — the actual figure being more likely between as low as 16,500 and not higher than 30,000. Over the last century, the species has been a victim of poaching, trophy hunting, and human-wildlife conflict. More recently, lion bone trade for use in traditional medicine and wine, as well as climate change are growing threats to its survival.

Extinct in North Africa and severely depleted in West and Central Africa, remaining populations could face a similar fate by 2050. The highest densities are found in the savannah woodland plains of eastern and southern Africa, but conservationists face complex issues when protecting lions across transboundary rangelands while also addressing the international demand for lion products.

The wildlife laws and trade regulations that help protect African wildlife vary in different countries on the continent. In Kenya, lions are largely restricted to protected areas and surrounding community conservation areas, where hunting is prohibited. Across the border in Tanzania, trophy hunting is permitted to an extent while in South Africa, the hunting of captive-bred wildlife has morphed into a lucrative industry.

While hunting revenues can provide financial resources for conservation, overexploitation results in unsustainable losses to species that cause long-term negative impacts on the hunted populations. In the last decade, over 6,000 lion skeletons were exported out of South Africa to Asia. Amounting to almost 70 tonnes, the skeletons were predominantly from captive-bred cats killed in canned-hunting game ranches.

In Ruaha National Park in Tanzania, which holds more than 10 percent of the world’s remaining lions, the big cats rely heavily on adjacent dispersal communal lands. In such areas, retaliatory or pre-emptive killing to protect humans and livestock, are driving down populations. To mitigate human-wildlife conflict in this protected area, African Wildlife Foundation works with local communities to fence off their livestock enclosures, reducing attacks on livestock by 60 percent. The killing of lions and other livestock predators such as wild dogs also declined by 80 percent.

While mitigating human-wildlife conflict and retaliatory killings will help the species recover, successful species protection involves maintaining multiple populations, called Lion Conservation Units, across the species’ range in various ecological settings. Lions are resilient predators and populations have been known to recover after disease, but habitat fragmentation can take a toll on their genetic health.

To collect critical information for adaptive lion conservation strategies, AWF has collared lions in Manyara Ranch to track the big cats’ movement and extent of home range in the wild. With the facilities to monitor disease, habitat use, and predator-prey interaction, conservationists can estimate populations and protect the species from further loss.