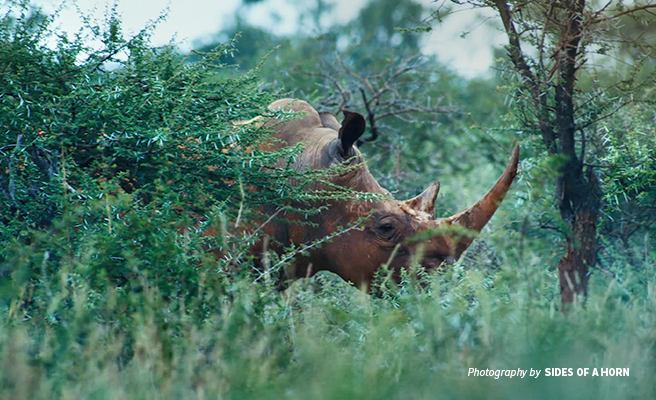 A new film highlights the plight of rhinos in Africa as it explores how two people from the same circumstances, community, and even the same family can end up on opposite sides of the war against poaching.Sides of a Horn's promoters say the short is based on real events. They filmed in the townships and reserves where people feel acutely the tensions and predicaments related to wildlife crime, the poaching and trafficking which, as writer and director Toby Wosskow says, “tears apart communities and is driving a prehistoric species to the verge of extinction.”

It portrays a scenario in which some people may choose, in the face of poverty, illness, and lack of opportunity, to profit from the illegal wildlife trade, while others choose to protect Africa’s natural heritage even at a tremendous personal cost.

When Wosskow traveled in South Africa in 2016, he was captivated by the beauty of the country’s wildlife reserves. “One afternoon, I was walking through the bush with a game ranger, when we stumbled across a white rhino peacefully grazing. What struck me more than the animal’s vicious beauty was that this scene could have been taking place 50 million years ago or today. I was looking at a living, breathing time machine in a land that time forgot.”

The magic of the moment took on new significance when Wosskow learned the extent to which rhinos were under attack, “that this magnificent creature was being massacred to the brink of extinction.”

Once back in the U.S., he started researching and found that, while there was a fair amount of international media coverage about the multi-billion-dollar illegal wildlife trade, nobody was talking much about the community members living near rhinos, the rangers who protect them, or those who had experience with the poaching trade. As a filmmaker, he felt the responsibility to expose the impact of the illegal wildlife trade and humanize the men and women affected. By painting an unbiased portrait, he wanted to change old, static narratives.

On World Rhino Day (Sept. 22, 2017), Wosskow launched a crowdfunding campaign to make his film. Some 235 individuals from 16 different countries contributed, wanting to bring Wosskow’s vision to life. Wosskow returned to South Africa, and with the support of local South African producers The Televisionaries and YKMD Productions, began shooting scenes against the backdrop of a national park and its neighboring township. He did local castings and was able to hire only actors who spoke Zulu (some of the small roles featured local people who are non-actors). The resulting 17-minute film follows three characters — a ranger, a poacher, and a rhino — as their paths collide.

Wosskow signed on Sir Richard Branson as executive producer. He previewed the film a year to the day after the Kickstarter launch, with screenings in Los Angeles and 10,000 miles away in Johannesburg. “To be able to do our first private screening exactly one year later on the following World Rhino Day is such a beautiful, full-circle moment,” Wosskow said.

At the Los Angeles screening, Wosskow led a wildlife crime panel discussion sponsored by African Wildlife Foundation and including AWF CEO Kaddu Sebunya. A similar discussion occurred in Johannesburg, led by the South African producers. “The reason we made Sides of a Horn was to inspire a greater conversation among global citizens that can lead to positive change,” Wosskow said. “I am pleased to be able to announce that the conversation starts now.”

AWF’s Council Chair Bobbie Ceiley met Wosskow — who has since become a Council member himself — during his travels and introduced him to the team at AWF. Sides of a Horn, she says, “is a powerful and thought-provoking film that will shed more light on the subject, not only in terms of conservation but also about the communities living around wildlife resources and the real impact on the ground. AWF is committed to working with communities on holistic anti-poaching solutions including the development of alternative livelihoods.

Wosskow will be holding more Sides of a Horn screenings with his eye especially set on schools and communities around rhino habitat in South Africa (where most African rhinos are located). Following the screenings, he is planning an international online release on June 3, 2019 at www.rhinomovie.com to inspire a greater conversation among global citizens.

“The human death toll is rising and the rhino is facing extinction within the next decade,” he says. “One strength of the short film medium is the ability to tell vital, urgent stories, and this story is as urgent as they come.”