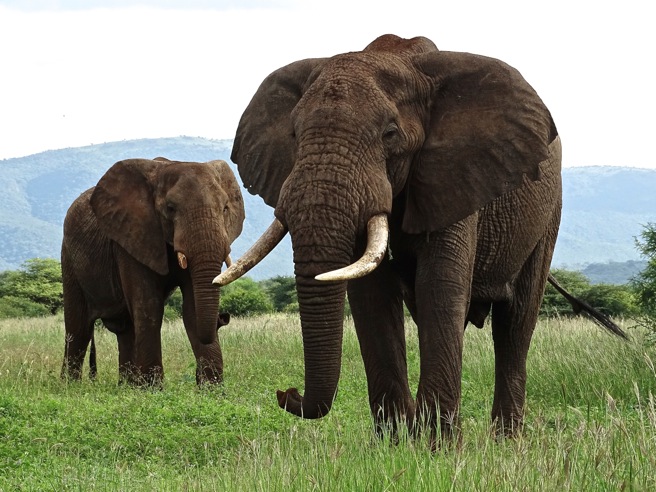 As many as 35,000 African elephants are killed by poachers every year. In the last five years, the elephant population in Tanzania—historically one of the great elephant range states—has declined by more than 60 percent. To the south, nearly half of Mozambique’s elephants have disappeared, again as a result of poaching. And in Central Africa, 65 percent of forest elephants have been killed in the span of a decade.

The elephant carnage in Africa is being driven by demand for ivory carvings and trinkets abroad, namely in China, Hong Kong, Thailand and the Philippines, but also in countries such as the United States. International trade in ivory has been banned since 1989, yet a black market enables the industry to persist, as ivory is smuggled under the table—or rather under tea leaves and other legal products stowed in shipping containers. As demand grows, it fuels the poaching on the ground.

The multi-billion dollar illegal wildlife trade draws in organized criminal syndicates that often traffic other "products," including people, drugs and arms. It draws in reasonably-armed non-state actors such as the Lord’s Resistance Army and Sudanese Janjaweed. It tempts the father of six living in a rural community with few job opportunities to turn to a life of poaching. It enriches the citified fat cat sitting in Dar es Salaam or Maputo who facilitates the deal with regional traffickers or contacts overseas. It corrupts some rangers and law enforcement officers, and endangers the rest. Its sole contribution is the decimation of species, the theft of a nation’s natural heritage and the erosion of the rule of law.

See what your state is doing to protect elephants

U.S. states and the slaughter

In spite of the international ban on commercial ivory trade, the domestic buying and selling of ivory continues, legally, in many countries, including the United States. Ivory traffickers exploit these loopholes and are well aware of the difficutly—for consumers and law enforcement—distinguishing legal ivory from ivory that has been illegally obtained.

During his recent visit to Kenya, U.S. President Barack Obama announced that the U.S. government has proposed a new rule that would prohibit most interstate commerce of African elephant ivory and severely restrict commercial exports. The federal ban would not, however, govern intrastate trade in ivory products. As such, ivory can still be bought and sold within the borders of Washington, Oregon, Massachusetts and other U.S. states, and ivory traffickers can still pedal their illicit wares under cover of the legal trade.

Reports on the U.S. ivory trade and arrests of ivory traffickers over the years indicate the United States is a prominent destination and transit country for illicit ivory. A report by the Natural Resources Defence Council estimated that 90 percent of ivory for sale in Los Angeles and 80 percent of commercially traded ivory items in San Francisco were illegal. In 2013, the U.S. government destroyed six tons of illegal ivory in Denver, Colorado. On June 19, 2015, it destroyed another one ton in New York City’s Times Square. The majority of the ivory crushed in Times Square was seized from a Philadelphia arts dealer currently serving a 30-month prison sentence following his conviction on ivory smuggling charges.

We are being watched

By far the largest ivory market in the world is in China. Short of reducing demand for ivory products in China to zero, a complete shut down of the country’s domestic ivory market would strike a game-changing blow to the illicit ivory trade. Conservation groups, individuals, and governments around the world have advocated for a full ban, and now there are indications that China will indeed phase out its ivory trade.  However, the Chinese government is also urging the United States and other countries to remove all legal ambiguities around ivory trade within their borders.

Said Meng Xianlin, a top representative with China’s CITES Management Authority, in an interview with the Washington Post: “Some people say, ‘China should take the leadership, you first, you stop everything and other countries will follow,’ ... I understand, but I think we should negotiate with other countries to push these procedures gradually.”

In an effort to encourage the country with the world’s largest ivory market to shut down its trade immediately and permanently, the United States—at the federal and state level—must lead by example. Three U.S. states—New York, New Jersey and California—have passed legislation banning intrastate ivory trade. New York was home to the largest ivory market in the United States, while New Jersey’s ports have served as entry points into the United States for smuggled ivory. California has been a major hub for the illegal ivory trade, with San Francisco and Los Angeles having the largest ivory markets with the highest proportion of illegal pieces, after New York. In 2014, New York’s State legislature amended an environmental law to permanently ban, with limited exemptions, the sale of elephant ivory, mammoth ivory and rhino horn. The bill also increased the penalties for those convicted of breaking the law. New Jersey also banned the sale of ivory and rhino horn, with no exemptions, in 2014. Most recently, California became the third U.S. state to ban intrastate trade in ivory and rhino horn when Governor Jerry Brown signed Assembly Bill 96 into law.

Other states that currently have ivory trade bans on the table include:

Delaware
Senator Karen Peterson and Representative Sean Lynn introduced Senate Bill 156, which would “prohibit a person from purchasing, selling, offering for sale, possessing with intent to sell, or importing with intent to sell ivory or rhinoceros horn, except as specified, and would make this prohibition enforceable by the Department of Natural Resources and Environmental Control.” On June 24,2015, the bill was assigned to the Senate Banking and Business Committee.  Read about SB156.

District of Columbia
In January 2014, a pair of elephant tusks presented to the District by Ethiopian Emperor Haile Selassie was stolen from the District’s John A. Wilson building. No arrests were made and the ivory has still not been recovered. Between 2007 and 2013, and between 2007 and 2012, ivory has been confiscated in Baltimore and at Dulles International Airport respectively. On June 16, 2015, Councilmember Mary Cheh introduced B21-0251, or the “Elephant Ivory and Rhinoceros Horn Trafficking Prohibition Act,” which would effectively “prohibit the import, sale, offer for sale, purchase, barter, or possession with intent to sell ivory and rhinoceros horns in the District.” The bill has since been referred to the Committee on Judiciary. Read about B21-025.

Illinois
On February 20, 2015, Senator Linda Holmes introduced SB1858, also called the Ivory Ban Act. SB1858 “provides that it shall be unlawful for any person to import, sell, offer for sale, purchase, barter, or possess with intent to sell, any ivory, ivory product, rhinoceros horn, or rhinoceros horn product” and “establishes penalties for violation of the Act.” Read about SB1858.

Massachusetts
On January 20, 2015, Senator Jason Lewis and Representative Lori Ehrlich introduced SB 440 and HB 1275, which would ban outright trade in ivory and rhino horn with limited exemptions. Bill H. 1275 has been referred to the Joint Committee on The Judiciary. Read HB1275.

Michigan
On June 4, 2015, Senator Steven Bieda introduced Senate Bill 0371 (same as House Bill 4509), effectively prohibiting “the sale, purchase, barter, or possession with intent to sell of ivory or rhinoceros horn or products thereof.” On the same day, the bill was referred to the Committee on Natural Resources. Before the Committee on Natural Resources. Read SB 371.

Vermont
Sponsored by Representatives Kurt Wright and Joan Lenes, H.297, a bi-partisan bill, was introduced on February 24, 2015. If passed, H.297 would ban the import, sale, offer for sale, purchase, barter, or possession with intent to sell of any ivory, ivory product, rhino horn, or rhino horn product. H.297 has been referred to the Committee on Fish, Wildlife & Water Resources. Read about H.297.

In lieu of a bill, states that have mobilized to force a ballot initiative include:

Washington
On April 3, 2015, a campaign was launched to gather enough signatures from Washington residents to force a vote at the polls on Initiative 1401 (I-1401) during the November election. The first-of-its-kind initiative would criminalize trafficking in 10 endangered species and their parts, including elephants and their ivory, rhinos and their horn. Previously, in January 2015, HB 1131 was introduced, sponsored by Representatives Eric Pettigrew, Vincent Buys, and Joe Fitzgibbon, to impose strict regulations on trade in ivory and rhino horn products in the state. The new state initiative, I-1401, goes further than HB 1131 in banning trade in 10 endangered species and their parts. As of July 1, 2015, a total of 348,627 signatures had signed the petition to get I-1401 on the November ballot. Washington residents can follow developments with regard to the initiative.

States where introduced bills did not advance: