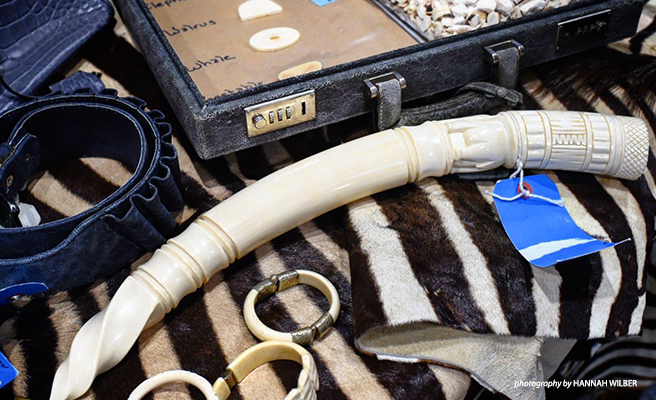 Valued at an estimated $10–$20 billion per year, the global illegal wildlife trade is said to be the fourth-largest illegal trade in the world. To date, much attention has been focused on consumer countries in Asia, a major destination for a wide variety of wildlife contraband.

But what many people may not realize is that the United States is one of the largest demand markets for ivory and other illegal wildlife products. A recent study found that 80 percent of Americans consider themselves animal lovers and support wildlife conservation measures. At the same time, however, it found 80 percent of Americans aren’t aware of the illegal wildlife trade in their own country.

The study was supported by the U.S. Wildlife Trafficking Alliance, of which AWF is a founding member. The Alliance aims to shrink that knowledge gap, bringing together nonprofits, government and industry leaders—such as eBay, Google, JetBlue and Tiffany & Co.—that have tremendous influence over consumer behavior.

Because of its Alliance membership, AWF had the privilege of meeting with special agents from the U.S. Fish and Wildlife Service (USFWS) Office of Law Enforcement in early December. The exchange underscored similarities in the strategies implemented and challenges faced by both USWFS and AWF in the fight to disrupt wildlife trafficking networks. It also illuminated the need for greater public support on the issue.

Each year, the Office of Law Enforcement deploys wildlife inspectors to ports throughout the United States to monitor goods arriving from around the world in travelers’ luggage and cargo shipments. Some 124 agents inspected 193,971 shipments in 2015 alone, with the majority of inspections carried out at designated ports through which legal wildlife products can pass. According to the agents, the number of inspections conducted just scratches the surface of the total volume of shipments that pass through.

To root out illegal wildlife products in all this cargo, USFWS employs some of the same approaches as AWF and its partners in Africa. Through our Canines for Conservation Program, for example, AWF has deployed sniffer dogs to major ports—and known trafficking hubs—in Kenya, Tanzania and Uganda. The detection units have enhanced the effectiveness of cargo and luggage inspection significantly. Notably, teams based at Jomo Kenyatta International Airport in Nairobi, Kenya, made 37 finds in the nine-month period from January through September 2016. The dogs even sniffed out contraband—including live tortoises—that they hadn’t been trained to detect.

Similar to AWF, the USFWS launched a detection dog program in 2014 to sniff out wildlife contraband at the ports of Chicago, Miami and Los Angeles. By targeting specific ports, USFWS Office of Law Enforcement inspection agents concentrate their efforts where they are needed most.

Agents also tailor their inspection approaches to each port. At ports with direct flights to Africa, agents are more likely to find elephant ivory concealed as “handicrafts” or “toys.” At ports with flights coming from Asia, however, wildlife products like rhino horn are more often disguised as medicines or cosmetics.

Detecting wildlife contraband is a challenge, but it’s not the only one in this process: Navigating the judicial system offers its own brand of hurdles. The agents spend anywhere from six months to a year building their case against a trafficker or network, usually while juggling as many as 10 other cases. Despite all this effort, prosecutors and judges don’t often give these cases much attention, perceiving wildlife trafficking as a lower-priority issue than other kinds of criminal cases.

Finding an angle that appeals to a prosecutor can make all the difference. Details like the intended use of the contraband or the amount of time a trafficker has actively traded wildlife can help escalate the perceived importance of a case. In many instances, traffickers have committed other crimes in the course of their illegal wildlife trade operations, and USFWS agents highlight those crimes to get prosecutors’ attention.

AWF is all too familiar with the uphill battle of getting those in the law enforcement community to view wildlife trafficking as the serious crime it is. We’ve seen this play out in the trials of alleged poachers across the African continent. That’s why AWF began leading judicial and prosecutorial trainings. Since 2015, we’ve conducted workshops in nine African countries, providing training to more than 600 members of law enforcement.

The trainings have paid off. In March, a Kenyan court imposed a fine of more than $19,000 on a traveler smuggling pangolin scales through Nairobi’s main airport. (The scales had been discovered by an AWF-trained detection dog unit.) And in Ethiopia, a prosecutor—who had attended an AWF training—requested imprisonment in a case concerning two smugglers found with 86 kg of ivory. Considering the act as a grave offense, the court sentenced each criminal to three years in prison.

While AWF, USFWS and others are working hard to stop the trafficking of illegal wildlife products, public outcry against the illicit trade is what will ultimately tip the scales, and the legal system, in wildlife’s favor.

Two years later, the U.S. Congress introduced the Eliminate, Neutralize, and Disrupt (END) Wildlife Trafficking Act, which aimed to foster a collaborative, interagency approach to disrupting regional and global networks of wildlife traffickers. Through an online AWF advocacy effort, nearly 30,000 AWF supporters wrote to their U.S. Senators, asking them to vote in favor of the proposed legislation. The result: The END Act was unanimously passed by the Senate and then the House in September 2016. It was officially signed into law in early October.

It’s certainly encouraging to see the United States starting to get its own house in order. But, as the conversations with the USWFS agents made clear, there is still a long way to go, especially when so few recognize the scope of the problem.

Whether providing technical expertise on strategy, financially supporting initiatives such as the U.S. ivory burn or helping supporters urge their elected officials to take action, AWF will, as we have before, keep pushing to make wildlife crime a priority issue.