Ground up. Hidden in coffee. Disguised. There is no limit to the tactics wildlife traffickers will use when they are attempting to sneak through wildlife contraband. But there is no fooling a dog’s nose. No matter how hard smugglers try to hide their contraband, African Wildlife Foundation’s highly trained canine detection dogs will sniff out wildlife products. In fact, it takes only 10-12 seconds for one dog to inspect a vehicle and signal to their handler where the contraband is concealed.

“If you don’t have a dog, you’re going to have to get out your toolbox,” jokes Will Powell, AWF Director of Canines for Conservation. He runs an intensive canine and handler training program in Usa River, Tanzania, pairing wildlife authority officers with a canine counterpart and training the teams to detect wildlife contraband. With the support of the Bureau of U.S. International Narcotics and Law Enforcement Affairs, African Wildlife Foundation has helped train wildlife rangers from Kenya, Tanzania, Uganda, Cameroon, and Botswana. The fully equipped canine units are deployed strategically at exit and entry points to intercept traffickers smuggling illegal wildlife products — elephant ivory, rhino horn, pangolin scales, and hippo teeth are commonly seized.

For Powell, the 43 sniffer dogs his team has trained as wildlife detection dogs are just as much wildlife officers as the rangers who handle them. Speaking at the graduation ceremony of Uganda Wildlife Authority rangers who completed their course at the Canine Training Facility in February 2020, he explains that the program is designed for teams to “understand how we can connect with our four-legged colleagues.”

Some of the newly trained handlers will return to Entebbe International Airport, where they have already been assisting the canine unit that graduated from AWF’s program in 2016. A separate group of detection dogs and handlers will be deployed to western Uganda, where, with support from the Giorgi Foundation, AWF has constructed a canine facility at Karuma station in the wider Murchison Falls National Park. According to Uganda Wildlife Authority’s Deputy Director of Field Operations, Charles Tumwesigye, the north-western region harbors trafficking routes for wildlife contraband smuggled across the Democratic Republic of Congo border and, increasingly, from South Sudan. “The converging point is Karuma,” he says, so the Karuma canine unit must sniff out culprits in this trafficking zone before they proceed. 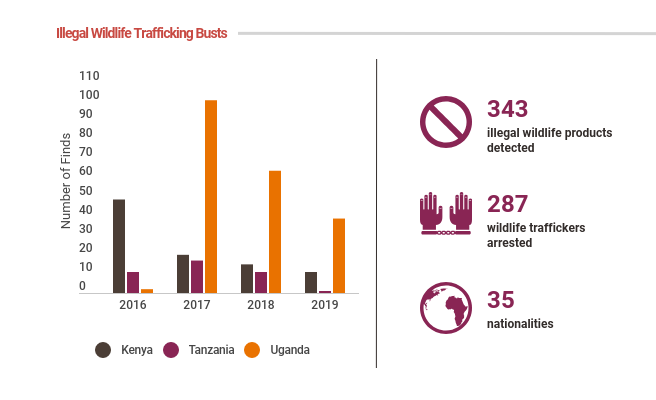 With the addition of the new detection dogs and handler team, Uganda’s canine unit is the largest group trained by AWF. When the first team was deployed in November 2016, they initially intercepted illegal wildlife products just twice in the ensuing weeks, but the number of finds soared to 101 in the next year. The busts have been steadily declining since the initial surge, which is to be expected — traffickers avoid exit points where they are likely to be caught. This is why governments are eager to work with AWF to deploy these trained canine detection teams to their trafficking hotspots. Just the presence of the Uganda Wildlife Authority canine unit in Entebbe is enough to scare off criminals, says Powell. “They’ve learned: the dogs are there.”

Apart from acting as a deterrent where they are deployed, the canine units must collaborate with other authorities to reduce the trade of illegal wildlife products across the East African region. Tumwesigye lauds the state-of-the-art canine facilities at Entebbe International Airport: “It has made a very big difference in the way we work.” He notes that stopping traffickers is crucial, but it is equally important to ensure that the investigation and prosecution of these offenders are streamlined.

The complex network of illegal wildlife trade crosses international borders, linking criminal syndicates overseas with local actors — some might be tempted to kill wildlife while others might aid traffickers to slip through the cracks. Without coordinated action to counter this dynamic and dangerous industry, the future of Africa’s iconic species is uncertain. As a wildlife-rich country, Uganda might be a source of the illicit items, but many of the products are intercepted en route from neighboring countries and destined for overseas markets. 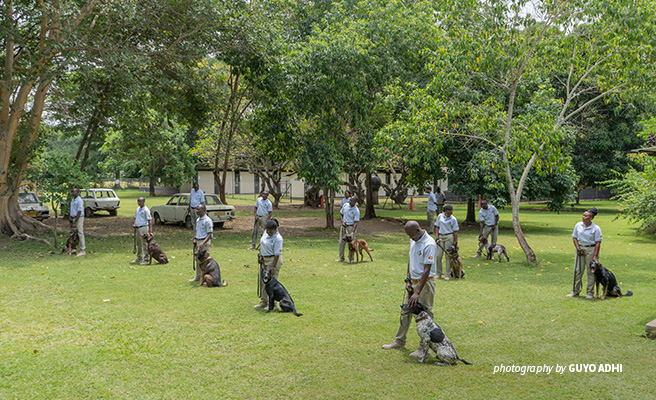 Being a transit country and regional trafficking hotspot, sealing its borders and strengthening wildlife crime frameworks is a priority. In February 2020, Uganda launched the National Wildlife Crime Coordination Taskforce to improve information-sharing and interagency operations in the fight against illegal wildlife trade.

According to Tanzania Wildlife Authority’s John Kaaya, who oversees the national agency’s canine units, it is important for Kenya, Tanzania, and Uganda to combine forces and protect their shared ecosystems. He underscores the value of the high-quality certification that all AWF-trained canine units receive at Usa River before they are deployed to different trafficking zones across the continent: “With similar training, they will all have the same understanding of how to combat illegal wildlife trade.” AWF is committed to embedding canine units within wildlife agencies and has worked with governments to develop 5-year strategies for the canine units in Kenya, Tanzania, Uganda, and Botswana.

The intensive hands-on training at Usa River is only the beginning. Now that the rangers are equipped with the skills and knowledge to look after their dogs and advance the detection capacity of their anti-trafficking teams, AWF will continue to integrate their crucial role into wildlife law enforcement. A newly trained Uganda Wildlife Authority handler recognizes the gravity of this responsibility. Speaking on behalf of his graduating class, he thanked AWF for introducing them to their four-legged companions and providing international canine training that they can apply in different countries across the region to safeguard species targeted by illegal wildlife trade. “You have given us friends,” he says proudly. “Our dogs are an important tool in our work, but we can communicate and enjoy together as we fight against wildlife trafficking.”

> Learn how AWF works with Ugandan canine handlers, prosecutors, and investigators to streamline wildlife law enforcement in the country