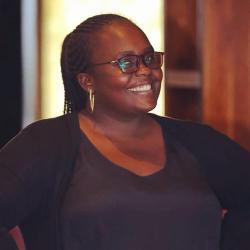 At the foot of the chilly Volcanoes National Park lies Kinigi, a vibrant, emergent town that welcomes guests from across the world year-round to visit the astounding spectacle of nature that Rwanda has to offer, its mountain gorillas.

In September every year, the town plays host to one of the biggest events in the Rwanda calendar – Kwita Izina. The annual gorilla naming ceremony is modeled on the centuries-old tradition in which Rwandans name their children in the presence of family and friends. In 2005, Rwanda began officially naming mountain gorillas in what has become a global celebration of nature and conservation success. By giving a name to these majestic great apes — once critically endangered — a value is attached, one they undoubtedly deserve.

The ceremony has proven to be the best opportunity to thank the communities that live around Volcanoes National Park, research partners, veterinarians, dedicated conservationists, rangers, and trackers who protect the gorillas. Over the last 18 years, 374 mountain gorillas have been named.

This was the second time an AWF CEO was given the opportunity to name a baby mountain gorilla at the prestigious global event. In 2008, AWF’s former CEO Patrick Bergin had the honor of naming one of the newborn gorillas. He called her “Sacola,” in honor of the AWF partner, the SACOLA community trust, which owns Sabyinyo Silverback Lodge. AWF developed the partnership between the community and a private-sector operator to construct the lodge, which opened in 2007. The lodge is based on gorilla tourism and promotes wildlife protection by linking conservation to jobs and other benefits to community members.

Other members of the AWF family who have also received the honor of naming a gorilla include former AWF board member Veronica Varekova, who in 2017 chose the name “Ubwiza” (which means “beauty”), and in 2018, Alexa Gray, the daughter of board member Donald Gray, named a baby gorilla “Kunesha” (which means “to win”).

The baby gorilla that Sebunya named is a female baby gorilla, born on September 13, 2021 from the Mutobo family to its mother Igitangaza. The name he gave her is Indatezuka, which means “resilient”. This name was chosen to highlight the importance of collective responsibility in ensuring successful conservation efforts.

In his message while presenting the chosen name, Sebunya reflected, “I am overcome with emotions when I remember that there are only two other people I have ever named in my life and those are my children. I therefore now consider Indatezuka a third-born daughter in my family and the newest member of the AWF family. We warmly welcome her. In her honor, we hope to be able to remain resilient as an African conservation organization in ensuring that we safeguard her future and that of other gorillas and wildlife on the continent.”

Additionally, in attribution to the growing population of mountain gorillas and the nature of conservation in Africa — which are both persistently resilient — we hope that this name will be the source of inspiration for the upcoming generation of conservationists to remain steadfast in the pursuit for African conservation success.

In recognition of AWF’s long standing relationship with the Government of Rwanda, AWF remains committed to supporting the Rwanda Development Board to deliver a 10-year park expansion program. The Kwita Izina annual celebration is a testament what conservation success looks like when communities and wildlife live in tandem.

> Learn why AWF supports the expansion of Volcanoes National Park