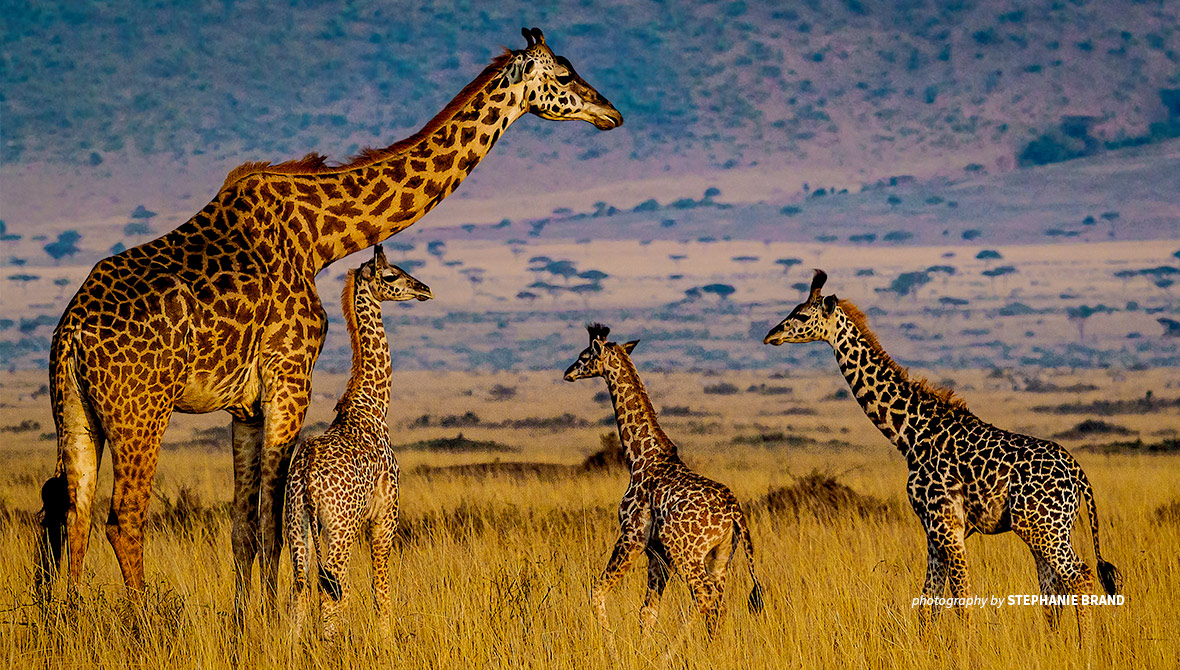 Consider the giraffe. From afar, they can be difficult to fathom. But take some time to think about them, about their size. A giraffe’s heart weighs 25 pounds and is two feet long. Their lungs hold 12 gallons of air. Their legs and neck are each six feet long. Their feet are six inches across, the size of dinner plates. A mature adult can weigh 3,000 pounds. They are 18 feet tall — the tallest land animal. Which makes their ongoing disappearance all the more startling. In just 30 years the number of giraffes has decreased by 40 percent. It is estimated that for every four elephants left in Africa, there is one giraffe.

The animal is undergoing a multitude of threats pushing its population numbers lower in what scientists are calling a “silent extinction.” Some of the threats are those common to the plight of many African wildlife species: habitat destruction and fragmentation, civil unrest and violence, drought and climate change, unsustainable bushmeat hunting, and poaching.

But one of the biggest dangers to giraffes is how poorly the threats against them are understood. There is surprisingly little research on giraffes and a large amount of mystery. And while mystery may seem fitting for a creature of such unusual proportions, African Wildlife Foundation is studying the research and unraveling the mystery to better understand the species and conserve giraffe habitat.

What is going on with giraffes’ skin?

Fifteen years ago, scientists recorded a skin disease causing lesions across the necks and legs of giraffes in a single population in Uganda. The disease has now been recorded in 13 populations in seven countries, according to a 2019 study published in The Journal of Wildlife Diseases. Using camera traps, researchers diagnosed the severity of the infections and noted that most of the cases were only mild to moderate. But they did find serious infections and observed that affected giraffes moved with difficulty, raising concerns the giraffes would be more vulnerable to predators. Not much more is known about the disease, leaving important questions unanswered about how it spreads or what the long-term effects might be. 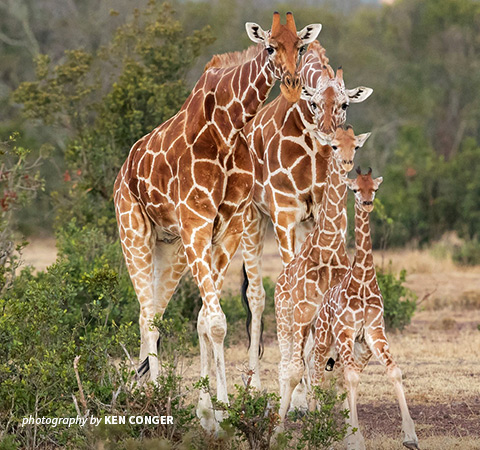 Giraffe conservation efforts depend on detailed studies of the curious mammal

Do giraffes and people get along?

Giraffes and humans frequently share spaces, especially as the growing human population pushes people further out into wild lands. Typically, the relationships between the two are peaceful; giraffes are genial creatures and are not prone to wreaking havoc with farms or livestock.

But a study published in the Journal of Animal Ecology in 2020 found that humans do impact giraffes. Close proximity to human populations has led to weaker relationships and increased isolation among giraffes. These relationships affect how animals feed, defend themselves, raise their young, and respond to environmental changes — all vital factors for species survival and sustaining genetic diversity.

How many giraffe species are there?

In 2016, a study was published in the journal Current Biology, arguing that there was not just one species of giraffe, as had been the long-held belief. Rather, there were four distinct species. The study gained some notoriety, but it was hardly the first entry in the debate. Over the years, giraffes have been grouped into one, two, three, four, or six species depending on the accounting of genetic markers and geographic regions. It may all seem pedantic, but the particulars matter when it comes to protective efforts designed to conserve individual species.

Sticking our neck out for giraffes

There is a lot still left to learn about giraffes — their level of cognition, their means of communication, even their propensity to attract lightning — but identifying these mysteries is only part of the equation. These discoveries illuminate the unique conservation needs that must be met to sustain giraffe populations, and that is where AWF comes in. By studying research developments and doing our own groundwork, we can implement the best possible conservation plans and identify any gaps in existing measures.

On the ground in Kenya’s Tsavo landscape, AWF’s Species Conservation Assistant Amos Muthiuri monitors giraffe populations. “When we started the giraffe project in Tsavo, our two main objectives were to identify the distribution of giraffes within the parks and ranches and to map out the threats in order to propose measures to secure populations and their habitats,” Muthiuri says.

And that is what we are doing in the Tsavo landscape, and across the continent. AWF teams are mapping threats like poaching, habitat loss, and blocked movement corridors. Once the threats are mapped, we can implement solutions: securing giraffe habitats, improving management of protected areas, and inspiring community support of giraffe conservation.

A giraffe is a magnificent creature. At birth they drop six feet to the earth, but they can stand in half an hour and run in 10 hours. They assist in pollination, transferring pollen that adheres to their necks and heads between the treetops of the savanna. Their spots act not only as camouflage but help to dissipate the heat of the savanna sun. The more we learn about giraffes, the better able we are to protect them.