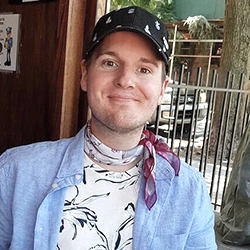 Brett Nolan is African Wildlife Foundation's Social Media Manager. He creates content strategies to entertain, educate, and empower global audiences so they can support African conservation. After completing his BS in Communications with a concentration in Journalism at Salem State University, he ... More

The African wild dog is a very unique and iconic African species best known for its colorful coat, which has earned it the name "African painted dog." What makes this species truly special though is more than just fur-deep. African wild dogs are social creatures that live in close-knit packs made up of anywhere between seven and 40 individuals. They live in a relatively peaceful social hierarchy with a dominant pair at the top. Traits often prized in domestic dogs, such as intelligence and sociability, are also found in their wild counterparts. Wild dogs are highly cooperative. Every pack member has a role to play in hunting, raising pups, and caring for sick and injured members. Despite these commonalities with our pets, wild dogs should remain in the wild as their name suggests.

Lions and other large carnivores might be more well known for their hunting prowess than wild dogs, but the painted canid is probably the most efficient hunter. They cover more than 12 miles of land per day while on the hunt. This, unfortunately, makes them highly vulnerable to traps, like snares, left by poachers. Unsustainable development is fragmenting their habitat. Being at such close proximity to people increases the risk of conflict with humans. These threats along with endemic disease outbreaks have driven down their population. The African wild dog has been endangered for more than two decades. Today, only about 6,600 individuals remain in the wild.

African Wildlife Foundation is working diligently to protect these colorful carnivores. We help local farmers build enclosures to protect their livestock from predators. We also track pack movements to anticipate where and when packs may run into people. These efforts have helped reduce conflict between humans and wild dogs so they can peacefully coexist.