Olivia Mufute is African Wildlife Foundation’s Country Director, Zimbabwe. She is responsible for oversight and management of AWF’s activities in the country, working closely with the Government of Zimbabwe as well as local communities, civil society organizations, and development partners. S ... More

By the time the rains had failed yet again in October 2019, more than 100 elephants had already succumbed to the southern drought in Zimbabwe alone. One of the harshest dry periods experienced in the region in the last four decades, the extended drought disappeared water sources across shrinking grazing areas. Wildlife mortalities continued to rise in Zimbabwe’s iconic protected areas, most notably in Hwange and Mana Pools National Parks.

With the Zambezi River flowing at its lowest level since 1995, the mighty Victoria Falls had reduced to a stream by November. The influx of tourists to Zimbabwe’s magnificent attractions too dwindled. By the end of the year, thunderstorms and heavy rains brought some respite but the horror will likely strike again soon. In recent years, climate in the region has been mostly characterized by high rainfall variability, rising temperatures, and shifting rainfall patterns. The harsh conditions have significantly affected the availability of water and other resources for both humans and wildlife.

Across southern Africa, frequent and recurrent droughts in the past three decades have given rise to food insecurity for millions of people, as well as power cuts and water shortages. The resulting economic downturn is felt for years to come. The region has also experienced short-term extreme meteorological events like early 2019’s tropical cyclones that displaced nearly 400,000 people across Mozambique, Malawi, and Zimbabwe. The deluge caused fatal landslides, sweeping away homes and killing more than 340 people in Zimbabwe; some families are still looking for missing members. According to Oxfam’s November 2019 briefing paper, 348 cattle, 17,000 chickens, and 222 goats and sheep were reported lost, in addition to the acres of farmland and cereal in storage destroyed by the torrential rain and high-speed winds.

Widespread shortages of food and water across these areas bring various serious health risks to already marginalised people. Apart from malnutrition, epidemic outbreaks of diseases like malaria and cholera are also more likely post flooding events. According to “The Global Climate in 2015-2019” report by the World Meteorological Organization, some of the largest cholera outbreaks in the last few years have been triggered by unsanitary living conditions during severe floods. In the face of the COVID-19 pandemic which has overturned global economies irrevocably and caused nearly 400,000 deaths across the world as of early June 2020, experts have called for a complete shift in our relationship to the natural world. They warn that this devastating new disease will not be the last to pass between animals and humans.

In light of this global health and economic crisis, the United Nations Environment Programme on World Environment Day 2020 urges for the conservation of wild habitats to minimize animal-human interaction and the reduce spread of zoonotic diseases like COVID-19. Already, communities in rural Zimbabwe suffer increased wildlife intrusions during prolonged low-rainfall seasons, especially where they live near protected areas. 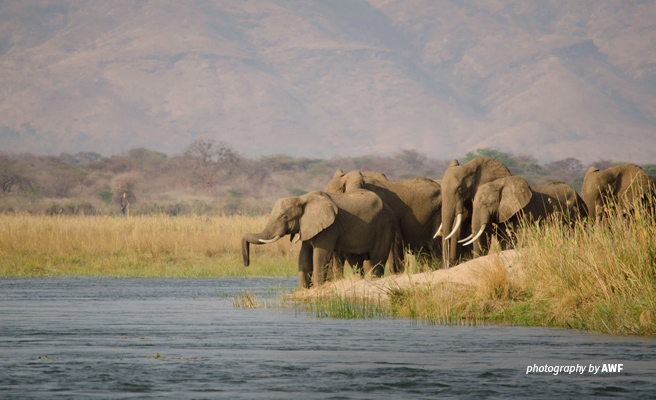 As natural water holes and pans in national parks and reserves dry out during droughts, starving wildlife are forced to travel very long distances in search of food and water, and breach communal areas where people are also struggling with food shortages. In Zimbabwe, human-wildlife conflict cases commonly involve large water-dependent species like elephants and hippos, but villages are increasingly vulnerable to attacks by lions, hyenas, and African wild dogs. Hungry elephants can destroy an entire harvest in minutes; encounters with wildlife can result in injury and death. Although retaliatory killing is dangerous, it is sometimes the community’s only defense against raiding wildlife.

At the height of the recent drought, African Wildlife Foundation delivered hay to provide emergency support for wildlife in Mana Pools National Park. Whilst suitable as an urgent measure for hungry wildlife, hay lacks the necessary nutrients to sustain species for extended periods. With more frequent droughts projected in Zimbabwe, competition for food and water among people and wildlife will continue to escalate and it is imperative to embrace longer-term measures.

AWF works closely with government institutions and development partners to create landscape-wide solutions that buffer both communities and wildlife populations from weather-related stresses. In Mana Pools National Park, we support the Zimbabwe Parks and Wildlife Management Authority (or Zimparks) to look after a critical elephant population in the Lower Zambezi Valley landscape. In addition to managing a robust anti-poaching team and installing a digital radio communication network, we have constructed a river-based reaction unit to boost communication across all ranger bases. AWF has strengthened conservation operations for Mana Pools National Park rangers with the building of an operations room and staff housing, and also providing uniforms, patrol rations, fuel, and vehicles. Our refresher training sessions for rangers and wildlife officers include data collection and management, team building, and leadership.

Collaborating with Zimparks, AWF has supported the development of General Management Plans to for both Mana Pools and Hwange National Parks. In the latter, which is Zimbabwe’s largest natural reserve, we supported painted dog and lion research and conducted crocodile and hippo surveys along the Middle Zambezi. In 2014, we contributed to the transboundary elephant census in this critical landscape and we are now funding the development of the Mid-Zambezi Valley Anti-poaching Strategy (2019-2023) implemented by Zimparks and other law enforcement agencies. 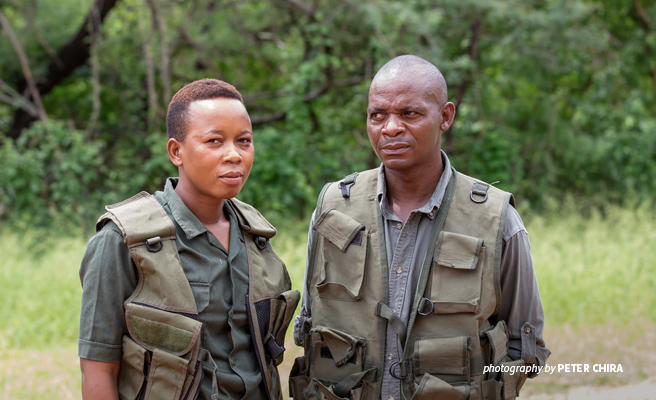 Apart from building the wildlife management capacity of Zimbabwe’s national parks and reserves, AWF also works toward safeguarding wildlife corridors. These are areas where wildlife travel when they move between protected areas — often coming in contact with human settlements and farmlands — and are critically important in maintaining connectivity between wildlife habitats across the country.

Our conservation solutions help people benefit from protecting natural resources and safeguarding wildlife. In northern Zimbabwe’s Lower Zambezi landscape, we are helping villagers in Mbire district, to develop tactics against human-wildlife conflict. So far, we have introduced chili farming as a means to deter crop-raiding elephants — farmers repel them by burning pungent chili-infused briquettes or placing chili barriers along farm boundaries. The crop also serves as an additional income source.

The communal lands in Mbire encompass important wildlife corridors, being adjacent to the Mana Pools National Park, which is part of a wider nature reserve with U.N. Educational, Scientific and Cultural Organisation World Heritage Site status. AWF is working with local authorities here to develop a Land Use Plan that ensures more land is devoted to conservation. An important element in this sustainable land-use strategy is the creation of a communal wildlife conservancy managed by local communities. This way, people in Mbire will live in greater harmony with wildlife while also gaining an alternative, conservation-friendly livelihood asset. Already, we help train community wildlife scouts, who play an important role as the first responders in human-wildlife conflict cases and also conduct anti-poaching patrols.

At the heart of AWF’s commitment to African-led conservation is the belief that community resilience grows through nature-friendly livelihood options that alleviate poverty. As Zimbabwe braces itself for increasing rainfall deficits and chronic food insecurity, it is time for a new approach that safeguards people, wildlife, and wild lands.