The two eminent leaders join the wide array of international experts and thought leaders on the AWF board, including other former African heads of state: H. E. Festus Mogae of Botswana, the late H. E. Benjamin Mkapa of Tanzania, and the late H.E. Ketumile Masire of Botswana.

H.E. Issoufou Mahamadou and H.E. Hailemariam Desalegn aim to work alongside their peers to ensure that wildlife and wild lands thrive in a modern Africa to support AWF’s firm recognition of the central role that conservation plays in Africa’s aspirations, especially in building back better from the economic impacts of COVID-19. The new board trustees believe that the recovery path chosen by African leaders must be underpinned by a commitment to securing the continent’s natural infrastructure to provide a strong base for resilient and prosperous nations.

Speaking in a video announcement to newsrooms on December 16, 2021, AWF CEO, Kaddu Sebunya expressed, “As an African organization in these uncertain times, we recognize the important role that the African voice plays in ensuring that the continent’s development is hinged on its people and its natural asset base. At AWF, we believe that Africa right now stands at a crossroads; that the decisions that leaders in Africa take now will have enduring impacts on people.

We trust that the elevated status of biodiversity will influence the opportunities available to Africans today and into the future. It is in this respect that we sought the support of African leaders in championing a new narrative for conservation in Africa.” 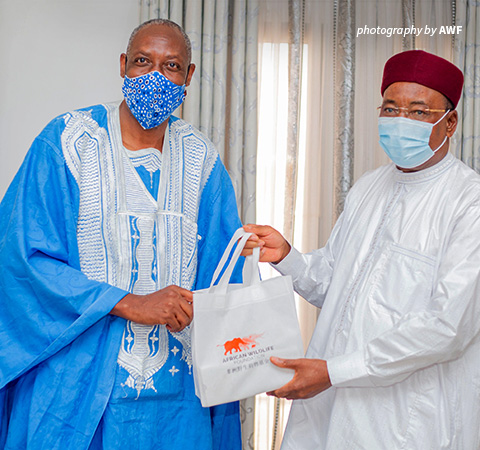 AWF CEO Kaddu Sebunya and H.E. Mahamadou Issoufou during a visit to Niger in May 2021

The two former heads of state bring outstanding experience from their previous leadership roles and current capacities as chairpersons of their foundations. In Niger, H.E. Issoufou has already recorded substantial progress in combating the impact of climate change and biodiversity loss in the Sahel region, both during his presidency from 2011-2021 and through The Issoufou Mahamadou Foundation.

His support for the Great Green Wall initiative and the successful launch of the Africa Continental Free Trade Area (AfCTA) are some of the key distinctions that led to him receiving the 2020 Mo Ibrahim African Leadership Award.

The Great Green Wall is positioned to rebuild a green belt of forest across the Saharan desert range states, with the idea being to hold back the growing Saharan desert and create a lush ecosystem. AWF believes that Africa needs more bold initiatives like this to give us a fair chance to reverse biodiversity loss.

In a statement H.E. Issoufou announced, “I am very excited to be joining the AWF board to further ensure that Africa shapes its own conservation and climate agenda that will secure prosperity for African nations and communities. Planning and managing resource use in an integrated way to deliver on people’s needs, development aspirations, and conservation imperatives requires a landscape approach.

We see the power of this landscape approach in our work to revive the Great Green Wall, which is transforming lives across the Sahel as well as restoring ecosystems. Working alongside the African Wildlife Foundation, we will be able to achieve enormous milestones that will shape the future of Africa.”

Similarly, in Ethiopia, H.E. Hailemariam, who served as Prime Minister from 2012-2018, is supporting select national parks in the country’s most remote landscapes. Through the Hailemariam and Roman Foundation, he is transforming the tourism and conservation sector by creating alternative livelihoods for the surrounding communities. 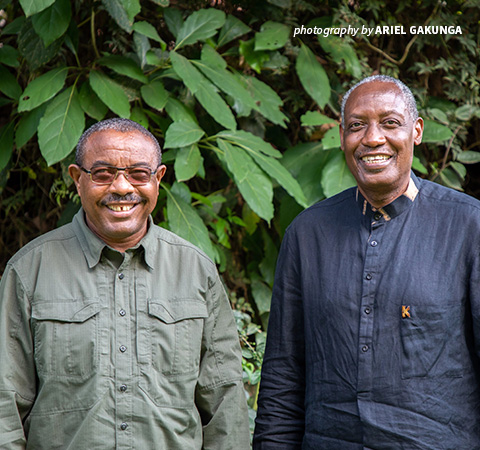 H.E. Hailemariam Desalegn and AWF CEO Kaddu Sebunya during a visit to AWF headquarters in November 2021

In adherence to his guiding principles of putting community at the center, creating sustainable and scalable models, catalyzing development interventions, and enhancing partnerships, H.E. Hailemariam’s never-ending passion for conservation success, pan-Africanism, and sustainable development has set him above the curve amongst his peers.

In his statement, H.E. Hailemariam remarked, “I am thrilled to become a member of the African conservation movement through the African Wildlife Foundation. Having led an African country for 6 years, I understand the key issues that we face as a continent and have consistently stated in multiple global forums that what needs to change is our behavior and our mindset.

We live at a time where there are numerous discussions around green growth investments and how they are shaping global negotiations to mobilize private finance through nature-based solutions linked to biodiversity and climate action. Understanding the intricacies of these global policies and the key role Africa plays is vital in ensuring that we do not set ourselves up for failure. Through AWF, I believe, we will be able to achieve this and so much more.”

In the context of COVID-19 and the growing impact of climate change, African countries will therefore need to build back better with a focus on diversified and resilient economies.

It is because of this shift, and the influence held by H.E. Issoufou, H.E. Hailemariam, and other African leaders, that AWF is convinced that we are set on the right course to shape Africa’s economic development as a model for the rest of the world where conservation is at the center of development.