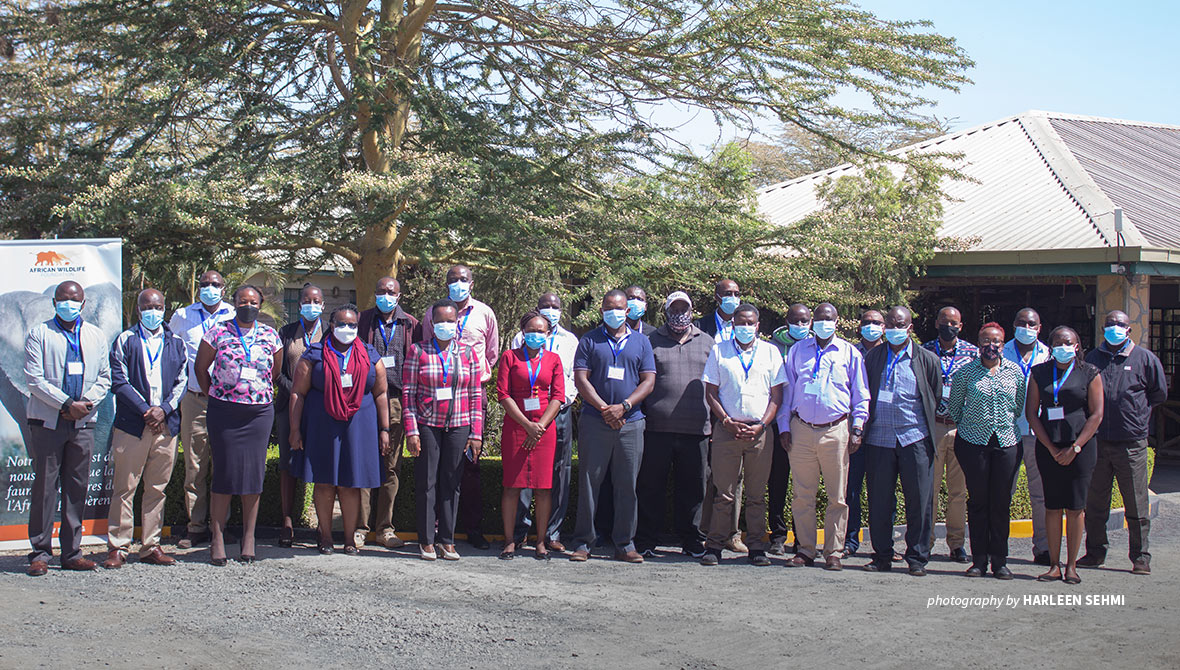 Establishing formal standards and guidelines for evidence security and storage at KWS facilities ensures that items collected from wildlife crime scenes preserve their probative value during investigation and prosecution. “Frontline rangers, investigators, and evidence custodians collect, handle, and store different kinds of evidence in wildlife crimes. To admit the evidence and to prevent contamination where forensic tests are required to be carried out on the evidence, it is important that the evidence is properly handled from the time it is recovered until the final disposal of the case,” explained Didi Wamukoya, AWF Director, Counter Wildlife Trafficking and KWS Honorary Warden.

An AWF-supported KWS evidence storage facilities survey in three key conservation areas found that existing evidence storage rooms present significant security shortfalls, logistical challenges, and health risks. For example, wildlife crime evidence is stored in the armory or in offices and miscellaneous stores at some stations rather than in dedicated and secured evidence rooms with freezers for perishable items, worktops, and cages for live animals or space for bulky items like motorbikes.

Opening the writeshop at Maanzoni Lodge in Machakos, KWS Deputy Director, Security Nancy Kabete elaborated on the benefits of developing official standards for the storage and disposal of wildlife crime evidence, which comprises a diverse range of items from slaughtered wildlife and animal parts to illegal sandalwood consignments. “The integrity of the evidence contributes a lot to how the case will be determined,” she said, adding that this credibility upholds the values of KWS. “If you [are] able to account for the chain of custody, you can trace back how the exhibit was handled and the procedures the institution is following.”

The writeshop commenced with presentations by AWF legal and wildlife cybercrime experts as well as KWS investigators and prosecutors. AWF facilitated group-based deliberations on key procedures, necessary equipment, and staffing needs to improve evidence security and disposal. The guidelines also cover the destruction and stockpiling of wildlife trophy exhibits such as elephant tusks and rhino horns. “The disposal of evidence has to be carried out in a legal and ethical manner to avoid such wildlife products being recycled back into the black market,” noted Wamukoya. AWF also provided a detailed review of Kenya’s legislation, policies, and procedures on disposal exhibits as a reference document.

By the final day of the writeshop, the participants had produced a first draft of the guidelines based on the various legal, logistical, and policy considerations discussed. After multiple stakeholders within the wildlife authority review the document, the guidelines will proceed through a validation and approval process before being adopted and piloted at test sites. Finally, AWF will disseminate the approved guidelines at targeted workshops and monitor implementation.

Working with Space for Giants, with funding from the U.S. Bureau International Narcotics and Law Enforcement Affairs (INL) and the U.N. Office on Drugs and Crime, AWF is helping improve evidence management and chain of custody in wildlife trafficking cases in Kenya and Uganda. In addition to developing evidence storage and disposal guidelines, AWF, with support from INL, is constructing five new KWS evidence storage facilities at critical sites identified in the baseline survey. On September 22, 2021 AWF facilitated a planning meeting with KWS engineers to kick off construction scheduled for completion by March 2022.