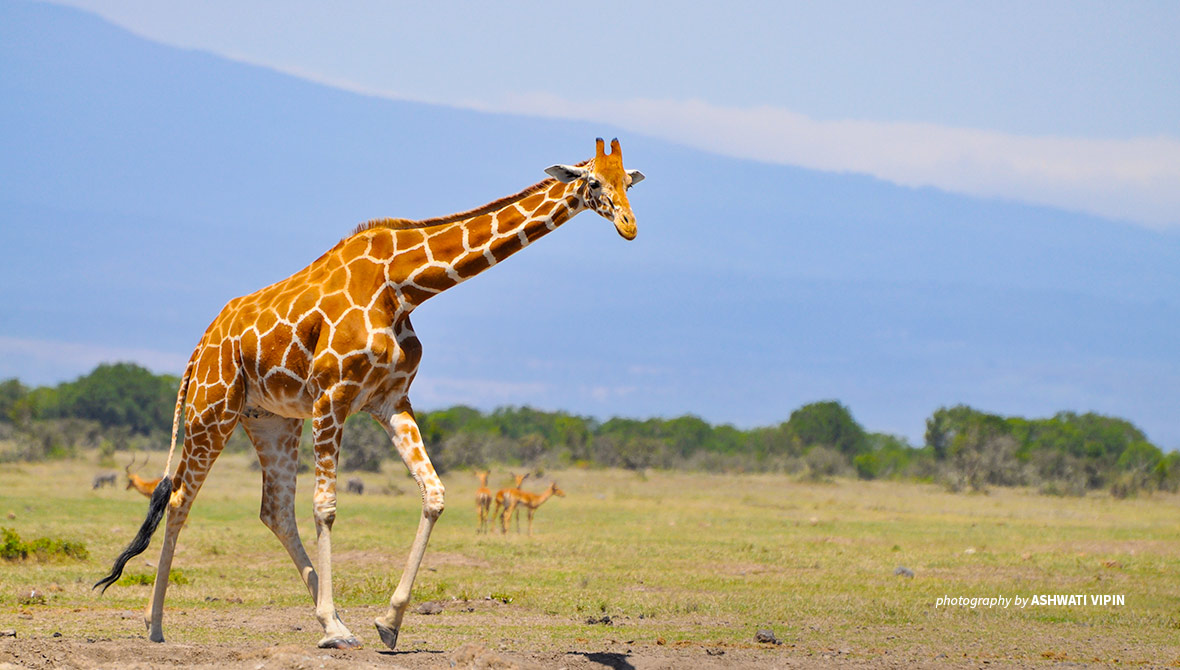 NAIROBI, KENYA/WASHINGTON, D.C./OAKVILLE, ON, CANADA – (June 21, 2021) – In celebration of World Giraffe Day, African Wildlife Foundation (AWF) announced today the creation of the ‘Anne Innis Dagg Fund’ through a partnership with the pioneering Canadian zoologist and her namesake Foundation based in Ontario. To design the conservation fund for African giraffes (a species that comprises several sub-species and varieties), AWF worked closely with the Anne Innis Dagg (AID) Foundation experts to set clear goals, including financial and technical support for critically-needed transboundary giraffe conservation programs, most notably in northern Tanzania – part of the vast transboundary Tsavo-Mkomazi landscape.

The Tsavo-Mkomazi landscape covers an area roughly 45,000 sq. kilometers (twice the size of New Jersey) spread out between southern Kenya and northern Tanzania (both countries are considered strongholds of the giraffe species in Africa; particularly in Tanzania where it is also a national emblem). Comprising four national parks and a number of reserves, as well as community conservancies and ranches, Tsavo is the biggest contiguous wildlife area in Kenya, home to more than 4,000 Maasai giraffes by itself.

AWF CEO Kaddu Sebunya said: “Since 1990, we have witnessed the African giraffe population shrink by roughly 40 percent. Recent estimates put their numbers at just under 80,000. Protecting giraffes requires a multifaceted approach due to the many threats that they face, including habitat destruction, poaching, wildfires, drought and illegal wildlife trafficking. While most communities within the Tsavo-Mkomazi landscape in Kenya and Tanzania work to defend giraffes in protected areas, there are pockets and trouble spots where threats to the species abound. That’s why establishing this fund is so important. Our partnership with AID Foundation to create the Dagg Fund will help to sustain and expand efforts to counter giraffe poaching, and conserve the giraffe as viable and ecologically functional populations in their natural environments.”

Dr. Anne Innis Dagg said: "The work that AWF is doing is instrumental to continuing our efforts to preserve giraffes for future generations. We can all contribute in so many ways to help this planet and their commitment to these initiatives is unparalleled. We are very pleased to have formed this partnership with AWF and look forward to working with them well into the future. Long live giraffes!”

In August 2019 member states at the 18th meeting of the Conference of the Parties to the Convention on International Trade in Endangered Species of Wild Fauna and Flora (CITES CoP18) held in Geneva, Switzerland, voted to restrict the sale of giraffe parts. Giraffes were added to Appendix II of the Convention which means that although some form of international trade in the species is still allowed, the regulations are now much tighter.

Since illegal hunting for bushmeat and illegal wildlife trade remain the most significant threat to giraffes in East Africa, in particular on the Tanzanian side of the Tsavo-Mkomazi landscape boundary, the Anne Innis Dagg Fund will strengthen ongoing anti-poaching operations in the buffer areas of Mkomazi National Park. AWF teams will create a giraffe database to help monitor and report on poaching and other causes of giraffe mortality.

On the Kenya side, AWF is working with Kenya Wildlife Service to strengthen its anti-poaching dog unit, based at Ngulia Rhino Sanctuary in Tsavo West National Park. Much like their counterparts, trained to detect substances such as explosives, illegal drugs, landmines and human blood, wildlife service dogs are trained to detect illegal wildlife contraband (currently rhino horn, elephant ivory and lion bone). With growing evidence that giraffe meat and hides are being trafficked more frequently out of Africa, the Anne Innis Dagg Fund will allow AWF and government authorities in Tanzania to add giraffe scents to the specialized canine training, allowing the units to actually be used for giraffe poaching interdiction.

Wildlife monitoring will continue to be a key conservation component supported by the Anne Innis Dagg Fund in Tanzania, to identify migration corridors, track population performance and threats, and monitor integrity of the ecological habitats.

The AID Foundation’s mission is to support the vision of our pioneering leader - Dr. Anne Innis Dagg - through conservation efforts to protect the environmental habitat of our planet for the benefit of all species. The AID Foundation engages local communities as caretakers of their environment in long term sustainability of biodiversity. At the heart of Anne’s mission are her beloved giraffe. Their numbers are declining as a result of habitat encroachment, illegal hunting and ecological changes like drought and global warming. Giraffes were finally upgraded to “vulnerable to extinction” on the International Union for the Conservation of Nature Red List of Threatened Species in 2016.

MEDIA CONTACT: For more information about AWF, the Anne Innis Dagg Fund, and African giraffe conservation efforts in protected wildlife areas in Africa, contact Patrick Mitchell of AWF in Washington, D.C. at pmitchell@awf.org or (202) 441-7647 or Wambui Odhiambo of AWF at wodhiambo@awf.org.