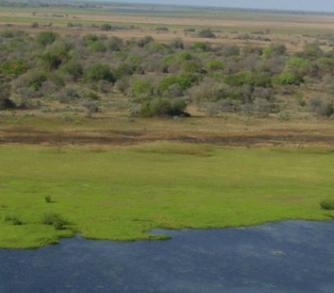 Banhine is an overlooked but rich national park.

Southern Africa’s vast transnational Limpopo Heartland is perhaps best known for the world-famous Kruger National Park. Yet not far away, in Mozambique, is an equally fascinating park that is virtually unknown: Banhine National Park.

The 2,700-square-mile park is home to extensive wetlands and is a key source of water for the arid lands surrounding it. Preliminary surveys show that Banhine still supports healthy populations of ostrich, kudu, impala, reedbuck, duiker, steenbok, porcupine, warthog, and the increasingly rare oribi. Yet, the park has received little of the attention—or the income—that Kruger enjoys. As a result, it has virtually no capacity for proper wildlife management. The reality is that Banhine is, in essence, a park only on paper—it has little infrastructure or facilities, management, or enforcement. To make Banhine an effective protected area for wildlife and wild lands, the park must be rebuilt from scratch.

In October 2004, AWF signed an agreement with Mozambique’s Ministry of Tourism and embarked on a project to restore the park’s infrastructure. Because baseline data on the biodiversity, geology, and hydrology of Banhine National Park simply doesn’t exist, one of the keystones of AWF’s plan is the establishment of an international conservation research center.

Today, while center construction is completed, the work is not done. Rehabilitating Banhine will involve everything from building infrastructure, acquiring equipment, and training staff to redesigning the park’s boundaries to provide a better representation of biomes. Once these problems are addressed, Banhine National Park will soon be back on the map—and back on the list of Africa’s must-see wildlife destinations.