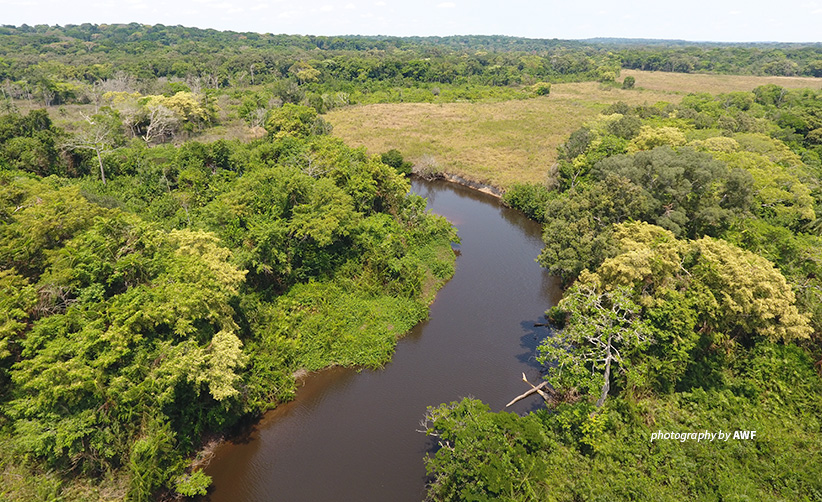 Antoine Tabu Senga is African Wildlife Foundation's DRC Country Coordinator. He is also the Deputy Chief of Party of the Community-Based Countering Wildlife Trafficking program funded by the U.S. Agency of International Development and run in conjunction with African Parks Network and Levin ... More

Once a refuge to huge populations of forest and savanna elephants, chimpanzees, bongos, and elk — as well as increasingly rare big cats like leopards and lions — the Mbomou-Uele region along the Democratic Republic of Congo’s northeast border is now a shadow of its former self having lost swathes of biodiversity over decades-long civil war. Violent militias infiltrated the remote landscape encompassing the Bili-Uele Protected Area Complex, Garamba National Park in DRC as well as the Chinko reserve in eastern Central African Republic. As they wreaked havoc on villages near these protected areas and displaced thousands of people, the heavily armed rebels also decimated species for the illegal wildlife trade.

The Bili-Uele Protected Area Complex is a significant but isolated group of wildlife reserves including the Bili-Uele Hunting Area and the Mbomou East and West Faunal Reserves. Livelihoods surrounding the protected areas are severely strained — many communities are isolated and pushed into illicit activities or to overexploit their natural environment for survival. As these populations grow, bushmeat hunting is morphing into a commercial enterprise, while gold washing, illegal fishing, and subsistence agriculture continue unsustainably, ultimately degrading and fragmenting wildlife habitat. At the same time, the influx of pastoralists roaming the transboundary Mbomou-Uele landscape in search of pasture amplifies intercommunity conflicts over natural resources. Livestock incursions often destroy farmland and contaminate rivers which are additionally compromised by artisanal mining activities. Weak governance structures limit the impact of national security and law enforcement forces. As a result, illegal wildlife crimes persist and civil strife mounts. Trafficking of elephant ivory and pangolin scales, among other illegal products, happens through poorly managed borders; poaching is often syndicated by foreigners who employ local accomplices struggling to make ends meet. 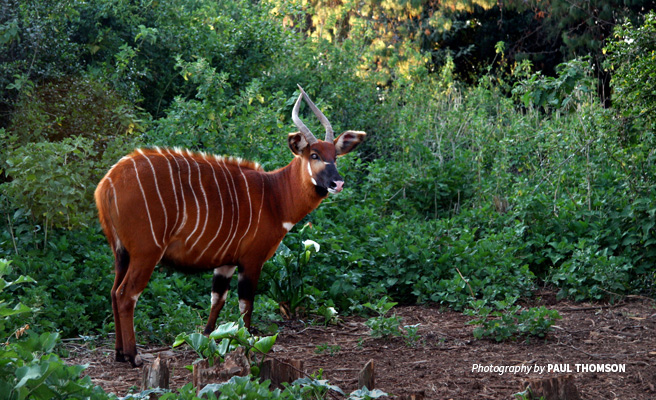 To protect the region’s wildlife populations and bring prosperity to its communities, African Wildlife Foundation partnered with African Parks Network to implement a Community-Based Countering Wildlife Trafficking program with support from the U.S. Agency for International Development. The cross-border activities target groups whose subsistence activities pose a threat to biodiversity and are built on three pillars: land-use planning, conservation-friendly livelihood development, and social cohesion between pastoralist and agricultural communities. AWF has been protecting wildlife in the Bili-Uele Protected Area Complex for years with support from the European Union, comanaging the area with the Institut Congolais pour la Conservation de la Nature (or ICCN) — leveraging expertise from technical partners Maisha Consulting Group and Juristale. The new cross-border community-based program builds on AWF’s history in the landscape through a regional conservation approach that improves livelihoods and welfare to minimize wildlife threats.

An AWF-supported wildlife survey of the Bili-Uele Protected Area Complex in 2012 identified an 11,000-kilometer-sq. core conservation zone with critical populations of eastern chimpanzees and forest elephants. Our first step was to restore the ICCN’s authority at its stations in Bondo and Ango Territories in Bas-Uele (or Lower Uele) Province, located at the northern border covering the western reaches of the Uele River. Administrative staff and ecoguards — responsible for patrol missions, controlling checkpoints, and ecological monitoring — undertook paramilitary courses and first-aid training to improve their management of the priority wildlife conservation zone. With European Union support, AWF also facilitated the disbursement of ecoguard bonuses, rations, and equipment for anti-poaching patrols. To improve wildlife law enforcement frameworks, we trained magistrates, ecoguards, and other state agents — including customs officials, police and intelligence officers, and members of the armed forces — on the legal procedures for wildlife crime cases. We organized two capacity-building workshops for 26 ecoguards from Bili and another training for 15 magistrates in the nearby town of Buta to streamline the handling of wildlife crime court files and enhance collaboration between the ICCN and local courts. 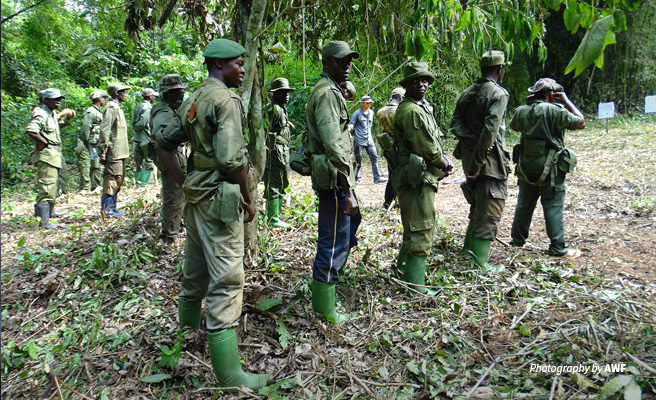 Since the creation of the Bili-Uele hunting reserve in 1974, no community approach has been applied to support and incentivize biodiversity protection in the surrounding areas. As the local population grows with the recent influx of pastoralist communities, it is increasingly important to streamline how different groups use their shared natural resources. In its first year, the U.S. Agency for International Development Community-Based Countering Wildlife Trafficking program has established multi-level conservation and development committees to represent various interests. By strengthening governance structures and improving communication between the wildlife management authority and the communities living in the periphery of critical protected areas, all groups are joining the fight against illegal bushmeat hunting and poaching. We have also sampled 110 households in a socioeconomic survey of 14 villages in the target territories to better understand the needs of vulnerable populations and the survival tactics they employ before developing strategies aligned with conservation goals.

In June 2019, AWF and the ICCN invited consultants from the Institute for Research and Application of Development Methods to understand the socioeconomic and cultural dynamics of the pastoralist communities moving into the area from neighboring countries, like the Central African Republic and Chad further north. Officials from Bondo and Ango territories, wildlife management authorities from Bili, civil society groups, and community members from the local committee of conservation and development — including the representative of the pastoralists from Lower-Uele Province — as well as local chiefs attended the consultative meeting to share their perspectives.

The Community-Based Countering Wildlife Trafficking program also builds awareness and helps develop cross-boundary information-sharing networks to limit subsistence activities that are detrimental to the environment. After hiring and training community facilitators and sensitization officers in Garamba, Bili, and Chinko, we will embark on a landscape-wide outreach campaign. So far, 170 members of the Local Committee of Conservation and Development and the Council of Governance of Conservation and Development from Bili have participated in AWF-supported sensitization sessions. They learned the revised mission and role of governance structures in managing their natural resources, as well as the application of national policies and legislation. 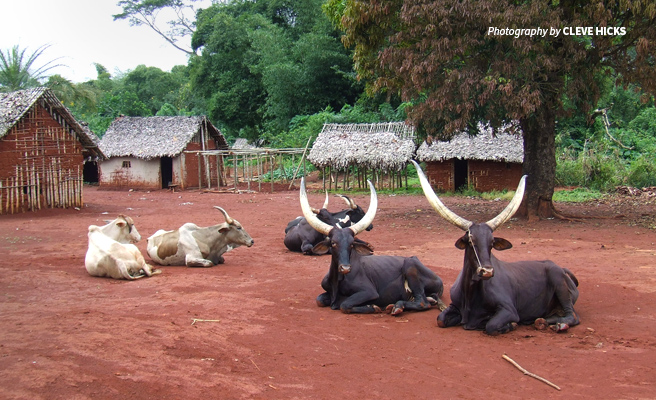 Community engagement leads to a decline in elephant poaching

The targeted communities are realizing the irreversible consequences of uncontrolled hunting and trafficking of wildlife species, particularly elephants as they become rarer in the landscape. As more people gain access to new sources of revenue, they are more inclined to collaborate with the protected area authorities, sharing important information to ensure their safety and security. At the same time, AWF has helped the ecoguards increase patrol coverage. According to biomonitoring data collected on joint patrols with the Armed Forces of the Democratic Republic of the Congo, there has been a decrease in elephant killings with zero poaching cases reported this year compared to three in 2018.

Awareness campaigns go hand-in-hand with developing alternative conservation-friendly livelihoods that are economically and ecologically sustainable. With a more formalized structure aligning with national laws and customary rules, livelihood enhancement programs are generating greater benefits. In addition to setting up community governance systems, AWF has partnered with Levin Sources, a small-scale mining consulting company, to transform the artisanal mining sector. Together, they will support stable operators who adopt sustainable extraction practices at various sites in the Bili landscape. Mitigating the expansion of mining activity, the program also promotes the legal and respectful use of the natural environment through sensitization trainings. 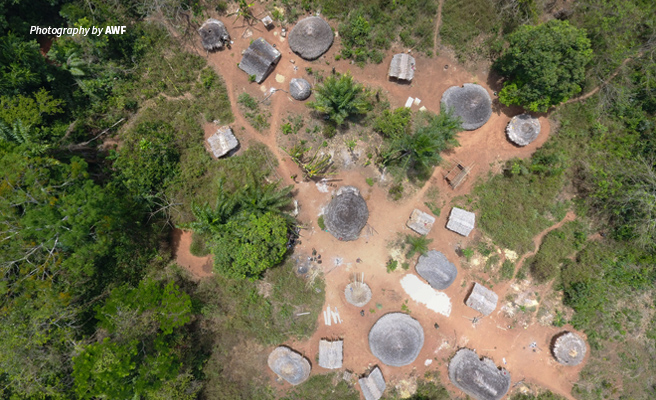 Land-use planning is an important conservation tool to mitigate conflicts, poverty, and unsustainable exploitation of natural resources because it takes into account stakeholder needs and helps to identify priority areas for both wildlife and people. It is necessary to establish rules between the different users in Bondo and Ango based on land laws and legal tenure documents for the vast reserve and the adjacent forests in the Bili-Uele Protected Area Complex. Based on the forest zoning operational guide developed by the Congolese Ministry of the Environment with the support of the U.S Forest Service, we are mapping occupancy and land tenure while carrying out socioeconomic and biological studies to assign proper spaces for various stakeholders.

AWF has put in place governance structures at all levels, bringing together representatives from 13 Local Committees of Conservation and Development, as well as officials from chiefdom councils, and both Forest Zoning Committees from Bondo and Ango. In May 2019, the Governor of the Lower Uele Province officially recognized this process with the nomination of representatives and conservation specialists to the Intersectoral Coordinating Committee for Territorial Development. Having overseen AWF’s efforts in Bili and previously managed livelihood programs in Maringa-Lopori-Wamba, I was appointed as the Protected Area Management Expert. In this capacity, I have met the new Governor of the neighboring Haut-Uele (Upper Uele) Province, where Garamba National Park is located and will continue to develop relationships that advance AWF’s partnerships that secure both community livelihoods and wildlife populations.