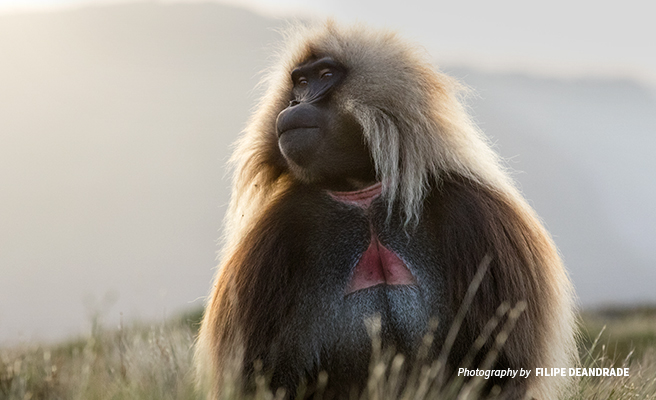 When it comes to primate species with fascinating idiosyncrasies, geladas do not disappoint. These highland monkeys, also known as gelada baboons and bleeding-heart baboons, are highly social, occupying herds that are several hundred or even 1,000 strong. Found only in Ethiopia, this iconic species is a big tourism draw for Simien Mountains National Park, along with other endemic but threatened wildlife like the Ethiopian wolf and the Walia ibex. Geladas are unique in the monkey world. Their diet is almost entirely grass, but they have impressive canine teeth — especially the males, who rely on their fearsome fangs not to eat but to signal dominance or to fight. They are terrestrial, or ground dwellers rather than tree dwellers. When feeding, they use a "shuffle gait," meaning they move along seated, without lifting their feet. To keep safe at night, they sleep on cliffside ledges where hyenas and leopards will not be able to get them.

Geladas have very noticeable hourglass-shaped bare patches on their chests, which go from pink to livid red when females are in estrus or males are dominant. On females that are ready to mate, a ring of fluid-filled blister pearls forms around these patches.

With their leonine capes of flowing blonde hair, gelada males cut an impressive figure when running. Dominant males lead harems that include up to a dozen or so females, their young, and 1-4 subordinate males. 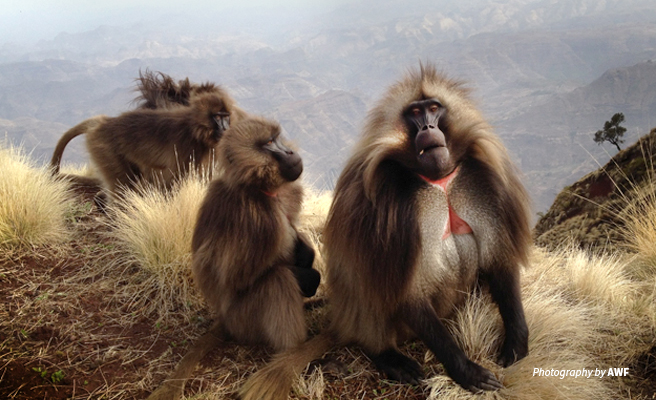 Outside of these harems are roving bands of frustrated bachelors, who regularly wage attacks on the leading males in hopes of taking over a harem. Only the alpha male in a harem has mating rights, although studies have shown gelada females do "cheat" with less dominant males, and the pair will try to hide the infidelity by making fewer vocalizations while mating.

Research about geladas in recent years has covered a variety of subjects. One study showed that geladas combine lip smacking with vocalizations in rhythms similar to human speech rhythms. Another found that females spontaneously miscarry fetuses when a new male takes over their harems. (This response, whose mechanism is unexplained, could benefit females by freeing them to mate with the new leading male.) Scientists have also captured remarkably intimate video of geladas giving birth. 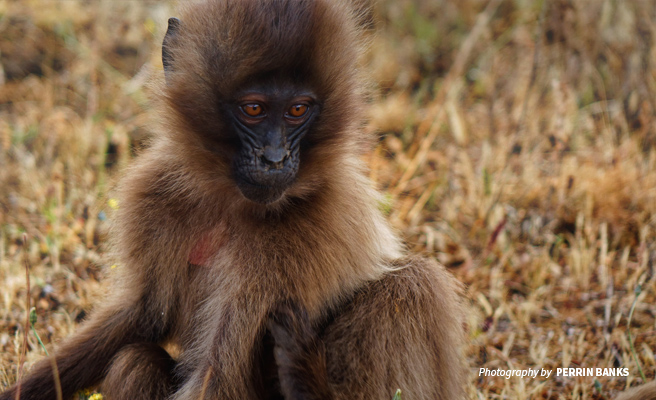 Like many of Africa’s iconic species, the gelada, Ethiopian wolf, and Walia Ibex in Ethiopia’s protected areas are facing severe conservation challenges. Anthropogenic factors — mostly agricultural expansion and overgrazing — are driving habitat loss and degradation as well as massive erosion. 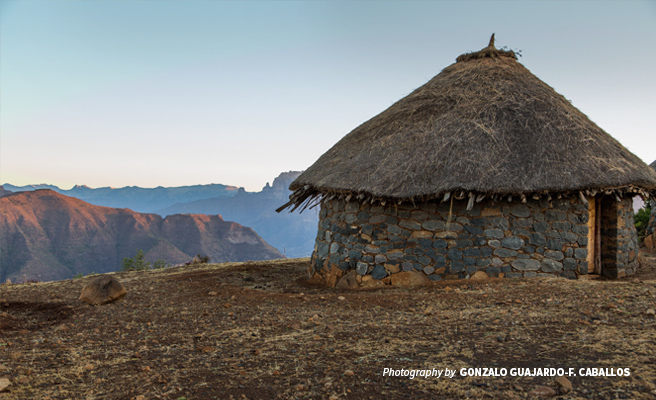 Since AWF forged a tourism development plan for the Simien Mountains National Park in 2015, AWF has been working with local businesses and people to strengthen community-owned and -operated tourism. Bringing alternative economic opportunities to farming and grazing communities ultimately reduces pressure on wildlife habitats. When local people receive a direct financial benefit because they safeguard natural resources, they appreciate the value of the protected area. At the same time, maintaining the landscape for tourism sustains essential ecosystem goods and services — pasture for livestock, fuel wood and medicinal plants, as well as rivers to irrigate farms.

Organized into community-based tourism associations, groups based near the protected area leverage their immense cultural and ecological knowledge of this breathtaking landscape in Ethiopia. Locally owned enterprises engage locals as trekking guides or guards; others run camping facilities providing accommodation and meals to visitors. AWF has trained community members to ensure that the tourism associations are equipped with the technical skills and know-how to run their enterprises sustainably.