The “big tusker” known as Mountain Bull weighed six tons but his size was nothing compared to his stubbornness. Born in Kenya, he was notorious for trampling fields, knocking down fences, and raiding crops as he traveled along age-old migration routes.Though he was a menace to farmers, over the years Mountain Bull gained admirers in Kenya and beyond. His refusal to alter his migration path became almost legendary. Conservationists struggled to find solutions that would protect farms as well as Mountain Bull and other destructive elephants like him. Eventually, they created a 28-kilometer corridor, including a bypass that affords elephants safe travel beneath Kenya’s Meru-Nanyuki highway — Africa’s first underpass for elephants.

By the time he moved into his prime, Mountain Bull had become a battleground himself. Ivory poachers targeted him, at one point putting eight bullets into that massive body. Conservationists knocked him out and sawed off a good part of each huge tusk, hoping to curb the fence attacks and also make the big bull less attractive to ivory poachers.

But the elephant corridor, the tusk-trimming, and even a tracking collar did not save Mountain Bull. One day in May 2014, the collar indicated movement had stopped. With heavy hearts, trackers set out and eventually found the 46-year-old bull’s lifeless body. The great tusker was riddled with spear marks, and his tusks had been hacked away. A few weeks later, men armed with poison arrows killed another great tusker, a truly mammoth and equally legendary bull known as Satao, inside Tsavo East National Park.

The conservation world mourned these two giants. “These cases illustrate that Africa’s elephants are still under attack from illicit trade,” said AWF’s vice president for species protection Philip Muruthi. “They remain conservation-dependent, needing even greater vigilance than before. To benefit from its elephants, Africa must tame poaching first.” 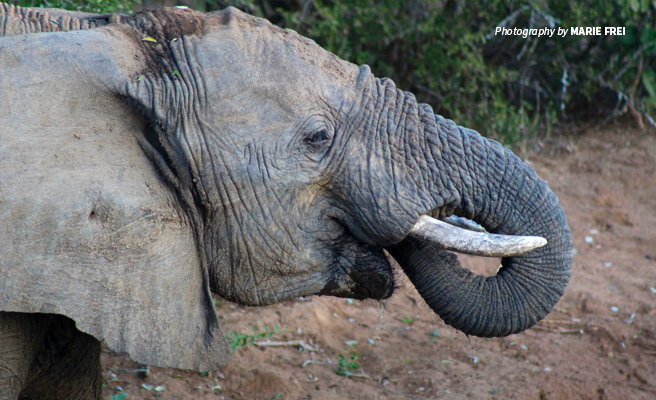 The link between high elephant poaching rates and tusklessness

Size and weight characterize the big tusker. Some of the big bulls have had tusks that skimmed the ground. Others have had tusks weighing more than 100 pounds each. Whatever your criteria, big tuskers are not hard to distinguish from the rest of the herd.

They used to roam much of Africa, but today it is believed there are fewer than 40 of these awesome pachyderms on the whole continent. What is more, an increasing proportion of Africa’s remaining elephants do not have tusks at all. This is cause for alarm or hope, depending on your viewpoint.

Tusklessness occurs naturally but, historically speaking, is rare. Typically, 2 to 6 percent of elephants are born without tusks (almost all female). But in Mozambique’s Gorongosa National Park, biologist Joyce Poole — an elephant ethologist, co-director of ElephantVoices, and former AWF researcher — has found that tusklessness is much higher, about 32 percent.

Why the difference? Gorongosa was the site of a brutal slaughter during Mozambique’s civil war, 1977-1992. The fighters killed most of the park’s resident elephants for ivory, using profits to buy goods including weapons and ammunition. Tuskless females would not have been targeted. They survived to breed and passed along their genetic makeup, which increased the overall rate of tusklessness in the population.

Similar trends are evident in other areas that have seen heavy poaching, including Ruaha National Park and Selous Game Reserve in Tanzania, and Queen Elizabeth National Park in Uganda. In Ruaha, for example, researchers have found tusklessness in about 35 percent of elephants 25 years or older.

Tusklessness is off the charts in Addo Elephant National Park in South Africa. Here in the early 1900s, hunter P. J. Pretorius killed nearly 100 elephants, leaving only 11. Some 100 years later, the rate of tusklessness in Addo females is 98 percent. (It should be noted scientists attribute tusklessness in Addo at least in part to “genetic drift,” which is a randomly initiated shift in gene pools often affecting smaller and isolated populations.)

“The trend toward increased tusklessness is seen pretty much anywhere there has been heavy poaching of elephants,” says Muruthi. People sometimes reference this phenomenon as a kind of accelerated natural selection, but it is actually more like artificial selection because it is caused by humans.

In addition to more elephants without tusks, researchers are noting an increase in the numbers of both males and females with smaller tusks. 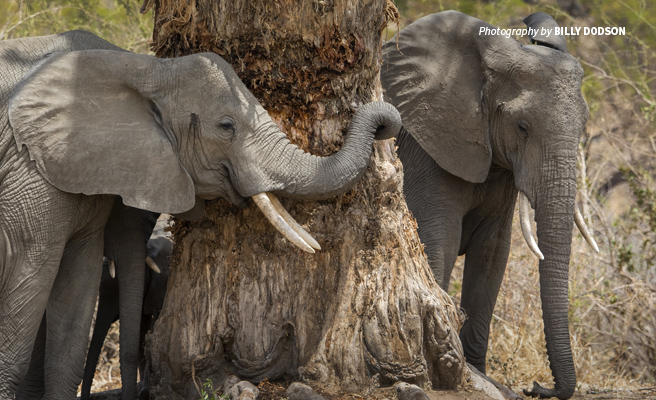 Tusks are teeth, incisors specifically, made of dentin. (Ivory is a variety of dentin.) They grow in after the first year and the loss of baby teeth, and thereafter grow continuously at about 7 inches per year. Some elephants have only one tusk; they are either born that way or lose a tusk at some point during their lives.

Elephants use their tusks for a variety of reasons: to strip bark off trees to chew and eat, dig holes for water and minerals including salt, and dig up or lift things such as trees and branches. Tusks are important to males during fighting and for sexual display.

Without tusks, males have a higher risk of being wounded, but fortunately, tusklessness is rare in males. So how much at a disadvantage are elephants without tusks? We are still figuring that out. The females (“cows”) in Addo seem to be thriving. But scientists are still learning about the impacts of tusklessness on elephants and also ecosystems. They are studying the Addo cows to better understand the full implications of an increase in tusklessness and how elephants compensate for lack of these seemingly vital tools. Researchers are also working to understand why tusklessness occurs so much more in females than males.

Even if a lack of tusks saves elephants from ivory poachers, an increase in tusklessness is not necessarily positive, said University of Idaho behavioral ecologist Ryan Long during a CBC interview. When a species loses a defining feature, it is difficult to celebrate, he said. A largely tuskless herd “does not look like an elephant population anymore,” he said. “Something’s missing.” 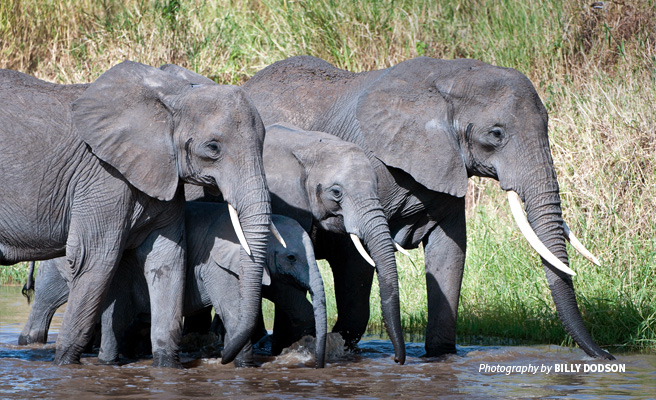 Some observers have noted that the massive bull Satao appeared to hide his tusks behind brush and other vegetation — as if he knew his tusks somehow put him in danger. It is a poignant image that highlights the vulnerability of, and stress on, African elephants.

AWF takes a three-pronged approach to elephant protection in Africa: stop the killing, stop the trafficking, and stop the demand for ivory.

We support 14 elephant populations in their ranges throughout the continent. These herds collectively represent 46 percent of the continental total. Specifically, we train rangers and scouts in anti-poaching best practices and ecological monitoring, and we provide tools and equipment that rangers need to succeed in their often dangerous and challenging jobs.

To help deter trafficking, AWF’s Canines for Conservation program places highly trained detection dog and hander units at airports, seaports, and border crossings in Kenya, Tanzania, and Uganda, and most recently in Mozambique’s capital city, Maputo. The teams have made 279 finds since the program launched in 2014, representing millions of dollars in confiscated ivory, rhino horn, pangolin scales, and other illegal wildlife parts.

Canines for Conservation works in tandem with AWF-sponsored training programs for investigators, prosecutors, and other law enforcers that handle wildlife crimes. Prosecutorial staff learn the ins and outs of their country’s wildlife laws, how to be strong witnesses in court, and how to handle and store confiscated ivory and other exhibits properly so the materials will be admitted as evidence.

Finally, AWF works to end demand for ivory, especially in China, where consumers help drive poaching. In 2018, we launched a partnership with the Beijing Zoo focused on raising awareness of the illegal international wildlife trade and the plight of African wildlife.

In terms of legislation, elephants have scored a number of victories in recent years. Leading ivory markets China, Hong Kong, and the U.K. approved or enacted ivory bans in the last year. Pressure is now on the E.U., Japan, Vietnam, Thailand, and other countries to follow suit. With our efforts on the ground, in the judicial systems, and at the policy level, AWF is determined to help African communities and governments carve out a secure and vibrant future for African elephants.